Get the basics you need to know about surviving in Athens while studying and living in your new city!

Athens cannot be described as ‘expensive’. On the contrary, in relation to the other European capitals, it is rather cheap, with a low living cost and a variety of budget options for its visitors!

Is Athens a safe city?

Rest assured that Athens isn’t particularly dangerous. Actually, it is supposed to be one of the safest capital cities in the world! Petty theft and pickpocketing are the most significant crimes that tourists face, usually in very crowded and touristic places. Serious crimes are extremely rare in Athens.

The options for getting around in Athens include the metro, bus/trolley, tram, and taxi.

The best way to get around Athens is on foot and by metro. Most of the city’s major attractions are located within walking distance or a short metro ride of one another. Also, there’s a network of buses that go everywhere, but it takes more time due to the traffic.

Here is the Athens metro map

Finding a taxi in Athens is fairly easy. You can flag one down at the street as long as its TAXI sign is lit.. Alternatively, you can order one. Flagging down a taxi on the street is cheaper than ordering it, as you would also have to pay for the call. In any case, there is a minimum tariff approximately of 3,20€ (tariff rates may fluctuate slightly from time to time) and from 00:00 till 05:00 the tariff/charges are doubled.

Taxi ranks can be found near all the major tourist spots throughout the city, outside Athens railway station, Kifissos bus station and the main squares, like Syntagma square. It’s easy to spot a rank as you will see the bright yellow cars with the signature ‘TAXI’ light on top, lining up at the side of the road. All you have to do is walk to the front of the line and enter the first free taxi.

During bad weather or late at night, we suggest booking your Athens taxi by calling one of the local radiotaxi companies or using one of the taxi apps (e.g. The Beat app) available in Greece.

Tips: If for any reason you feel uncomfortable with the taxi driver, you can always tell him to stop and get off on the spot. Prefer to sit in the back seat rather than the front one. Also, if it is late at night, try to always have a look at the license plate and jot down the details on your mobile phone in case you need to make a report for any reason.

– Not all Athens taxi drivers speak English, so be sure to clearly write down the directions of the place you want to visit in Greek.

– Before beginning your journey, make sure your taxi driver sets the meter to the base fare of €1.29.

– If you feel your driver is taking a long route, you can check the directions on GoogleMaps.

– Taxis in Athens don’t usually have POS machines or carry change for large notes, so be sure to keep coins and small bills in Euros with you!

If you take a look at the map of Athens, you will see that there are plenty of beaches on the south and east side of the city.

You can get to the closest beaches (∼40 minutes away, south of Athens) either by bus or tram!

To visit the beaches that are at the east of Athens, like Porto Rafti, Schinias (Σχινιάς) or Sounio, you can take one of the suburban buses (ΚΤΕL).

Don’t forget to ask for reduced-price ticket showing your “Pass”.

Athens may be known for its souvlaki, or even its “tzatziki” in tavernas, but there’s way more than Greek classics going on here. Food-wise, Athens has everything. from street food, traditional tavernas, more polished neo-tavernas, fine dining and everything in between!

Athens also has a very diverse range of ethnic restaurants! Flavors from Mexico, India, Africa, Arab countries, Southeast Asia, Latin America can be found all over the city.

If you want to experience food as a local, you need to try these local munchies: “Pites” as they are known in Greek, have so many variations, that it wouldn’t be an exaggeration to say that there’s not even a way to count precisely how many different kinds of Greek pies there are out there! Tiropita, which means cheese pie, could be described as the most basic form of pie, from which all other variations would emerge. You can try them in all local bakeries or street food spots! 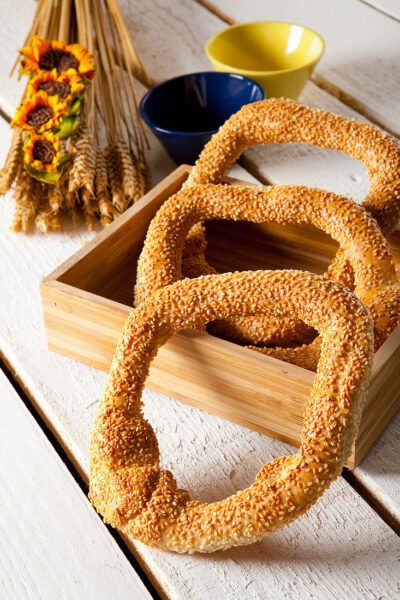 Koulouri is a traditional delicacy that has been the trademark in every bakery’s production through centuries; a product both delicious and pure, with flour, water, salt, sesame, and yeast being the only ingredients used for its preparation. 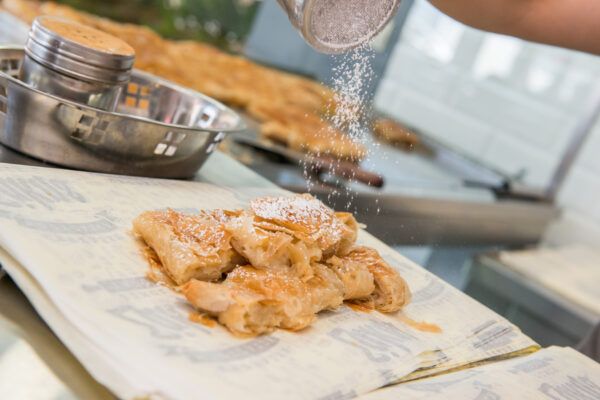 The sweet miracle of Northern Greeks, ”bougatsa” is made with a special, tender yet crunchy phyllo pastry, filled with thick custard.

A sausage sandwich (like a hot dog but quite different) served in numerous food trucks scattered all around Athens. Greeks love it and usually have one (or more!) after their night outs. 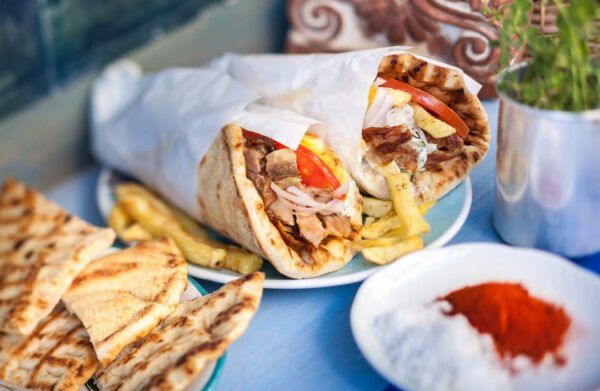 Essentially, it’s meat on a skewer, or “gyros” grilled over charcoal and served in various ways, most commonly wrapped in pita bread along with sliced tomatoes, onions and yoghurt. In recent years there have been many vegetarian versions too! You can try it literally everywhere! 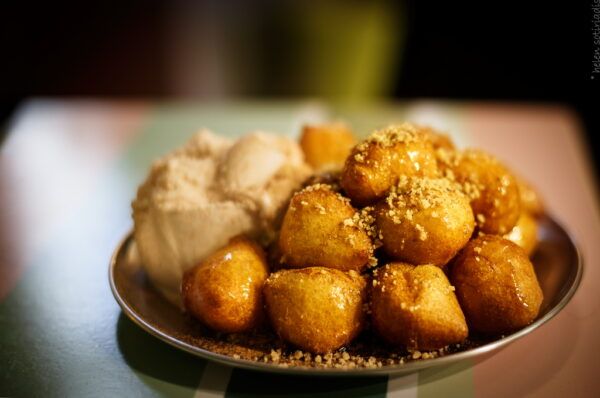 Loukoumades, either with a hole in the middle or not, these sweet honey balls are one of the most delicious sweet treats you can eat in Athens! They are usually served soaked in hot honey syrup and sprinkled with cinnamon.

Greece is pretty good in terms of convenience. Greeks very often order food from home, either by calling the food place they want directly, or by using applications. E-Food and Wolt are the most famous food delivery apps.

Try and check out a laiki agora while in Greece. These are local farmer’s markets. Most neighborhoods in Athens have their own weekly Laiki. This is a great place to people watch as well as to pick up some fresh, mouthwatering but also affordable fruit and vegetables!

The city center is the best place for shopping in Athens. You can find everything here, from independent boutique stores, local Greek designers, globally-renowned brand labels and of course a great number of gift and specialty shops.

If you want to go shopping have in mind that store hours are usually on weekdays and Saturdays from 09.00 – 21.00.

Local family-run businesses close in the afternoon for a couple of hours and reopen at 17.00.

On Sundays all shops except the ones at the tourist areas (like Plaka and Monastiraki) the shops are closed!!!

Two large malls (for Greek standards) are easily accessible by metro or train:

Under the starry sky, with the scent of jasmine and the noisy songs of the cicadas, open-air cinemas are waiting for you in every corner of Athens from May to September! Greeks love them and flock outside the cash registers, waiting to grab their popcorn and drinks from the snack bar and enjoy a Hollywood classic or the latest blockbuster!

Don’t miss the opportunity to visit one!

ou should definitely not miss going out at night in Athens! There are lots of vibrant neighborhoods with really cool bars and restaurants, where you will also have the opportunity to mingle with the locals!

Some nightlife places in Athens

• Technopolis / Gazi: The Soho of Athens

When meeting someone (s.o.s. words)

Εxploring the northern suburbs of Athens

The northern Athenian suburbs of Kifissia and Halandri are leafier and quieter compared to the center, but with no shortage of shops, fun activities and hangouts. Also, they are only one bus ride away!

Halandri looks like a huge mosaic. In just a few square meters you can find a plethora of very interesting places for coffee, drinks and food, all with their own very special aesthetics and philosophy. Its pedestrian streets are the ultimate place to have a walk and do shopping, and its arcades hide treasure shops.

Rematia river, that runs through Halandri (starts from Penteli and ends in Tourkovounia) is a well-hidden gem!!

Every summer, some of the best cultural events are presented at the Euripides Theater of Rematia. There you will see from Sophocles’ Antigone to Cuban music concerts. Most of the events taking place there are with free admission.

Kifissia is conveniently located a 30-minute metro ride away from downtown, and is considered a retreat area as it is surrounded by lush greens, cooler temperatures and less tourists.

There are plenty of things to do when wandering around the neighborhood of Kifissia. You can stroll through Kefalari Square, Kifissia’s smaller but just as mesmerizing version of the National Gardens. Or you can make your way to the slopes of Mount Pendeli and hike up it for a beautiful sunset.

No need to say that there is a plethora of shops, cafes, restaurants and taverns in this district for you to explore! There are also many bars, movie theaters, bowling alleys, malls and more for you to have fun.

In the Springtime (April/May), you may even be lucky enough to see the Kifissia Flower Show! This exhibition takes place in Kifissia Park and features dozens of species of flowers alongside live rock concert performances and book fairs on the street.

For shopaholics, you will be pleasantly surprised at the abundance, variety and quality of Kifissia shopping scene! You can find plenty of stores, such as Paramour, Soho-Soho, Luisa World, Juicy Couture and Ralph Lauren! There are also many jewelry and shoe stands along the street, that make for a perfect window shopping experience.

Want to find out more about the CYA neighborhood?  Click here to view the Student Guide to Pangrati!