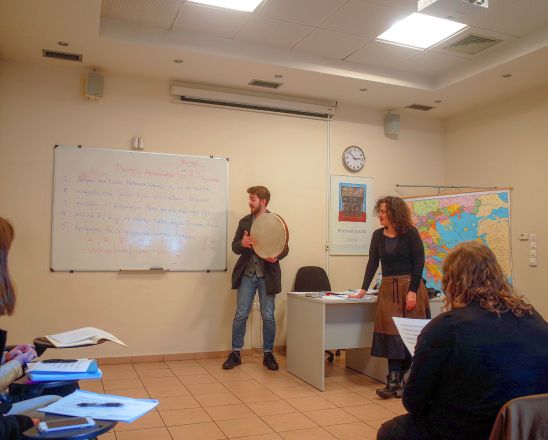 The “Intermediate Ancient Greek II: Homer” course introduces the student to one of the earliest literature products of mankind, the Odyssey. From the classical period up to modern times the Odyssey has been widely read and commented upon, while many of its key-themes, inserted stories and sub-narratives have been a source of inspiration for manifold works of art (from poetry and opera to painting and sculpture).

The primary aim of “Intermediate Ancient Greek II: Homer” is to approach various episodes of the Odyssey (e.g. the Cyclops, Sirens, Circe and Calypso, journey to the Underworld) primarily from a linguistic, but also from a cultural perspective. The students will recognize language structures, analyze the grammatical and syntactical forms and enrich their vocabulary, while practicing and advancing their skills in translation from Greek into fluent English. Moreover, cultural aspects relating to the text will also be addressed: does the work echo events that marked the early 1st millennium BC; which are the traits of the epic hero of the Odyssey in comparison to the hero of the Iliad; how does the epic relate to the values of contemporary society and its people; how is the figure of Odysseus transformed from the archaic and classical period to late antiquity and beyond (cf. e.g. Odysseus as the spiritual hero of the neoplatonic philosophers or the Odysseus of James Joyce)?

Apart from traditional learning methods, such as exercises on the board, quizzes and sight-reading, we will also use games especially designed for enhancing grammatical knowledge (e.g. flash cards, jigsaw puzzles, crosswords, shoots and ladders) as well as additional sources such as inscriptions, papyri, mosaics, and vase paintings.