The Geography of Faith: Paul and the Emergence of Christianity in Greece (Athens, Corinth, Philippi, Thessaloniki)

Home > Religion (REL) > The Geography of Faith: Paul and the Emergence of Christianity in Greece (Athens, Corinth, Philippi, Thessaloniki) 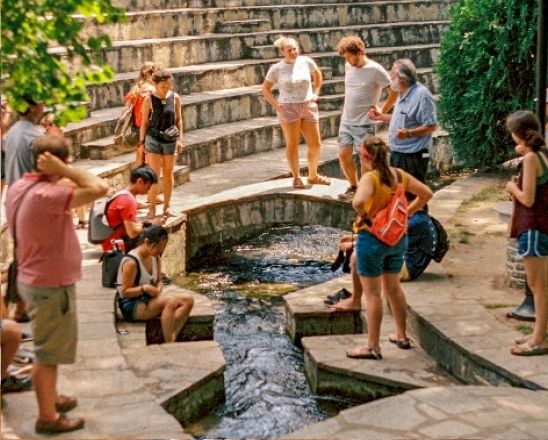 The Geography of Faith: Paul and the Emergence of Christianity in Greece (Athens, Corinth, Philippi, Thessaloniki)

The purpose of “The Geography of Faith” class is to introduce students to the religious, social and political life of the Greek city from classical times through the Roman period. Having gained understanding of the Greek city we will then study the work and thinking of St. Paul and the impact the emergence of Christianity had on the Greco-Roman world.

This will be accomplished through a combination of reading, lectures and discussion as well as site visits around Greece. As such, students will be introduced to Paul’s letters and the social world implied therein.

Our study will begin in a classroom, in Athens, and then continue in the ancient streets and byways of some of the major cities where Paul worked and taught: Philippi, Thessaloniki, and Corinth.

In this environment, students will also be introduced to life in the Greek city during the first century of the Common Era. The class will also make visits to Eleusis and Delphi which were major centers of Greek religious life in the first century. We will be aided in our study with visits to museums, like the Archeological Museum in Athens and the Archeology Museum in Thessaloniki. In addition to focusing on the life and work of Paul we will also explore the impact that Paul’s work ultimately had in the region with visits to various Byzantine sites, which will include the New Museum of Byzantine Culture in Thessaloniki, and a trip to the Monastic site of Meteora, among others from Late Antiquity.

Students will participate in an intensive seminar setting with assigned readings and discussion of primary texts, as well as on-site discussion and conversation.

Professor Afzal was one of the best professors I’ve ever had [..] Every other lecture class I’ve taken consisted of me listening for an hour and scribbling down notes as fast as I could. But this class truly challenged me to think and question things! What made it even better was that we got to travel all around Greece and see the physical settings/context of the Bible. No class will ever compare!

The course starts and ends in Athens. Transportation between Athens and the rest of the course’s destinations, as well as during day excursions is included in the course fee.

IMPORTANT NOTE: This course involves extensive travel.  Be wary of overpacking.  Pack only what you can carry comfortably, because you will be required to check- in and out of accommodations for each stay/travel segment of this course. It will also be useful to bring with you travel-size cosmetics.

Students are housed within walking distance of the CYA Academic Center in either CYA student apartments located in the Pangrati neighborhood of central Athens or in hotel accommodations arranged by CYA. CYA apartments are simply furnished and equipped with a full kitchen and air-conditioned bedrooms; towels, linens and housekeeping service will be provided. Hotel accommodations in Athens or during excursions will be in simple 2- or 3-star hotels, double- or triple-occupancy, with air-conditioned rooms.

The CYA Academic Center is located next to the Athens Marble Stadium and houses classrooms, the library, the student lounge and cafeteria, computer facilities (including wireless access for those students who choose to bring laptop computers), laundry facilities, and administrative offices. The Academic Center is accessible Monday-Thursday 9:00 a.m.-8:00 p.m., Friday 9:00 a.m.-6:00 p.m.

When class is in Athens a full mid-day meal will be served weekdays in the CYA cafeteria between the hours of 12:00-3:00 p.m.  While traveling, breakfast will be offered at the Hotel. A welcome and a farewell dinner are also included in the course fee.