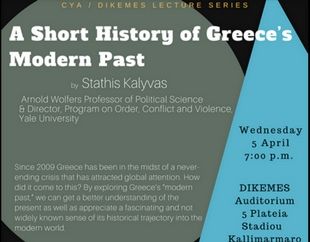 We are pleased to invite you to the lecture “A Short History of Greece’s Modern Past” by Stathis N. Kalyvas, Arnold Wolfers Professor of Political Science at Yale University. This public lecture will take place on Wednesday 5 April at 7.00 p.m. in the CYA Auditorium.

Since 2009 Greece has been in the midst of a never-ending crisis that has attracted global attention.

How did it come to this? By exploring Greece’s “modern past,” we can get a better understanding of the present as well as appreciate a fascinating and not widely known sense of its historical trajectory into the modern world.