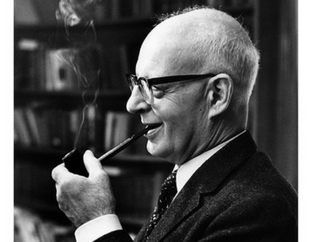 On April 30, 2018, New York Times carried a very admiring article by Robert E. Rubin about Raphael Demos and the importance of Philosophy, which I thought you might like to read.

For those who have not known Raphael or his involvement with CYA, let me say that he and his wife Jean were very supportive in many ways of Ismene Phylactopoulou’s initiative to start CYA. Raphael Demos was legendary at Harvard (among his students was Martin Luther King).

When he retired he taught as a visiting professor at McGill and Vanderbilt. He and Jean eventually settled in Athens and CYA had the benefit to have Raphael act as Academic Director and teach a philosophy class. He died in 1968, symbolically in mid-ocean, on one of their trips back to the US.

At a memorial service held on September 18, 1968 Professor Roderick Firth said about Raphael Demos, “Raphael’s effectiveness as a teacher had its roots in the source of all good teaching. He cared – he really cared – about reaching his students, not so much to win them to some particular point of view, for he was able to discuss Plato and William James with equal enthusiasm, but rather to open their eyes to the delights that he himself found in the study of philosophy. There is no substitute for this kind of motivation”.

Link to the Article: Robert E. Rubin: Philosophy Prepared Me for a Career in Finance and Government