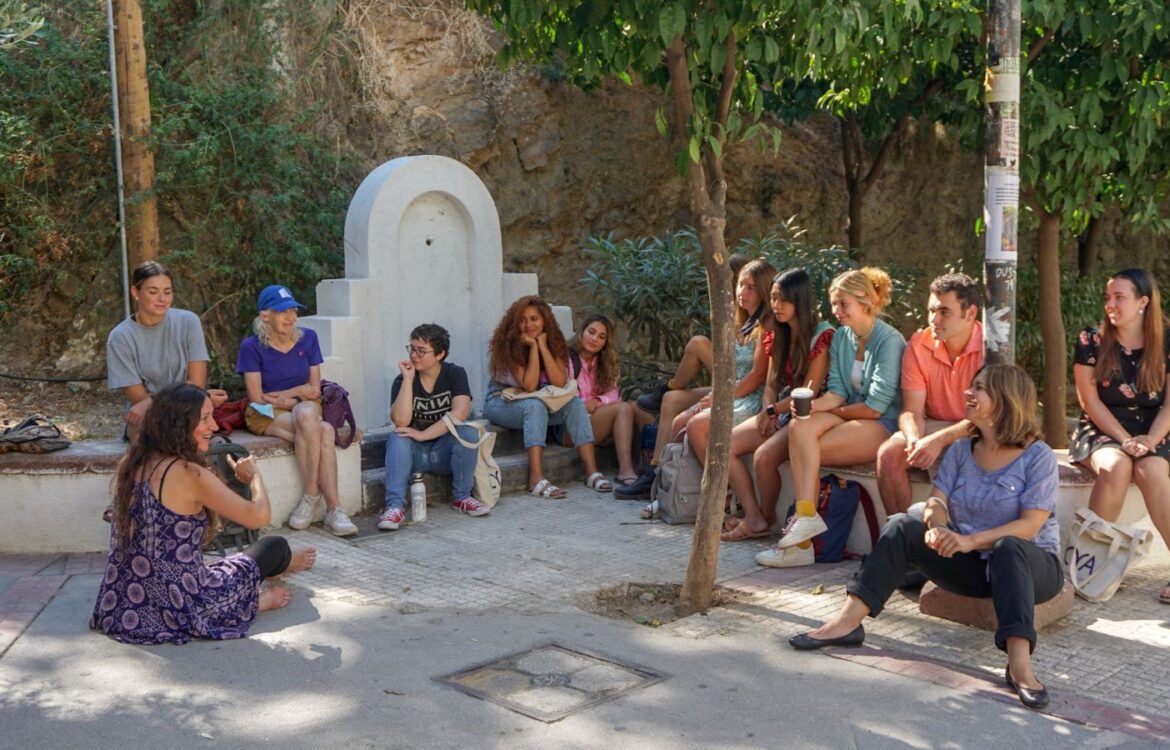 “Athens Became our Stage” – Exploring the City through Theater and Performance.

When I was looking at classes to register for before coming to Athens, I was trying to think a little more about my intentions this semester. I really wanted to try things out and take classes that would, first, be different from what I had taken before at my home institution, and second, would allow me to learn, hands-on, about Athens and its culture. I have always held performing arts close to my heart. Coming from a very artistic background, it was heartbreaking to figure out at an early age that I would never be a musical genius like my father, but it was amazing to find my place on the stage through other mediums. Theater, then, became my secret best friend that I would confide in when I needed an escape. I never pursued theater academically beyond an introductory course. Taking a class about something I love and am so intrigued by sounded idyllic, especially in this city that I was certain I would grow to love and was extremely curious about.

From the first day I walked into the classroom for “Performing (in) Athens: Exploring the City through Theatre and Performance”, I knew I would be getting the experience I needed from the class. Professor Athena Stourna’s cheerful disposition and creative spirit were aligned perfectly with the content of the class, and I knew she would encourage us to think outside the box. Athena Stourna is scenographer, theater maker, and researcher whose practice spans across multiple themes.  As artistic director of the multinational Olympus Theater Company, she has created many national and international productions. With her guidance, Athens became our stage. From street performances to video assignments, during this semester we have used our voices and our bodies to learn about this city and I’ve loved it.

Learning outside of the classroom has been a priority since day one. On the very first day of class, we explored our neighborhood and adjacent areas and were encouraged to take it all in, imagine ourselves as part of the city because we now were. During the earlier months of this semester, we had most of our classes outside, and because of this, we were able to take sunny Athens in for as long as we could. But one of the most amazing things about this class was how many opportunities we had to actually enjoy the vibrant Athens theater scene. From ancient theater plays on ancient stages to performances about contemporary topics on urban and refurbished industrial spaces, we have been lucky enough to see it all.

We were extremely happy to watch live performances and explore Athens through its rich cultural life. Our class watched an array of shows in different types of venues around town: Paisajes para no colorear, a documentary play, in which nine adolescent girls from Chile spoke out about the violence against women, at the Peiraios 260 Theatre, the Ancient Greek tragedy Orestes by Euripides at the Roman open-air Herodion Theatre, the concert Axion Esti at the Greek National Opera and the dance-theatre performance Van Gogh – Chalepas, at the old Hotel Bageion, at Omonoia Square. We also had the chance to meet, walk and talk with performance artists Mariana Kútulas-Vrsalović, Alexandros Mistriotis, and Alexandros Vamvoukos, who shared their experience of living and working in the arts sector in Greece.

One of the most memorable was “Orestes”, at one of the last showings of the Odeon of Herodes Atticus before it closed for the season. Being there felt magical, first because of the imponent nature of the space. I could not really wrap my head around the reality of where I was. I mean, there I was, sitting in a theater initially built approximately 1,860 years ago, watching a play written approximately 2000 years ago. Even writing these words down gives me chills, how certain pieces and spaces change and transform but are successful in surviving the test of time. I remember thinking, sitting there trying to make out the words of this play (which was in Greek), that this was the closest we had been to immortality. I also recall getting home and being impressed by how much this performance transcended cultures and language barriers thanks to the beauty of the space and the versatility of movements from the actors.

This class has been culturally enriching, has pushed me to think creatively, has shown me Athens from all its corners, has introduced me to incredibly artistic minds, and last, but definitely not least, has been so much fun!