“The light in Greece is different. I don’t know why, but it is. It penetrates past the skin and straight to the soul.”

The marble tiles feel slick beneath my feet, their rounded surfaces rubbed raw and shiny, like molting tourists who don’t appreciate the audacity of the Greek sun until after they shed their first skin.

The heat threatens sweat stains between my bag and my body, forcing me into the shade. I weave between vendors, passing pop-up grills laden with street corn and tables sporting mounds of cashews and dried apricots, each with their own scoop poised at the top, shining with perspiration like a hiker summiting Mt. Olympus.

As I near the entrance gate, a man with rosy cheeks caught my eye. The sun glints off his bald head. I wonder if he applies sunscreen there as well.

“Συγγνώμη,” I apologize. I only speak a little Greek.

“Cherries.” He says, gesturing behind him at a table piled high with round, scarlet jewels. “Cherries are in season, and they taste like the sun.”

Greece tastes like the sun. All year round, street side citrus trees boast their bright-orange bounty and the λαικι farmer’s markets display deep purple eggplants and overflowing sacks of dates. Photosynthesis is different here, as though the fruits absorb more than just energy to make their sugars, but also somehow harness the feeling of stepping from a chilly air-conditioned room into a bath of balcony sunlight, the kind of warmth that instantly reaches your insides.

I tasted it first on the island of Aegina. When the ferries opened up after COVID-19 lockdown ended, a few friends and I visited for the day. While we walked along the port hunting for lunch, a fisherman with leathery hands climbed out of his boat and beckoned me over to Taverna Kavourina.

He waved away the flies and pulled me closer to an octopus hanging on a line. She was draped there with all the vigor of the sun-soaked cats lounging lazily on every banister.

Just like the octopus, the street vendor’s cherries cannot be described as anything less than perfect. They glint from every angle, skin taut with their own juices, water balloons blown up so much they might burst under the weight of my gaze. I can’t resist. I buy half a kilo and shove them into my bag, their blood-red sweetness threatening a crimson stain.

“Ευχαριστώ πολύ!” I thank him and turn back towards Philopappou, the climb a bit more daunting now with the added weight.

From the walking street below, I can easily see my destination, just opposite Athena’s Parthenon and sporting a two-story memorial of Prince Gaius Philopappos. Philopappou Hill stands tall next to her sisters: the Hill of the Muses, the Hill of the Nymphs, and Pnyx, a popular lookout for dogs (and their owners).  Not one empty of ruins, each is a sunset sanctuary with its own rich mythological history. From the Parthenon to the Temple of Sounion, dedications dot peaks all over Greece, built to be close to the Gods, close to the sun. According to Greek mythology, Helios, the god of the sun, rides a chariot across the sky from East to West every day, and spends his nights in a giant cup, crossing the sea to repeat his journey. Ancient Greeks on the island of Rhodes honored him with a statue known as The Colossus of Rhodes. In its prime, when the monument was named one of the seven wonders of the ancient world, it stood 108 feet tall, approximately the height of the Statue of Liberty.

The first time I saw the sunrise from Philopappou was a jet-lag-spurred adventure. I was jogging around the empty cobblestone streets in the half-light of dawn, and I made it to the top just in time to see a blaze of red behind the Parthenon, crowning Athena in a fiery halo. In Athens, the sun rises from every corner of the horizon, flooding the landscape rather than pulling itself up and standing like a lighthouse. That morning, Helios and I woke up together. I promised I would be back often, and he climbed further up the horizon while I started my descent back home.

Cherries in tow, I start up the hill again. I creep around the sleepy dogs and wave at Nikos in the security booth. Despite the cooler air, my breath falls heavier against my flimsy blue mask. The crowds thin as I near the turn-off to the summit path. A group of tourists sit in the shade and fan themselves with brochures from the Acropolis Museum. Their clothes hang loosely on their beet-red necks and shoulders, revealing still sandy bathing suits and streaks of aloe. I wince at the memory of my first burn in Greece. 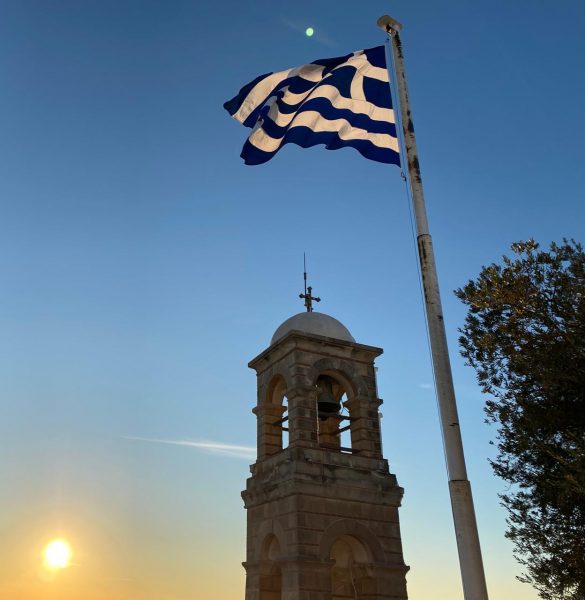 Though most Athenians do not swim until June or July, I left Athens in February for a polar plunge off the coast of Sounio. I’ll never know if it was the view of the Temple of Poseidon or the icy grip of the sea that took my breath away. Beach-goers huddled in parkas in the cliffside shade, while others sprawled out in bikinis, racing to be the first to a golden tan. Even in February, Helios is loyal to Greece, and I came home with the outline of my bikini branded onto my skin.

Now, June is here, and the weather in Athens has gone from a balmy spring to a sweltering summer, trapping us all in a concrete easy-bake oven. Now, I understand the allure of “siesta hours,” between 2 and 5 PM, an excuse to retreat from the streets when Helios is rounding the peak of his arc. Some brave tourists still summit the Acropolis after lunch, only to find it nearly empty. Perplexed, they make their descent from the Parthenon, noticing a bit too late the fiery red tops of their feet against the white marble stairs.

I pass the group of toasted travelers complaining about their peeling skin, and start my ascent to the sky. Twilight is my favorite time to walk, when the air cools, the sweat stains consider drying, and the city begins to stir again, everyone taking their evening volta. I pass a dozen runners, some alone, headphones in, others holding low, breathy conversations in pairs and groups. They all seem to move to the same rhythm, bonded in the rush of endorphins.

I nod in their direction. Me too.

Known for the original marathon, Greece still fosters a vibrant running community. Every morning and evening, athletes dot the walking strips, parks, and the top track of the Kallimarmaro stadium, where I have established a semi-permanent residence. Due to COVID-19, we spent our first week in Athens quarantined in our university apartments. For seven days, I paced the hallway and did hundreds of jumping jacks in full view of our neighbors. Sometimes they smiled and cheered me on, other times scowling at my blatant misuse of the balcony. What I had not yet learned is that balconies are not recreational. The back balcony is reserved for hanging laundry and storing cleaning supplies, while the front balcony exhibits enormous, exotic plants and a cute table and chair, so that you can sit and sip your first Greek coffee of seven in the sleepy morning sunshine while scrutinizing the neighbors’ enormous, exotic plants.

On day eight, I decided to take my growing pile of sweaty t-shirts to the laundry room. My second mistake was asking for a drier coin.

“The sun kills the germs. Hang your clothes on the balcony and dry them the healthy way.” said Popi, our stand-in mother and laundry czar.

Fumbling with the intricate folds of the drying rack in front of my usual audience, I laid out my pajamas like a prison uniform, the sole attire of confinement. Everything was bone dry (and supposedly germ-free) in twenty minutes. The Greek sun had blasted my clothes with her heat, kissed them sweetly, and handed them to me, warm with the flavor of morning sunshine. 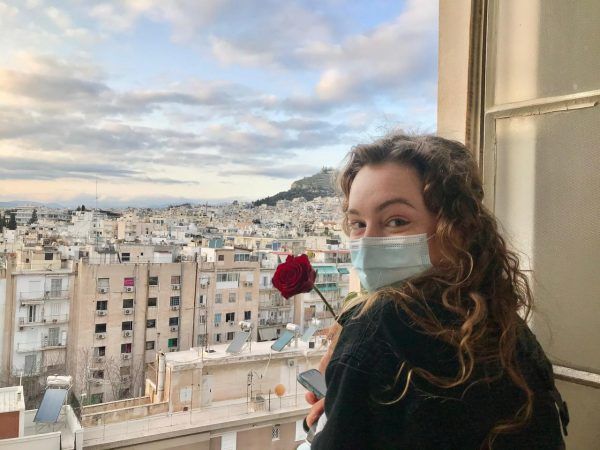 As my clothes begin to cling to me, I come to the first overlook of Philopappou and stop to catch my breath and take in the view of the Parthenon at twilight. Athena’s temple looks magnificent in the golden hour, off-white against a background of dimming blue, yellow, and gray. The din of visitors urge me on, and I keep climbing.

From the top of Philopappou, I can see the cream buildings blush pink with the anticipation of their collision with Helios. I marvel at the sea of solar panels below, the sun god providing for his favorite city. I stand, a lone sailor on an island, and the panels reflected his power back up at me, washing light around the mountain, waves lapping at the base of the hill and flowing towards the Port of Piraeus as though they can join the Aegean at high tide.

Looking forward to tasting my prize, growing increasingly heavy on my back, I find my spot against the monument and pull out the white paper bag, soggy with splotches as dark as ink from the burst balloons. As I lift one to my lips, I imagine Helios riding his chariot straight into my mouth.

I watch Helios ride lower and lower, slipping behind the horizon until the flaming red cherry fell out of the sky.

The clouds on fire, angry and flashing pink, orange, and yellow, until they tire of their own tantrum and fall asleep. The city begins to darken slowly, gently. The lights dim and the curtains draw closed.

I bite into the sun, and Helios climbs into his giant cup and begins his journey across the sea.