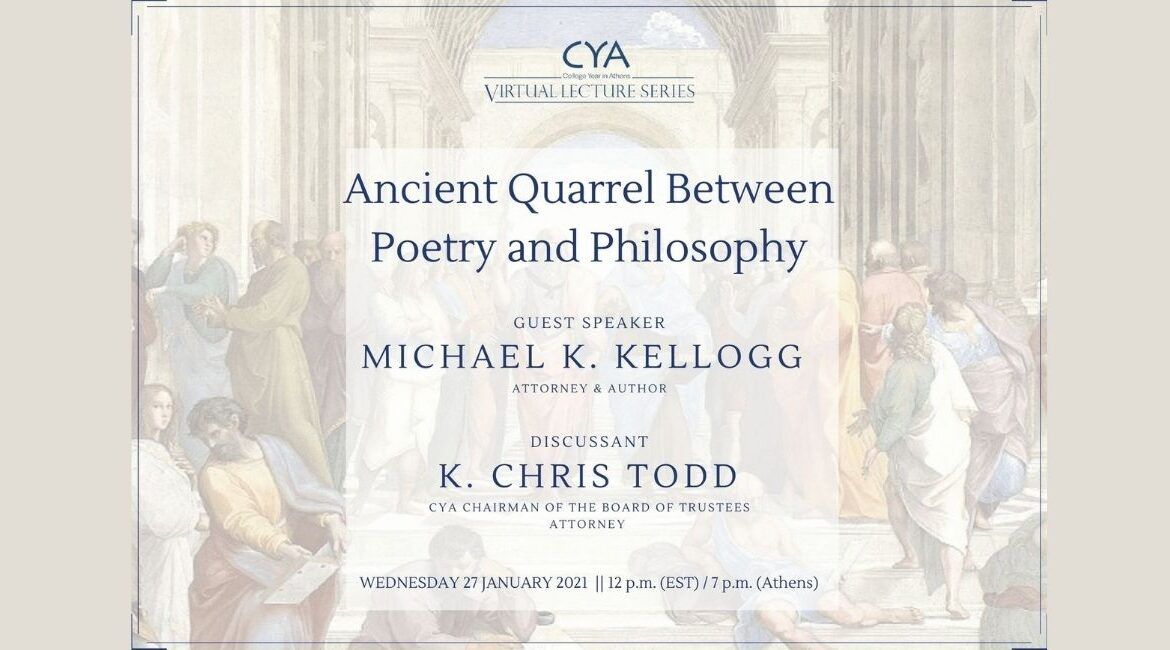 On January 27, 2021, Michael Kellogg, founding and managing partner of Kellogg, Hansen, Todd, Figel & Frederick, and eloquent author of books on philosophy and the history of western thought, participated in our Virtual Lecture Series, by discussing the much-debated critical battle of Philosophy and Poetry.

After CYA’s President, Alexis Phylactopoulos, welcomed guests and introduced the speaker, Chris Todd, CYA’s Chairman of the Board of Trustees, an attorney-at-law and a good friend of Michael Kellogg, opened the discussion by providing fascinating background stories on the speaker, and setting the lecture’s theme.

Kellogg began his lecture by asking, which was more important to the City State, Philosophy or Poetry?  “We know where Plato came out because he would have banned most poets from his ideal Republic.“  He went on to explain that the term ‘philosophy’ is a cognate of the Greek words philia (love or friendship) and sophia (wisdom). But “just because philosophers purport to love wisdom doesn’t mean they have a special claim to it.”

“What is wisdom?” Kellogg asks. “How do you get it, and even, is it worth it?” Looking at our societies, it seems that having a job and earning money is altogether considered more important than the search for wisdom. “Wisdom is amorphous, if not altogether elusive, and its practical benefits are unclear.” Here, Kellogg notes the importance of ancient Greek societies. “It’s not too much to say that we owe to the Greeks, our sense of our own humanity. And if they weren’t wise, there is no wisdom to be found…Wisdom is indifferent to genre,” he adds.

Kellogg goes on to introduce the important concept of Agon, which means contest or struggle. “The Greeks carried this concept over from warfare and sports, into their concept of the arts and their concept of wisdom.” In this lecture, the speaker focused on “the Agon that crosses genres. The Agon between Philosophy and Poetry as presented in the works of Plato and Aristophanes.”

Aristophanes contends that it is the poet’s job to safeguard the soul of the city-state and lead men to wisdom and the good life. He dismisses philosophy as, at best, “never-ending futile chatter/in a niggling senseless game.” He condemns philosophy even as practiced by Socrates and Plato because their focus on what is true everywhere and for all people makes them indifferent to the local and temporal concerns of the city-state. By contrast, poetry tethers us to — even as it transforms our understanding of — the present and makes us both wiser and better citizens.

Plato devotes his most beautiful, intricate, and poetic work – the Symposium – to refuting Aristophanes and yet, in the end, reveals his own ambivalence.

Michael K. Kellogg ended this Virtual lecture with his favorite anecdote of antiquity, namely that when Plato died, a work by Aristophanes was found by his bedside. “In order to achieve Wisdom, we need Poetry,” he concludes.