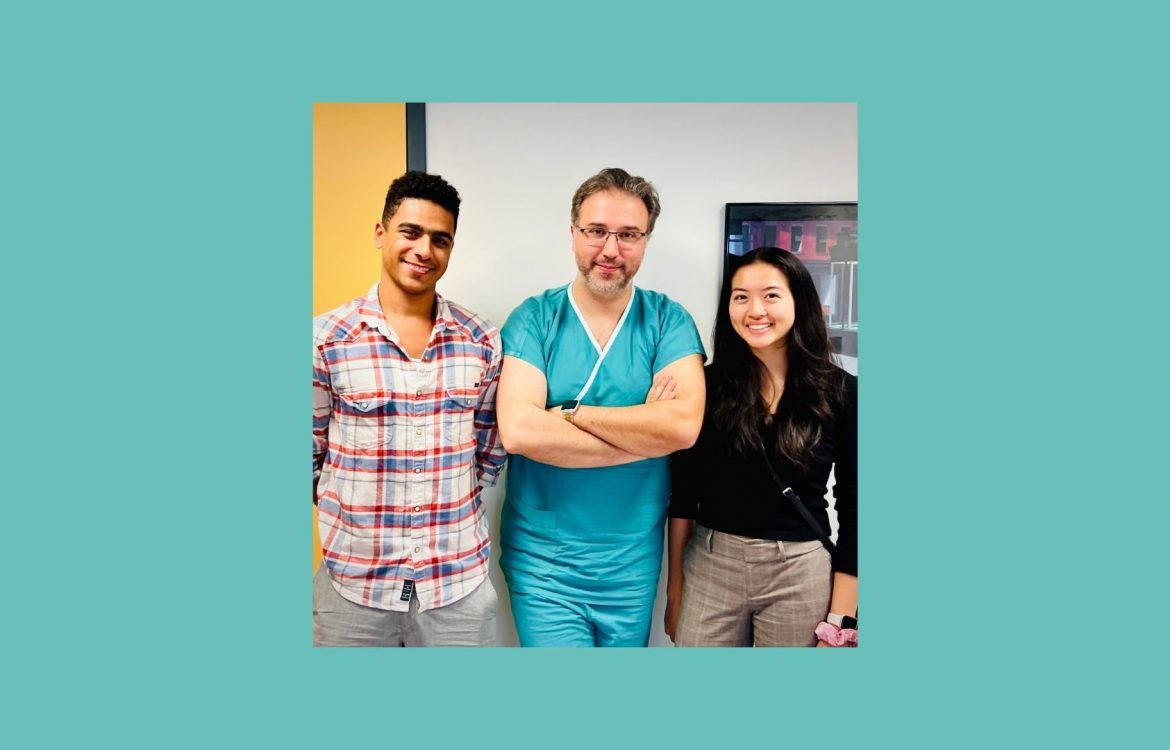 “I’ve learned so much about medicine.” Shadowing a General Surgeon While Studying Abroad in Greece.

Alice Cheng and Bassem Darwish are seniors at Union College, currently studying in Athens with CYA. Bassem studies Biochemistry and Psychology, and Alice Biology and Psychology. During the semester, they’ve been shadowing a Specialized General Surgeon, Dr. Spyridon Smparounis, getting close exposure to his work in a well-known Greek hospital. We spoke with Alice and Basssem about their life in Greece, their studies with CYA, and their experience shadowing Dr. Smparounis.

What has living in Athens been like for you?

B: It’s really great, the environment is just fantastic. It’s a lot of fun being able to explore the area, either walking or by public transportation, and even going to other Greek islands via ferries, it’s all very accessible. Each part is different to one another. It feeds my curiosity to learn more about Greece as a whole, and its culture.

A: Something that I really enjoyed is that Athens is a really big city, but at the same time it feels very homey. In the U.S. I live in a very suburban area. Here I enjoy the big-city aspects like being able to go out and explore whenever I want to. At the same time, it doesn’t feel like a really really big city, so it still makes me feel very at home. I really enjoy being able to go out to cafes and do my work there, it’s just a very different experience than what I would have at home. And like Bassem said, just the proximity to the Greek islands and being able to explore other countries in Europe, has been a really good part of the experience.  So being able to learn about ancient times, for example, ancient sports, at the sites where some of those would’ve been performed is a really amazing experience.

How did you decide to shadow Dr. Smparounis?

B: Medicine is just a really fascinating subject to me, I’ve always been really interested in it and I’ve shadowed different doctors in Europe and the U.S. beforehand. So when Angela approached me asking if I wanted to shadow Dr. Smparounis, I, of course, said yes. I’ve only had good experiences shadowing, it’s always fun to learn new things, especially in a subject I’m really passionate about. As a senior, I’ll be starting medical school next year and it’s just great to learn more and mentally prepare myself for what’s to come next year. It’s just been a really fitting extracurricular and I’ve learned so much about medicine. 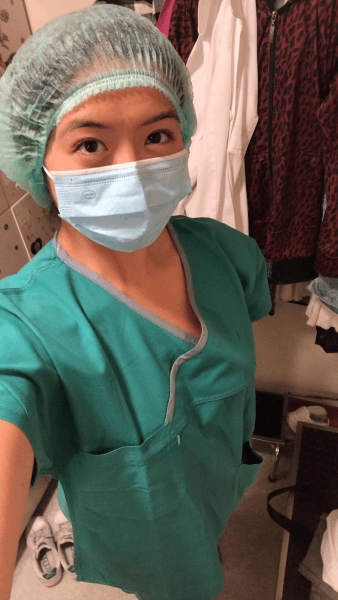 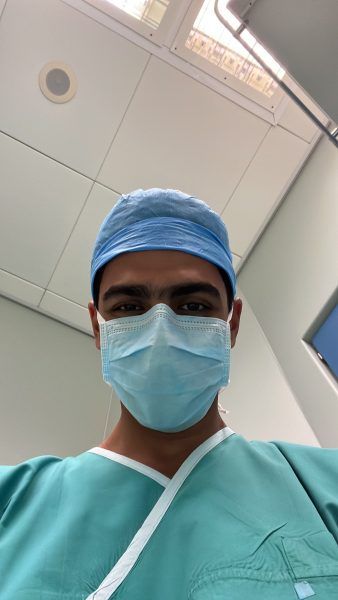 What did you take out of this experience?

A: For me, ever since I was really little, I’ve always known that I wanted to pursue medicine, but I just didn’t know what specialty, – if I wanted to go into surgery or maybe a nonsurgical specialty. So this was a really good opportunity for me to see firsthand what it’s like to be a surgeon, to get that exposure to the surgical field, and see for myself if that’s something that I can envision myself doing in the future. I’ve never actually been able to shadow a surgeon before, this is my first time, and it was a really valuable experience to see what it’s like inside an Operating Room because these are all experiences that I’ve still not been able to get in the U.S. It’s just been great to have it here in Greece.

B: It was such a cool experience because it had a sense of familiarity to it, but I also learned so much that it was still very interesting.

A: I really liked the actual medical aspects of it, being able to learn about different procedures. I got firsthand early exposure to the medical side of things in health care before I head off to medical school. During the semester I was able to observe an inguinal hernia repair, an ileostomy reversal, as well as a small bowel resection for a gastrointestinal tumor. These were all so fascinating to see firsthand, to be in there in the operating room and to watch the surgeons perform their work so meticulously. Even as an observer, it really left a lasting impact on me. It’s something that I’ll think back to in the future when I’m learning these things again because now I’ll have the background knowledge – somewhere in the back of my mind I’ll remember that I was able to see this when I was in Greece. We also learned about some of the surgical complications that can arise, such as sepsis, and this was also really important and valuable information to have as we go forwards in our careers.

Did the experience lead to any cultural observations?

B: Dr. Smparounis would talk about stigma in medicine, which is nothing uncommon; every single culture has stigma for certain medical procedures or medical illnesses. But it was interesting seeing how that differs from country to country and to see how, even though we’re raising awareness for certain illnesses, there’s still a certain taboo aspect to it. There are some that are taboo in the U.S. that aren’t in Greece, and there are some that are taboo in Greece that aren’t in the U.S. And so in that way that helped us sort of get a sneak peek into how some of the values differ between the U.S. and Greek cultures. 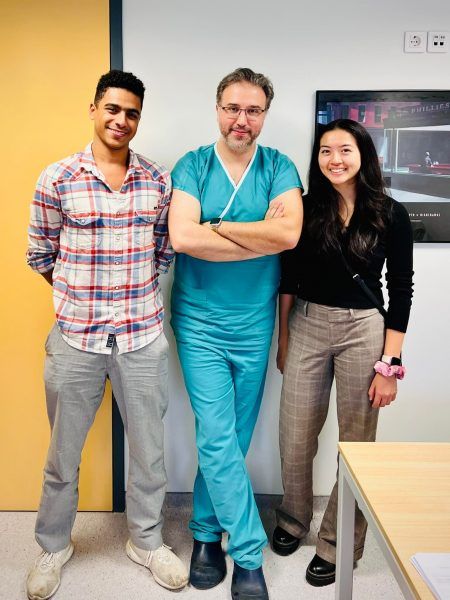 Do you have any advice for students thinking of shadowing Dr. Smparounis in the future?

A: I guess one thing that I realized during the process is that this is going to be very different from any shadowing experience you might get in the U.S. because the language barrier is quite limiting; Unless Dr. Smparounis directly translates things for you you probably are not going to understand everything that’s happening. I would advise students to go in with an open mind, know that they’ll learn a lot, but also know at the same time that it might not paint a very complete picture of what being a surgeon is like.

B: That’s a great way to put it, I do still think it’s a great experience however, especially when it comes to shadowing in medicine, which is not very easy to do in the U.S. It’s very hard to come by. It is very competitive to even get a volunteer spot, let alone an internship or anything more than that. So this opportunity is great. Yes, it may not be perfect, there are definitely language barriers and some flaws with it, but it’s still at the end of the day a great experience to have and it’s something that you can add to your resume, something that you can talk about, something that you will learn a lot from.

How was your experience studying in Greece with CYA?

A: I think it’s been a really, really good learning experience being abroad in Greece. CYA has really fostered a very welcoming and comfortable environment for all of us, I think I felt it the most with all of the Field Study Trips that we’ve gone on. I feel like the CYA staff and professors really really care about the students. They’ve done such a good job of planning all the trips so that we’re moving around very efficiently. They’re taking us to all these fantastic archaeological sites, as well as really fun places to be! For example, in our last field study to the Peloponnese, we were able to go to a honey farm, see this generationally passed-down honey farm business, do some honey tasting, and just experience the hospitality of the Greeks. That’s been such a big part of my experience here.

People often write in their study-abroad applications “I’d love to take my classroom outside of just the classroom building and use the whole city as my classroom” and I feel like that’s really happening here and the professors have really tried hard to make that happen. For example, in our culture class with Aimee Placas, we go on weekly walks around Athens with different themes. For example, one of our walks was about Tourism. [Another time,] we went on a foodscapes walk, to check out the different restaurants and how they connect with greek culture. Being able to have those guided walks around Athens has made it so much more enjoyable than just sitting down in a classroom and learning from PowerPoints. Being really immersed in the culture and becoming part of it ourselves, that’s been a really big part of the experience.

B: CYA does a really great job of making living in a new country digestible. It doesn’t just plop you in Greece and say ‘good luck!’, it really helps you to know the area well. Going back to our culture walks that we have with Aimee Placas, first you start off with getting to know Pangrati, and then we go off to Kolonaki and then Exarheia, and so we spread out more and more and we get to learn a lot. CYA did a great job of making the city less daunting, making it feel like home to us by now.

When walking around in Greece, it’s just fantastic being able to see modern buildings and then to the left you have the Acropolis, thousands of years old. I feel like that sort of harmony between the new and the old is similar to what we experience here. We come here and everything’s brand new, the language is new, but now, after some time has passed, The New doesn’t seem so scary anymore – it’s actually quite welcome. By now we don’t need to Google Maps ourselves around everywhere in Athens, and we can get around with the Greek that we have. Just two weeks ago or so, we met this little old lady – she only spoke Greek – and we actually had a pretty long conversation with her and it was a great experience. [Earlier in the semester] we would have been too shy but now, even though we know we don’t speak Greek that well, we’re still willing to try and venture into that uncharted waters. I think we really owe that to CYA for fostering that really comfortable environment that we have here in Greece.