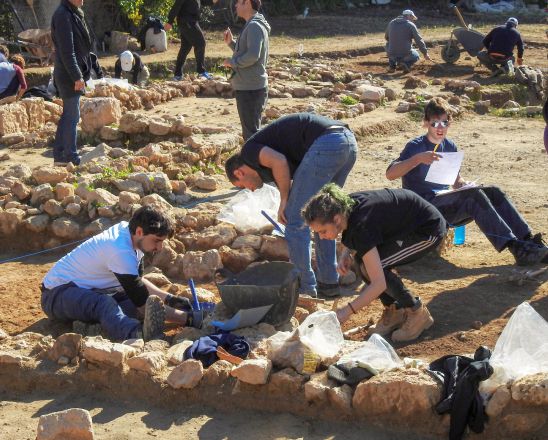 Students who have a serious interest in archaeology are invited to come to Athens for three weeks in January to participate in the excavation of a site associated with Aixonidai Halai, one of the ancient municipalities on the coast of ancient Attica. This will be offered as a short, INTENSIVE course with a total of 22 classroom contact hours, 12 hours of lab-work and teaching plus 45 hours of supervised participation on-site. The next excavation is scheduled for January 9 – 27, 2023.

The excavation will be directed by archaeologist Eftychia Lygouri and her colleagues Maria Giamalidi and Anna Maria Anagnostopoulou of the Piraeus Ephorate of Prehistoric and Classical Antiquities. The course lectures will be conducted by Dr. Karavas, a CYA professor and the Director of excavations at the sites of Halmyris and Gratiana (Hellenistic/Roman/Byzantine military and civilian sites). He is also the Co-director of excavations at Drajna de Sus (an early Roman site/legionary fort).

The importance of Aixonidai Halai, derived from its proximity to the city of Aixone (modern day Glyfada) and the valuable salt flats that existed along the coast. The site is located in the modern town of Voula, a coastal suburb some 20 kilometers from the center of Athens, known for its splendid sea-views and low pine hills. The site, near the church of “Aghios Nikolaos Pallon,” is in close proximity to the sea and close to the recently discovered Agora. Excavated for the first time in January 2008 by CYA students under the direction of the Greek Archeological Service, it contains ruins of large ancient blocks, suggesting the presence of a large and significant public building. Excavations to date have unearthed material from the Byzantine, Roman, Hellenistic and Classical periods, including a sarcophagus, three Roman kilns and a marble lion of as yet unknown date or purpose.

The excavation site is located in the modern town of Voula, a coastal suburb of Athens. It contains ruins of large ancient blocks, suggesting the presence of a significant public building. Excavations to date have unearthed material from the Byzantine, Roman and Classical periods, including three Roman kilns and a marble lion.

Please keep in mind that excavation work is physically demanding and requires a total commitment of time and energy.  Students will be expected to devote ten full days to the excavation, and to attend lectures on the history of the ancient municipality of Aixonidai Halai, on what has been learned from previous excavations, and on fieldwork methodology. They will also devote four days on lab-work, dealing primarily with the study and interpretation of the material cultural through artifact processing and cataloging as well as artifact restoration and preservation.

In order to take part in the Voula Field School program, students should plan to arrive in Athens by 3:00pm on Monday, January 9. An Orientation session is scheduled for 6:00 p.m. that evening.
Excavation and classes begin on Tuesday, January 10.  On that day, students will meet in front of the CYA Academic Center at 7:00 a.m. to meet your professor and transfer by minibus to Voula (a 30 minute ride).
Field work will start at 8:00 a.m. and end at 2:00 p.m., with a brief break at around 11:00 a.m.  The Voula project will keep to the same excavation schedule each weekday, Tuesday, January 10 to Friday, January 20.  Some weekend days may also be used to make up for lost excavation days due to bad weather.  Each day you are at the excavation, you are advised to have with you a bottle of water and a substantial snack.  There will be ten classroom meetings during the first two weeks of the program in the late afternoon, 4:00 to 6:00 p.m. at the Academic Center.  The third week will be devoted to lab work and workshops. Weekends will be free in general, unless a weekend day is utilized to make up for lost excavation days due to bad weather.

Final exams will take place on Friday, January 27.
Apartments will be available until Saturday noon, January 28.

The Ancient Agora and related sites