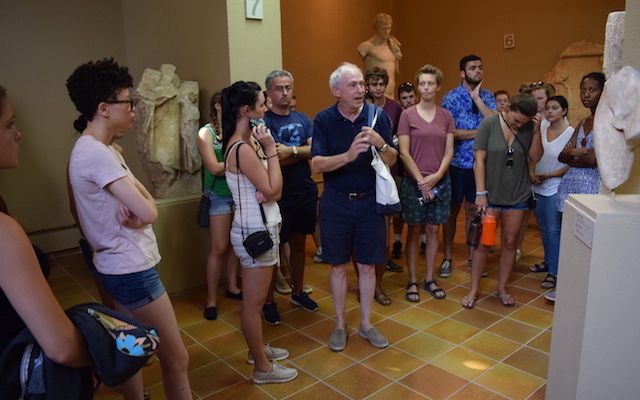 A CYA Alumnus returns to teach

This semester has allowed me to come back to CYA, where it all started, and share some of my love of Greek vases with a new generation of students who might one day follow a path like mine.

This Fall, I am teaching a course called “Greek Vase-Painting: Gods, Heroes and Monsters” with a team of enthusiastic students, most of them Classics majors from first-rate schools.

It is hard for me to believe that forty-eight years ago, as a student at CYA (’69), I took a similar course taught by Tessa Dinsmoor. One of the original faculty of CYA, Tessa was a young Greek archaeologist educated at UCLA, wife of the architect Bill Dinsmoor (who later taught for CYA), and daughter-in-law of the most distinguished scholar of Greek architecture of the 20th century, William Bell Dinsmoor.

Tessa was a very tough and rigorous teacher who force-marched us through the history of Greek vases, chastised us for not being able to read German scholarship, and made us commit to memory hundreds of slides.

One student, who was a talented artist, made a large caricature of Tessa as a Gorgon who glowered from the wall of an apartment housing seven girls on Xenokratous Street. But it was this class that set me on the path that would define my scholarly career, including studies of the iconography of Greek vases that would fill several books, dozens of articles, and three exhibition catalogues.

Tessa is retired and doing well, living in the Washington D.C. area near her son Paul, who was born during the semester I was in her course (without her missing a class).

My career has taken me to many parts of the world for periods of teaching and research: Germany, New Zealand, China, South Africa, and various American universities, most recently Johns Hopkins, where I retired from the Classics Department in 2015.

This semester has allowed me to come back to CYA, where it all started, and share some of my love of Greek vases with a new generation of students who might one day follow a path like mine.

* Alan Shapiro (CYA ’69) is Professor of Classics and W. H. Collins Vickers Professor of Archaeology Emeritus at Johns Hopkins. He has a BA (Greek) from Swarthmore College, MA (Greek) from UC Berkeley, and PhD (Classical Archaeology) from Princeton. He is the author of books and exhibition catalogues on Greek vases and sculpture, Greek mythology and religion, and women and gender, including Myth into Art: Poet and Painter in Classical Greece (1994) and Worshipping Women: Ritual and Reality in Classical Greece (Onassis Cultural Center, New York, 2008).