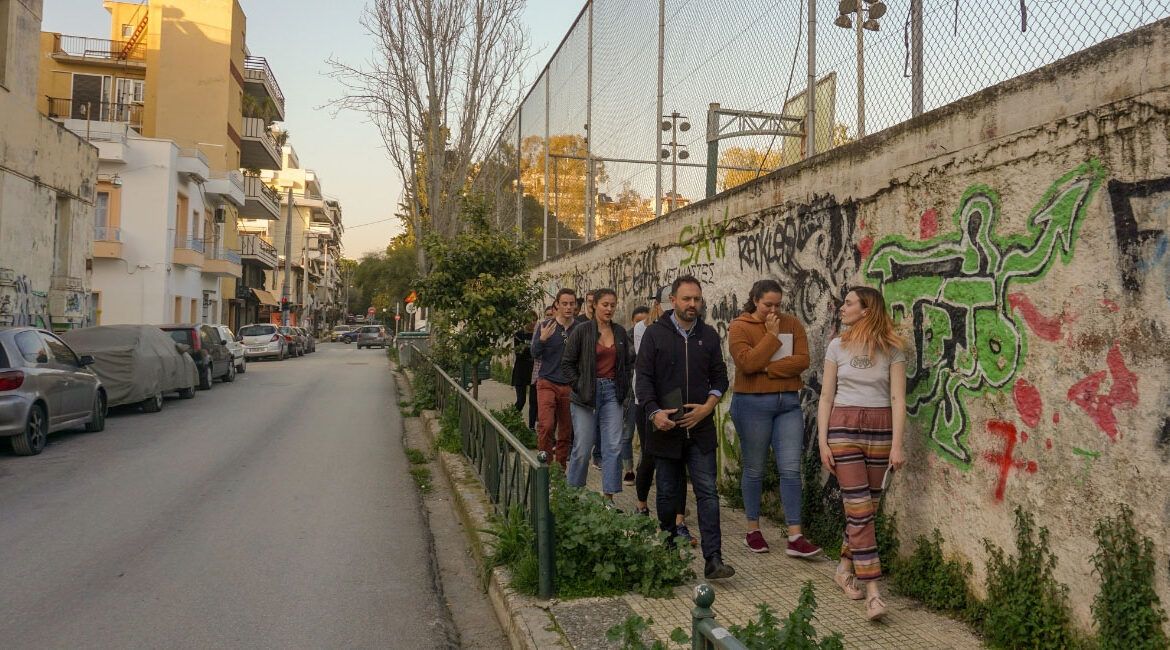 Is Greece a unique case in modern history? The CYA course ‘Modern Greece: From Revolutionary Visions to the European Crisis’ explores this question. Using Athens as a textbook, students participate in field trips to experience what history looks like in the everyday life of contemporary Greek citizens.

On a warm Wednesday afternoon, we joined the class on their field trip to Kaisariani neighborhood. We met our bus driver, Nikos, in front of the Kallimarmaro stadium. He expected us to be heading to the Monastery of Kaisariani, the only famous sight in the area. However, CYA history professor Kostis Karpozilos prefers ‘the road less traveled’ and his class was headed to the back alleys of Kaisariani and its lesser-known historical sights.

And so it was in residential Kaisariani that CYAers began their walking tour. Busy streets, beeping car horns, people going about their business; at first glance, Kaisariani seems just like any other Athenian neighborhood. But is it? Although the CYAers had arrived in Greece just a month before, they immediately started noticing differences from more familiar surroundings. Historical events are ever present in the urban structure of Kaisariani and one can immediately sense this on entering the neighborhood.

Walking through the municipal park, students found themselves at the National Resistance Memorial, erected on the spot where numerous Greek resistance fighters were executed by the Nazi occupying forces during the Second World War. The class discussed this dark period of modern Greek history, the realities of the occupied city and the politics of remembrance. 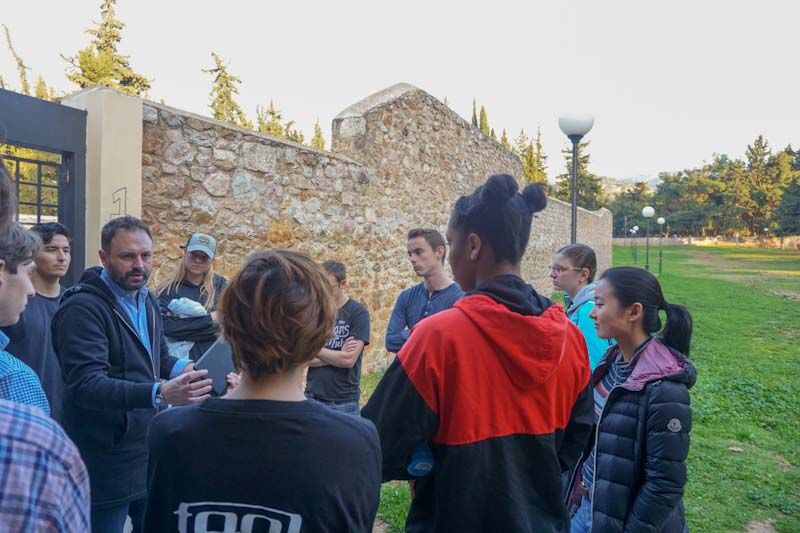 Next, students were surprised to find out that one of the oldest Greek basketball teams has an American name, Near East B.C., in honor of the Near East Foundation in New York, which helped Greek refugees in the 1920s and1930s. While watching the boys’ basketball team in training, students sat on the steps of the club for a critical discussion on the international humanitarian aid of the period. 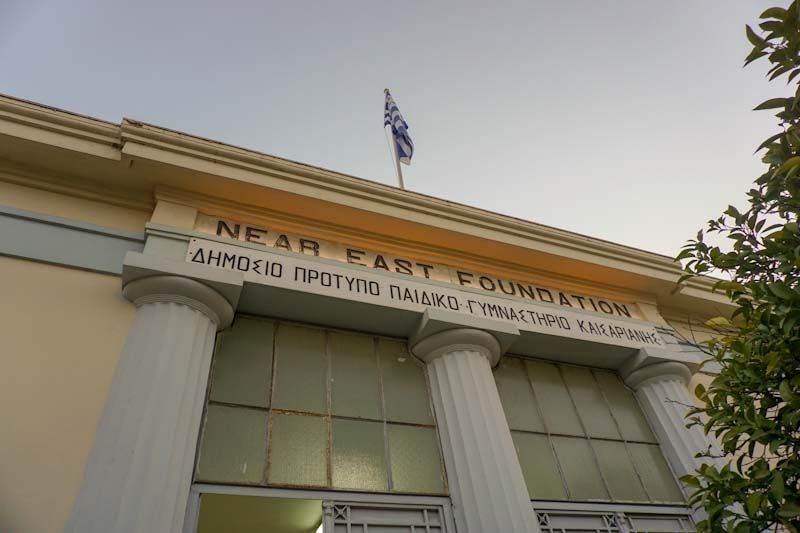 Finally, Professor Karpozilos led the class into the narrow alleys of the neighborhood and urged students to take in every aspect of their surroundings. Kaisariani was populated by refugees in the 1920’s, following the exchange of Greek and Turkish populations. The class was able to see the remaining structures from that era and to picture what everyday life must have been like back then. Indeed, students soon developed the ability to recognize the “prosfygika” houses, and they considered the implications of living in such overcrowded accommodation as well as reflecting on links to the current refugee crisis. 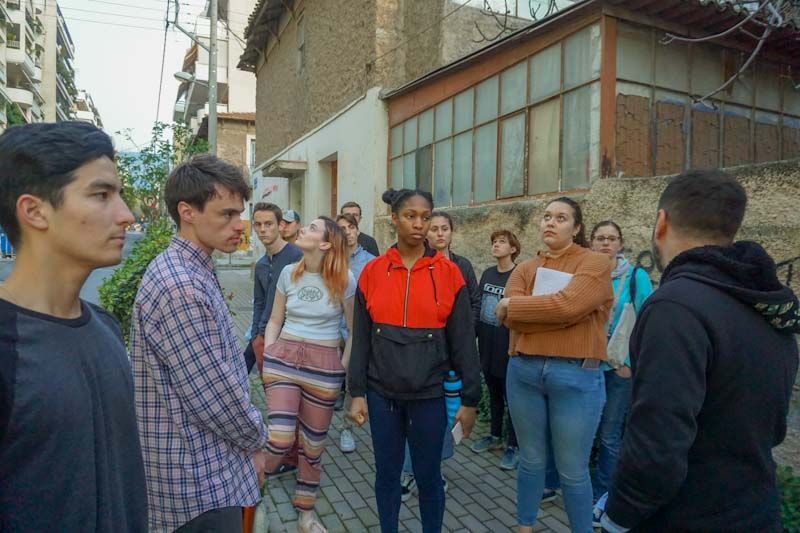 As we headed back to the bus, Kaisariani had one more historic revelation for us, this time from the 1940s: buildings riddled with actual, visible bullet holes from the Second World War. But the German Occupation and the ensuing Greek Civil War constitute the next thematic focus on this history course. 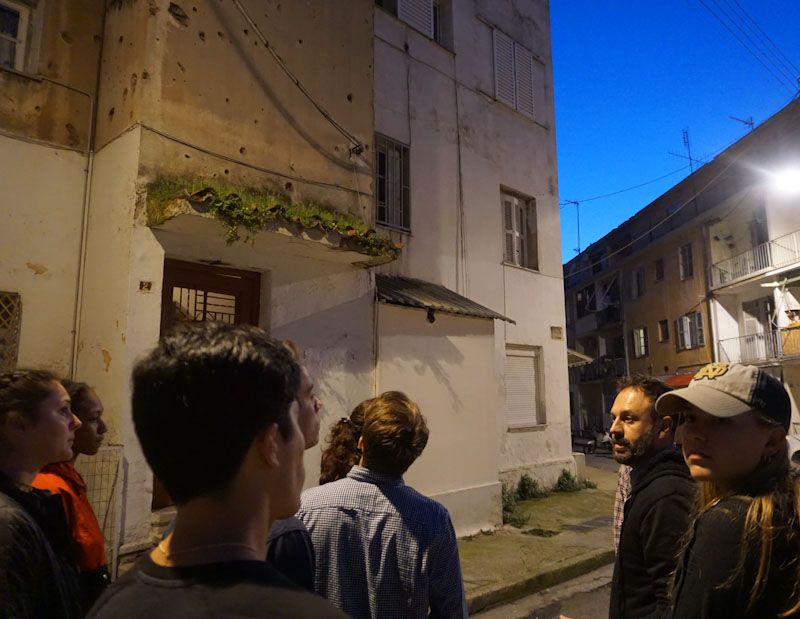 For the time being, CYAers were thrilled to have walked through modern Greek history and look forward to the next field trips: to Syntagma Square and the Polytechnic School in downtown Athens.