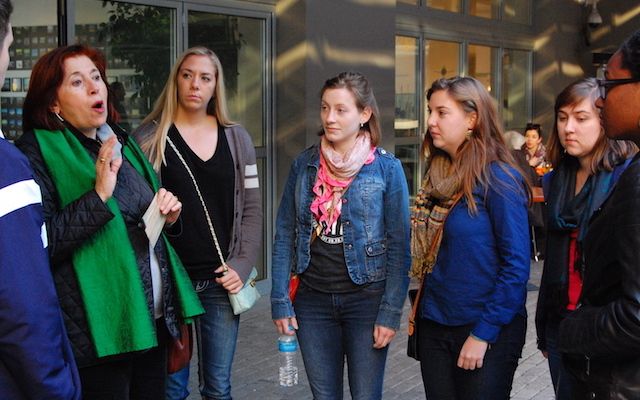 Teaching becomes a passion, especially concerning the Modern Greek Language. Why a passion though? Because learning Modern Greek at CYA contributes decisively to the identity of students, regardless of their background or ethnicity.

Teaching becomes a passion, especially concerning the Modern Greek Language. Why a passion though? Because learning Modern Greek at CYA contributes decisively to the identity of students, regardless of their background or ethnicity. Students start to learn more about their own language realizing suddenly that they already know so many Greek words (such as; idea, music, theatre, geometry, theory, just to name a few). Greek Culture instantly becomes part of their culture and the world their classroom.

Starting by explaining the Greek Alphabet, I proceed with teaching students how to read, write, and speak simultaneously. Thus, from the very first lesson, students know how to greet people and this eventually develops into communicating, creating new friendships, and a better understanding of the customs and the habits of Greek Society.

Life in this foreign country is slowly unveiled, since it is through learning the language that students are able to effectively penetrate into the mentality of the people of Greece.

In my classes, the process of learning Modern Greek is always complimented by History, Art, Music, Architecture, Etymology, Religion, Customs and Habits via some important and meaningful details. In this way, students learn the language by traveling through time, jumping from Prehistory to Modern Society, having passed through Classical, Hellénistique, Roman, Byzantine, Ottoman Occupation, Independence (the Greek Language has been continuously spoken without any interruption for 2500 years) landing in today’s world.

Student experience is thrilling to the extent that last year a group of my students went hiking on Mount Parnassos. They arrived at a village, which was at the foot of the mountain and asked a lady sitting at her porch for directions, addressing her naturally in Greek. She helped them out eagerly. On their way back, a few hours later, there she was waiting for them. She invited them all inside her house, where, to their huge surprise, some friends and relatives of hers had prepared various delicious Greek dishes and they spent the rest of the evening eating, drinking, laughing and …practicing their Greek.

We can easily see how immensely enriching it is to learn Modern Greek. It defines the study abroad experience in Greece. Mission accomplished: My passion became contagious.

* Eleni Karvouni graduated from the Sorbonne with a Maitrise in Art History specializing in Byzantine icons and architecture. She lived in Paris for five years and collaborated with Manos Hadjidakis, the composer and director of the Third Program of Greek Public Radio, translating from French into Greek the plays of Jean Genet and Eugene Ionesco for the Third Theatre (1975). She also translated from English into Greek various books on education for Kastaniotis Editions (1976). Writer Dinos Siotis published her poetry in A Contemporary Greek Poets Selection (1977). Her voice has been featured in audio cassettes used to supplement Greek textbooks. Since 1989, she has worked as a teacher at the Athens Centre, teaching the Greek language to non-native speakers. She has also organized Greek language classes for diplomats at the French Embassy in Athens. Ms. Karvouni speaks French, English, and Italian and loves to elaborate on the culture and history of Greece.