We are pleased to host the lecture by Thomas W. Gallant, Professor of Modern Greek History and Archaeology at the University of California, CYA Alumnus (’76) and member of our Board of Advisors : Murder on Black Mountain: Love and Death on a Nineteenth Century Greek Island  on Monday 13 March at 7:00 p.m.

The brutal murder of English Captain John Parker and his dog, Duffy, on the Greek island of Kefalonia in May 1849 created a cause célèbre in mid-nineteenth century Europe.  Using documents from archives in Greece and Great Britain, this lecture explores the contours of social life in nineteenth century Greece. Parker’s murder was never solved, despite vigorous police investigations, maybe we can solve the mystery?

Thomas W. Gallant holds the Nicholas Family Endowed Chair in Modern Greek History and is Professor of Modern Greek History and Archaeology in the History Department and the Center for Hellenic Studies at the University of California, San Diego. He received his PhD in Classical Archaeology from the University of Cambridge. He is the author of twelve books and over 40 articles; among his books are Modern Greece (2001), the prize-winning Experiencing Dominion: Culture, Identity and Power in the British Mediterranean (2002), and August Burning: The 1818 Anti-Greek Riot in Toronto (2008), which was made into an award-winning documentary film. His most recently published are: The Edinburgh History of the Greeks, 1768-1913: The Long Nineteenth Century (2015), Η εμπειρία της αποικιακής κυριαρχίας. Πολιτισμός, ταυτότητα και εξουσία στα Επτάνησα, 1817-1864 (2015), Modern Greece from Independence to the Present (2016), Σύγχρονη Ελλάδα (2017). In progress are: Murder on Black Mountain: Love and Death on a Nineteenth Century Greek Island (2017) and Europe’s First Modern War: The Greek-Ottoman War of 1897 (2018). He is currently editor-in-chief of the ten-volume Edinburgh History of the Greeks, Social Science editor of the Journal of Modern Greek Studies and director of KASHAP: the Kefalonia and Andros Social History and Archaeology Project. 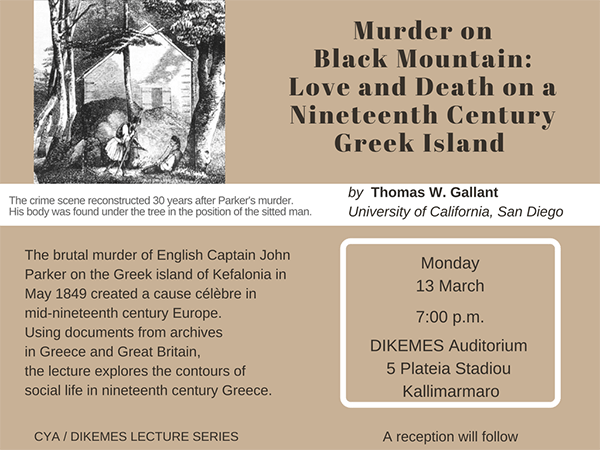