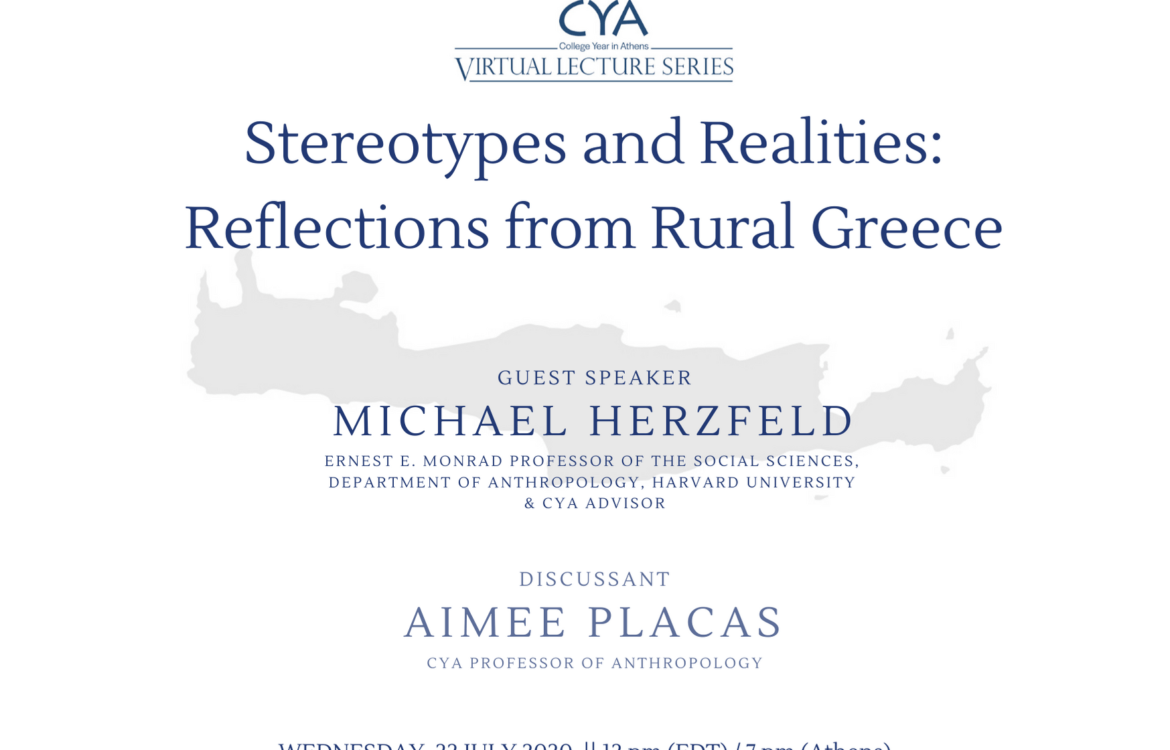 On Wednesday, July 22, CYA’s Virtual Lecture Series hosted former faculty and long term advisor, Michael Herzfeld,  the Ernest E. Monrad Research Professor of the Social Sciences in the Department of Anthropology at Harvard University for a presentation on “Stereotypes and Realities: Reflections from Rural Greece.”

Professor Herzfeld addressed the importance of knowing village life to understand Greek cultural attitudes even in the most sophisticated urban contexts today.

Having spent decades studying the Cretan village of Zoniana, Herzfeld, discussed themes commonly found Greek village life. Themes, such as philotimo, a notoriously difficult word to define, which has been said to mean ‘love of honor, respect, and virtue,” and philoxenia, or hospitality. While these virtues are typically associated with villages, even by urban Greeks, Herzfeld argued that concepts found in rural Greece are also present in urban centers, just in different forms.

The flyer for the event

The speaker also showed how his work in this rather extreme context of a mountain community could clarify some of the attitudes and strengths that are very much part of Greek cultural reactions to today’s crises, including solidarity in the face of austerity and external financial pressures, the fight against corruption and mismanagement, the COVID-19 pandemic, and more generally the erosion that commercialization and globalization have wrought in ordinary social relations.

Professor Herzfeld discussed Greece’s extremely efficient response to the COVID-19, and that many did not expect such a competent and decisive response by the country, noting Greece’s reputation for inefficiency. Herzfeld argued that despite this, there is a widespread ability to make last minute decisions, and that Greeks showed great self control, despite stereotypes of the country.

The discussion, which was monitored by Aimee Placas, professor of Anthropology, who teaches at CYA, was the last in this season of CYA’s Virtual Lecture Series, which will return in September.