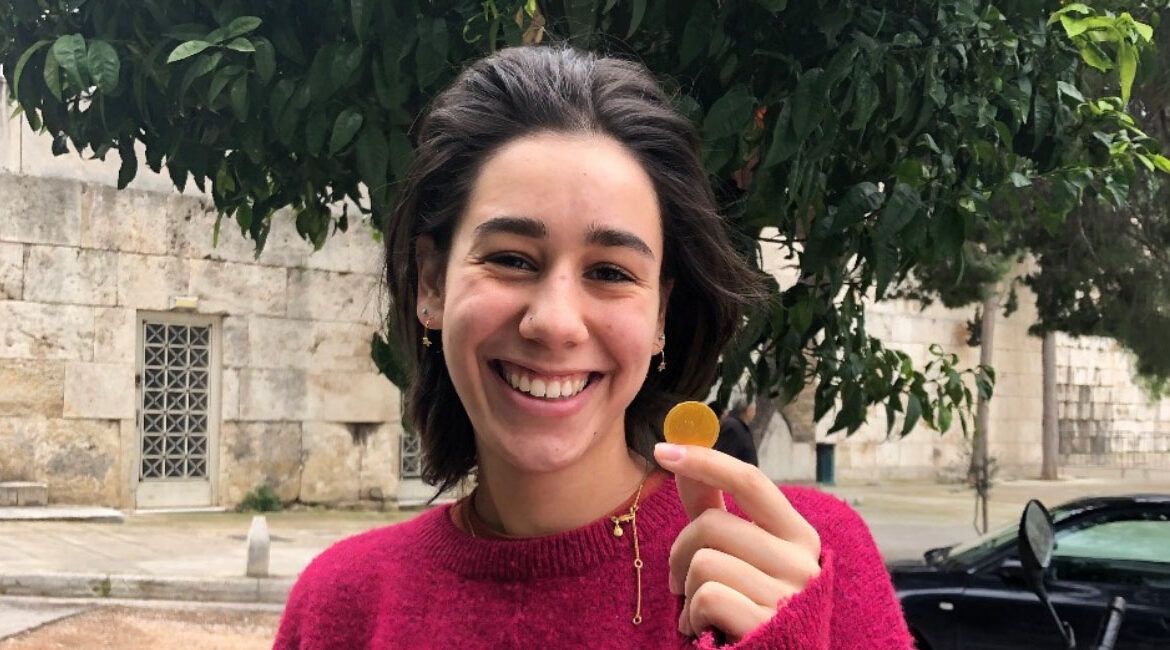 Whenever New Year rolls around, I’m always curious about what the year will hold. Many cultures have celebrations that center around this time of year and ways to predict what will happen. The tradition I am most familiar with centers around a small coin.

In Greek households, a vassilopita is served at New Year, usually right at midnight. The Vassilopita is baked and is something between a cake and a bread. It’s also named in part for St. Basil’s (Vassilis’) Day on January 1st. However, what is most important about the vassilopita cannot be determined from looking at its outside. Before baking, a coin is slipped into the dough. Its location is only revealed to the person who discovers it while eating their slice, and finding the coin means good luck for you in the upcoming year.

I’m Greek-American, so the vassilopita is a tradition I am well versed in. We have one every New Year with our Greek family friends. After we all watch the ball drop in Times Square on TV and get all our cheering and champagne and pictures out of the way, we crowd around the dining room table and see who will get the coin (in our case, a quarter) in their vassilopita slice. This year, we had twelve people at our celebration, meaning twelve slices needed to be cut. Then, we selected slices by putting a finger to the slice we wanted, starting the claiming process with the oldest (my pappou/grandfather) and finishing with the youngest (Thanos, one of our family friends). When all slices were claimed, we each took our piece and instantly started picking them apart to see who got the coin. 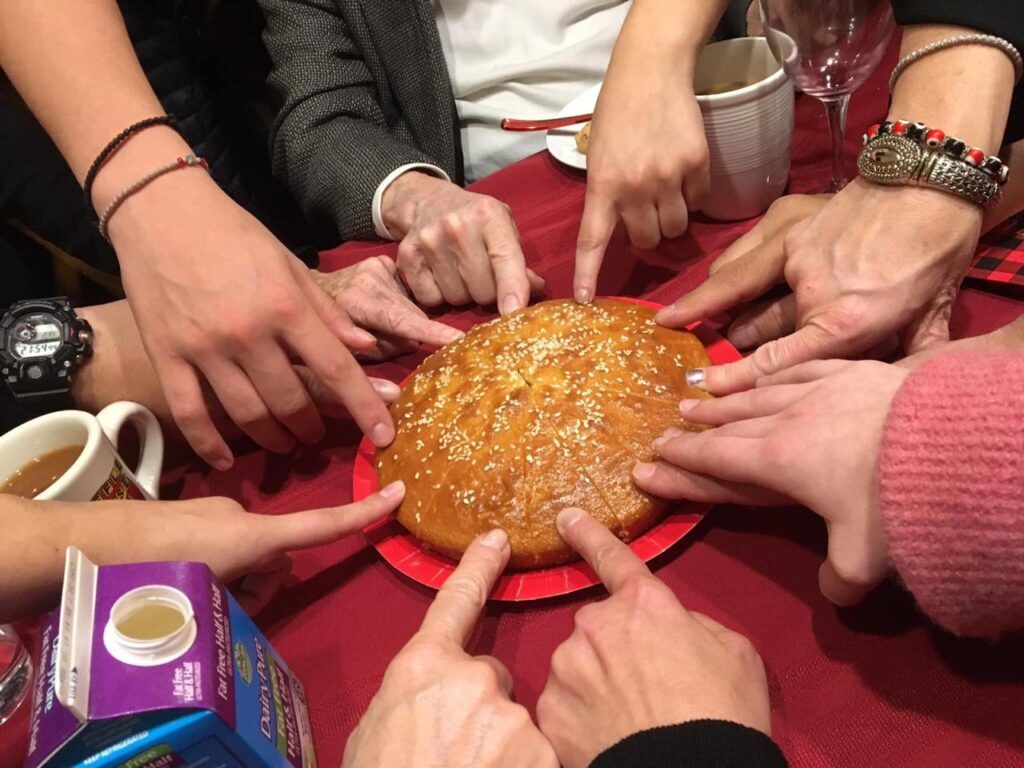 Choosing a slice of vassilopita!

As determined by the vassilopita, in 2019 my father will enjoy good luck and prosperity. Although he’s my father and he deserves all the good that comes to him, as always, I felt just a little bitter when I didn’t get the coin. I’m not very superstitious, but the vassilopita is something I always take seriously; which slice you pick is the first factor in determining what kind of year you are going to have! Yes, a small feeling of disappointment was inevitable, but I knew in about a month, I would be going to study abroad in Athens and there were sure to be good times there, whether the quarter was in my hands or not. 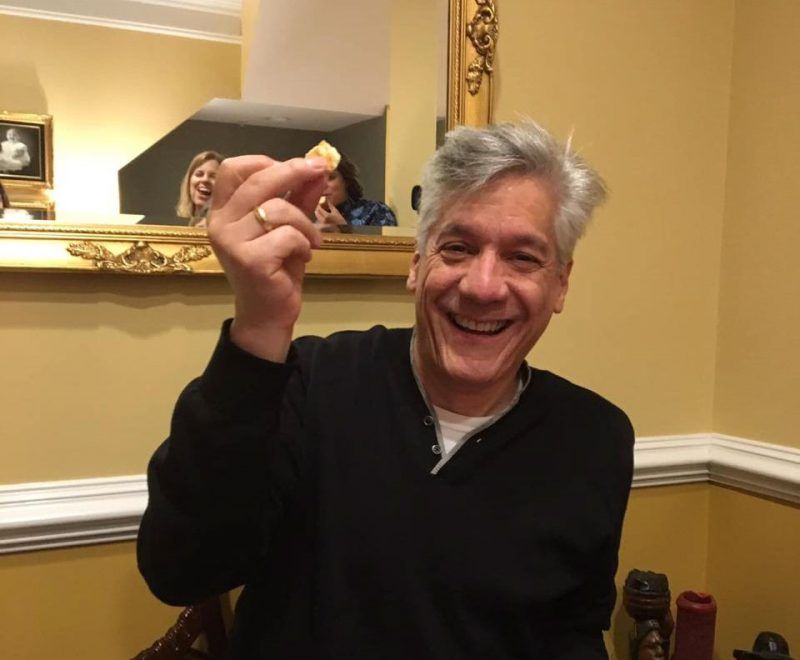 My father, Chris, and his lucky coin!

After arriving in Greece, my new classmates and I went on a weekend trip to Delphi as part of orientation, seeing the ruins and museum there, as well as learning about the area. When our first day in Delphi came to a close, all of the CYA students, faculty and staff gathered in the hotel for a huge welcome dinner, with a wonderful selection of Greek food. The president of CYA, Alexis Phylactopoulos, welcomed us with a speech and said that before dessert, they were going to cut slices of vassilopita for each of us, telling us about this Greek tradition.

There were three large vassilopitas, so everyone in the program could have a slice. They were given from oldest to youngest at each table, wrapped up so we could take them back to our rooms for later. Dinner was delicious and I definitely ate way too much, so I decided to eat it later. Besides, I wasn’t able to secure the luck of the coin out of twelve people, let alone out of a hundred, so the odds… were against me.

However… the odds were not totally against me. The next morning, I woke up much later than I needed to, and knew I wasn’t able to get ready quick enough for a proper hotel breakfast. The piece of vassilopita was on my bedside stand from the night before, so I unwrapped it and broke off the tip to eat as a quick snack. But right there in the middle, still half stuck in the bread, was a plastic gold coin. I had obtained good luck for the year to come.

It should be noted that choosing to come to a new country where I’m unfamiliar with the customs and language was a high hurdle to jump, and one I took to in order to challenge myself. Excitement about this experience didn’t mean that I wasn’t scared, and my nervousness led to a list of worries in my head of all the things that could go wrong. But seeing the small plastic coin in my vassilopita slice felt like a sign that everything was going to be okay for me this year. I kept it in my pocket for the rest of the trip, and it now resides by my keys, and I see it everyday when I leave my apartment to go experience Athens.

Yet, the power of the lucky coin did not stop me from spending way too much on groceries my first week, or miscommunicating with multiple people in a train station during a weekend trip to Thessaloniki. Life always provides challenges, and no amount of lucky coins can stop them from happening. What this coin did provide for me was a reminder that I will always make mistakes, (and may never learn how to cook without burning something), but at the end of the day, you can find luck and happiness in unexpected places, and when you least expect it. Keeping yourself open to possibilities like these is in part what going abroad and life is all about. So, my lucky coin and I are open to all of the adventures and memories that Athens and the future hold for us– here is to a great 2019!

As they say in Greek, ΧΡΟΝΙΑ ΠΟΛΛΑ!