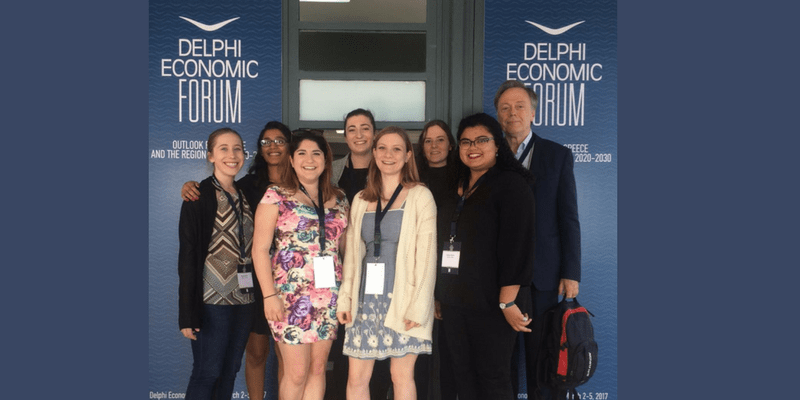 A few weeks ago, several CYA students had the opportunity to travel to Delphi and participate in the 2nd annual Delphi Economic Forum. This year’s theme was: Outlook for Greece and the Region vision 2020- 2030. According to their website this conference, “aims to identify the main global trends, assess their implications and review the resulting challenges and policy options confronting decision-makers of the wider Eastern Mediterranean Region. It will also focus on Greece’s need for structural reforms and new leadership strategies, which will result in a new model of governance.”

Hearing about the economic and refugee crisis in Greece coupled with living here for the past two months, one can immediately see the need for a discussion like this one. From speeches by foreign ambassadors to discussions about the Greek diaspora and the refugee crisis.

Perhaps the largest and most historical issue discussed at the DEF revolved around the Greek diaspora. This refers to the communities of Greeks living outside Greece. The country is currently attempting to convince some of these populations to return back home, especially young people. And what started out as a logical discussion arguing different ways to get young people interested in returning, turned into a deeper conversation about whoexactly is a Greek?

Nikos Mouyiaris, founder and CEO of MANA (a cosmetic company), explained that there is nothing bringing young people back to Greece because they’re not interested in traditional Greek culture. Today, only about 20% of people regularly attend Church in Greece. That’s a 30% drop from the traditional numbers.

Monica Stravous, a Greek-American student studying at CYA, said her family has never experienced Greece reaching out to them. “When I went to the consulate to get my student visa, the officer asked if I would like to be considered for citizenship. That was the first time my family has ever been asked that question. I think Greece should advertise better and reach out to more families if they want their people to return.” The current debate around Greek diaspora is the issue of voting. The New Democracy Party, the minority party of Greece takes the position that Greeks abroad should retain voting rights. A representative of the party expressed, “Greeks abroad need to remain Greeks.” If they don’t know the language, they won’t know the history or culture. From this perspective, it is vital that Greeks abroad form small communities conforming to Greek culture.

Side note: New Democracy is considered the nationalist party of Greece and the respective representative was the only panel guest who did not understand English. Perhaps this has something to do with his nationalist identity?

Countering this position, Mouyiaris argued that Greeks abroad should not be allowed to vote because it would divide those communities along party lines rather than unite them abroad.

At this point, the entire room broke into clapping.

If you look at the facts, only 200,000 out of 1.3 million Greek-Americans speak Greek, even less are currently aware of political affairs in the country.

What’s the solution? Perhaps, there isn’t one. But perhaps it entails lowering the bar of defining a Greek, according to an audience member. Citizenship is very difficult to receive and it’s inherent traditional culture creates defining boundaries not everyone can fit into. If Greece would open centers in major Greek diaspora centers and make it easier to become citizens, maybe we wouldn’t need to have this debate.

CYA students were a ble to experience this agenda setting firsthand and even ask a few questions. Allison Estey asked the question, “Is there a chance Greece could leave the EU?” Which sparked heavy debate and yelling in the most amusing Greek fashion. (It’s interesting to watch Greeks argue with each other because they will yell and scream and have a fit but it’s all intelligent conversation and doesn’t affect the relationship between either party).

Not only did students get the chance to participate with Greek officials and ambassadors, but they even had the opportunity to meet CYA alum Endy Zemenides, who is now the Executive Director of the Hellenic American Leadership Council.