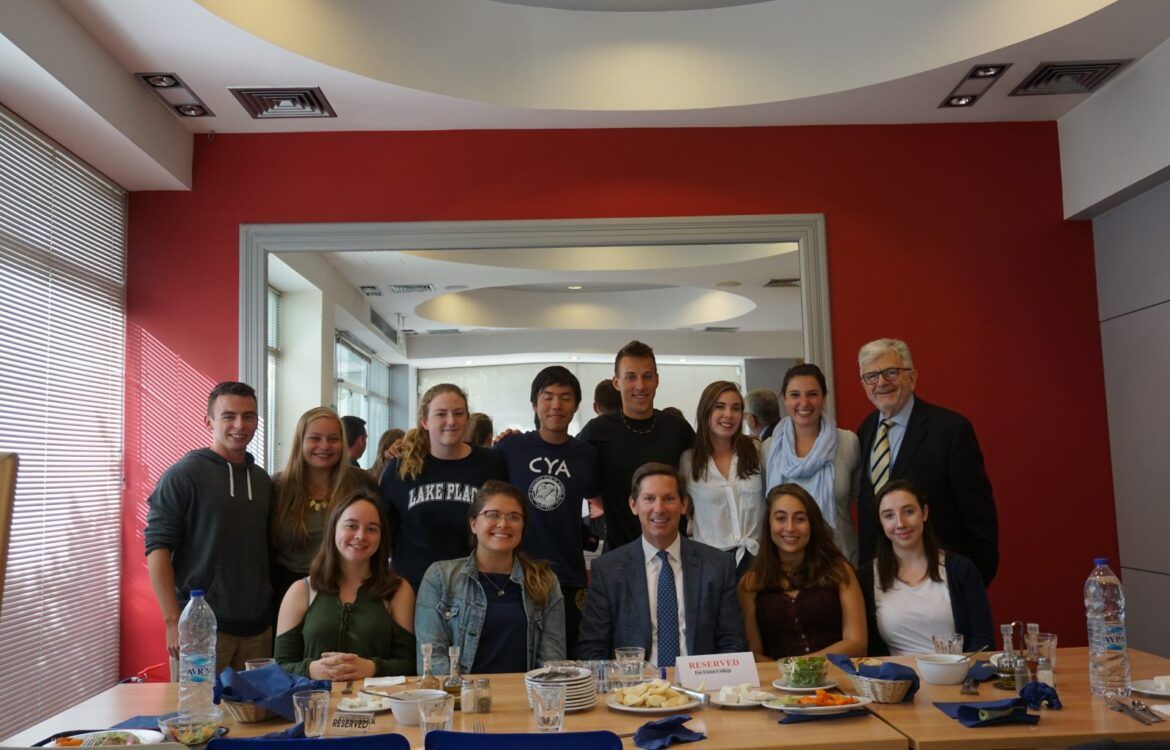 When Robert Leary came to Pangrati and stepped into the College Year in Athens building, it was a homecoming of sorts. A former student of the CYA Union College faculty-led program in 1982 while studying politics at Union College, he is now back in Athens for a different reason: as the new CEO of The Olayan Group, a global conglomerate of investment and operating companies based in Athens, London, New York and Riyadh.  It can be said that a lot has changed since 1982. Mr. Leary is now connected to CYA not as a student, but as a former trustee and alumnus, he has added a political science degree and a law degree to his name, and has broadened his scope past politics through working extensively in law and the financial sector. Funnily enough, Mr. Leary had not even planned on studying abroad despite his love for international affairs. However, in a twist of fate, his best friend at Union called him to tell him that there was an opening at CYA and that he should apply. A lover of politics and history, the opportunity to study the political climate and history of Greece was something that was too attractive for him to pass up (and of course, the prospect of having fun with his best friend in another country). And just like that, his life was changed.

His time at CYA cultivated his interest in international affairs, and he even credits CYA with helping him become a more global thinker. It encouraged him to see similarities among different people and cultures instead of just viewing them as separate groups of people. As he further reflected on his time at CYA, he concluded that one of the best things about CYA was the experiential learning— it brings to life the things that were being taught in the classroom. Whether it was going on a trip with CYA or without CYA, whether it was an archeological site or a hot tourist spot, it all allowed him to get to know the culture, the people, and feel for different parts of the country. His favorite trip, which also impacted him the most, was when CYA traveled to Mycenae in the Peloponnese— he gushed that the idea of an amazing culture and civilization existing in those mountains and seeing it in person was something that reading a book or hearing about it cannot encapsulate.

His stories and reflections on his time here suggest to me that the identity of CYA has not changed one bit. It continues to have a focus on experiential learning by integrating field trips with classes and continues to push people out of their comfort zones to really assimilate into the Athenian culture.

[su_note note_color=”#ffff” radius=”10″] 3 best things to do while in Greece according to Robert Leary:

CYA still takes that same trip to the Peloponnese (fun fact: I had coincidentally just gotten back from it the day before I met Mr. Leary); I experienced that same moment of awe when I looked at the Lion’s Gate and Grave Circle A at Mycenae after learning about it in my classes (albeit be thirty-five years later). I am noticing that I am having a more global view, and no longer stuck in my Bay Area bubble (and Claremont bubble—I’ve just been jumping from bubble to bubble apparently). I even came here for the same reasons as Mr. Leary—because of the importance Athens holds in terms of politics and history and the unique opportunity to see it all in person. This just goes to show the timelessness of the experiences and lessons CYA strives to provide.

Even though I am not entirely done with my semester here yet (thank goodness, I’m not ready to leave yet), I am already grateful for the environment of learning and growing that CYA promotes through its field trips, classes, and attitude towards being abroad.

Throughout the conversation, Mr. Leary reiterated a piece of advice to me that has helped him: Don’t go through life in a rush, and don’t be afraid to keep reinventing yourself along the way, even if it means taking a step back. Life is short, so have fun and work hard, but if you find that you are miserable move on.

[/su_note] * The author would like to note that in her experience, the classes provide a good supplement to this, so don’t be too bitter about taking classes while being abroad.

As I continue my life’s journey in Greece, I am excited to explore my passions and see how I will change as a person, whether it be to become a more global thinker like Mr. Leary, or to become confident in cooking something other than pasta (or both!). Only time will tell, but if I have learned anything from my time here and my conversation with Mr. Leary, it is that Greece will change you.