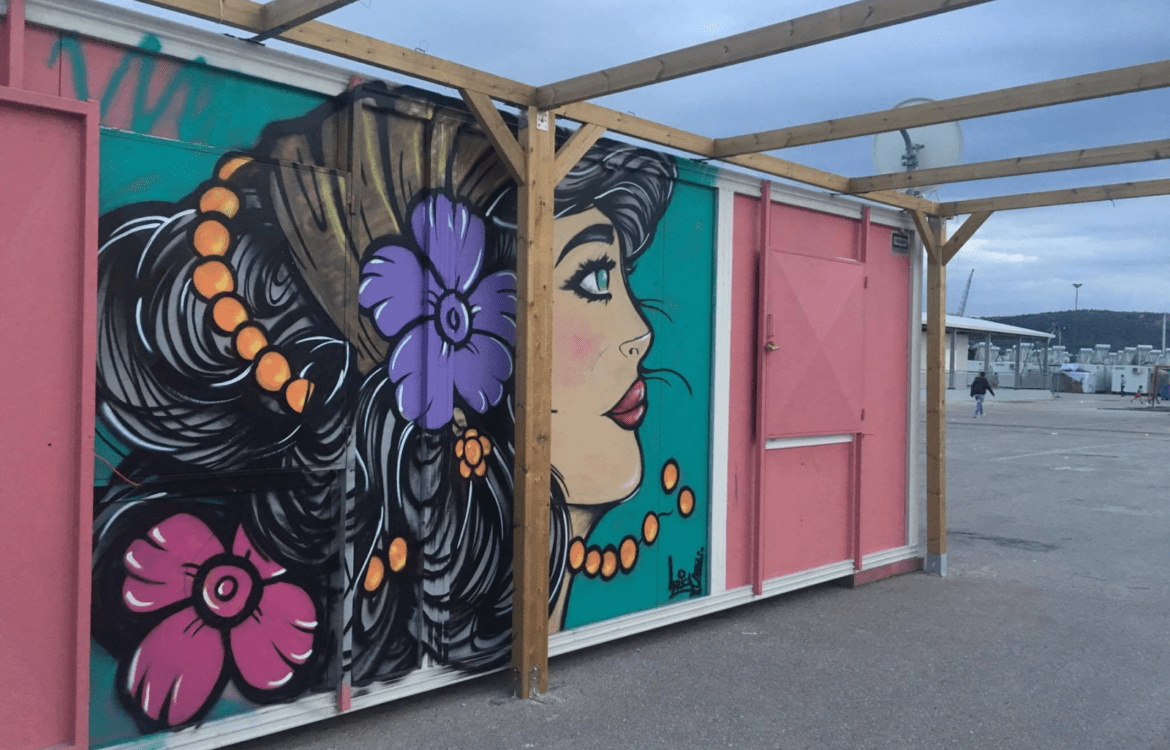 Bailey Kendall’s day at Skaramagas starts long before she steps foot on camp grounds. Every Wednesday, at 2pm, Bailey treks to the nearest metro line. There, she takes the blue line all the way to the end to Agia Marina, only to get on a bus—any bus that ends in the #6. She hops on and rides the bus until she reaches the stop at Skaramagas. Her journey is not yet complete; she has to walk through a dark tunnel, which leads to the edges of the camp. On Bailey’s first day, she followed a small crowd through a hole in the fence to find her way inside Skaramagas.

The camp is made up of ISO boxes, which look like cargo containers. These boxes have become the grocery, salon, daycare, and homes of the refugees. While this situation is dire and upsetting, Bailey finds the work she’s doing one of the most gratifying of her life so far. She has volunteered in the past with refugees crossing the border into the United States, but she says this job is different from any she’s done before. “I knew I wanted to work inside the camp. I wanted to go where people were, rather than a place where people come to.” She describes it as a front-row seat to reality; at the camp she is in the immediate vicinity of anyone that needs help.

Bailey volunteers at a hair salon ISO box. Canadian-born, Rita Continakis started this project when she noticed that there was an overwhelming amount of women that were hairdressers in their home countries. She decided to set up a hairdressing ISO box, where women could take their kids to play while they got their hair done.

[cover photo: Colorful graffiti art on the exterior of the Hair Salon at the Skaramangas camp]

Bailey says it’s a way for the women to escape, and enjoy themselves for a few hours. Most of them don’t even speak the same language, but that doesn’t stop them from bonding with each other. As a volunteer, Bailey mostly just watches over the children, and keeps the women company. She’s learned so much from them in the short time that she’s been working at the camp. She befriended a seventeen-year old girl who helps run the salon; her dream is to move to Germany and become a full-time hairdresser.

At Skaramagas, you are truly seeing a humanitarian crisis right in front of your eyes. Through this experience, Bailey has interacted with refugees in a way that many volunteers rarely do. She has been given access to their world here in Greece, she’s made friends with the women living here, and she’s played with the children growing up here. Volunteering at Skaramagas isn’t easy, but for Bailey, it is fulfilling.