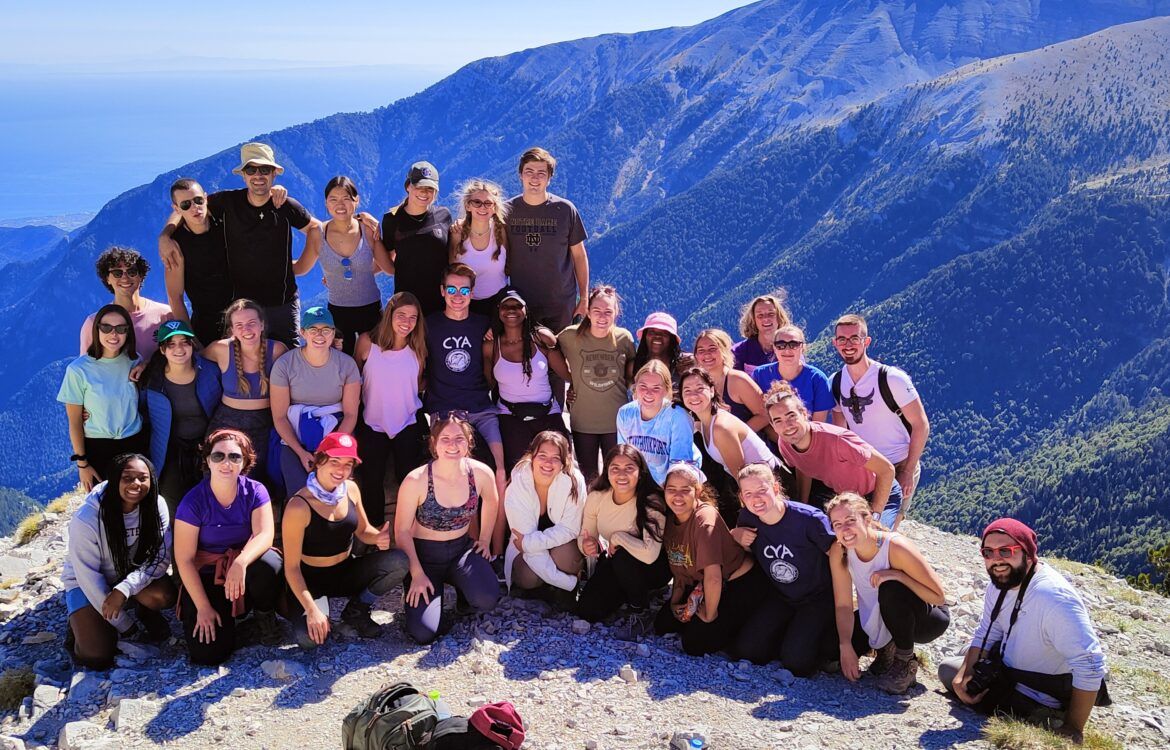 ‘Grateful for Mount Olympus’ – two CYA Students Write About Ascending the Mountain of the Gods.

Every Semester, CYA organizes a trip to hike up to the Skolio summit of Mount Olympus. Led by expert guides, the adventure starts with a 4-hour hike up to the refuge, where students stay the night. The next day, the group begins their final ascent to the summit!

Every student has a different story to tell from the hike, but all would agree that it is one of the most important experiences of their time in Greece.

The morning of August 16th, I received an email from CYA promoting a hike that would take place during my upcoming semester abroad. This overnight trek would take me to the second highest peak of Mount Olympus, Skolio, 9,551 feet above sea level. They specified that this would be a difficult, grueling climb that would test the limits of my body. They emphasized the importance of wearing layers, described the conditions of the terrain, made it very, very clear that this would not be an easy task for beginners, like me. Still, having never climbed a mountain this tall and under these conditions, I enthusiastically, maybe even naively, asked to be signed up for it. As the weeks passed, with the Olympus trip around the corner, it suddenly became very real. I became hyper-aware of the conditions of my body, noticed my breath after climbing a steep hill, after taking the stairs, or after going for a run. Suddenly, I was afraid, but still cautiously optimistic.

I wondered if it would be too hard (spoiler alert: it was), I wondered if I would give up (spoiler alert: I didn’t), and especially if it would be worth it. And to be quite transparent, twenty minutes into the hike I was already thirsty, sweating profusely, and rueing every single time I took the elevator instead of the stairs. I spent the entire first half of this trip wondering why on Earth I, the least athletic person I know, would willingly put myself through this. My body was screaming at me, my lungs burned, I was frustrated because I was not as fast or as agile as my peers at the front of the line. I felt like this until the sun began to set, and our guide, Xristos, stopped me and pointed at the most breathtaking view of the mountain ahead of us. Dusk painted everything a lavender color, and the full moon began to peek behind the trees and clouds. It dawned on me that very second, that this just might be a once-in-a-lifetime experience. I thought of the thousands of people who had made this trip, and wondered what their thoughts had been at this point of the hike.

Nothing could have prepared me for the stars. One by one, they appeared in the lapislazuli night sky, each brighter, each bigger than the last. Upon those stars, I prayed, thought of my family, so far away, yet still under the same blue sky, and expressed my gratitude for the opportunity of being in such a magical place. That is the only word I can find within my lexicon to describe what happened when I saw the stars: magic. Suddenly, there was nothing I wanted to do more than to touch them, to reach for them, to make more, and more wishes. The only way to reach them was by going up, so up I went, as fast as I could, as determined as anyone could be after walking for hours. And I was rewarded, for on the last turn before reaching our shelter, the Milky Way became visible, clear as day. It was then, finally, that I knew without a doubt that I was exactly where I needed to be. By the time I reached the shelter, nothing mattered. My exhaustion, my hunger, it all moved to the back burner of my mind and I was overcome with a sense of comfort that I can’t articulate with words. It felt right, I was proud. Making it to the top the next morning wasn’t as difficult, because I was still euphoric.

Mount Olympus taught me a lot about what I am physically capable of doing, but it also taught me a lot about who I need, and that is nobody but myself. Although the presence of my fellow CYAers made this experience extremely fun and memorable, when it was time to rally, to force myself to put one foot in front of the other, to get up after I fell (multiple times), I had to find that strength in the rocks and in the stars, in the moon and in the sunrise. I had to find it within.

Hiking Mt. Olympus was an incredible experience. Collectively, one of our favorite experiences in Greece thus far! Our guides were enthusiastic and knowledgeable (and hilarious) making for an awesome hike! The scenery was absolutely breathtaking, and we loved the sense of community at the mountain refuge.

Now – the hike. This was a challenging hike, but so rewarding. We spent three hours walking, climbing, scaling (and slipping!) up the trail to Prionia, the overnight mountain shelter. We went up, up, and up some more through forests and rock gorges. To put things in perspective, my friend’s Apple Watch said we had climbed 392 flights of stairs! All of us were exhausted by the end!

We started hiking at 5 pm and ended around 8 pm. It was a cloudy day with little sun, and for the last 45 min we were hiking in pitch black. I’ve never done a night hike before – let alone a night hike in the mountains. It was beautiful to watch the fog drop over the pine trees on the peaks, and to see the hazy sun slowly disappear from the sky. Near the top and after the sun had set, our guides had us stop at an overlook and sit in the dark. We rested, we listened, we reflected. How beautiful it was to stop and take it all in, in silence, together, if only for a moment.

The shelter we are at is a space of community for the hikers of Mount Olympus. We had huge plates of spaghetti, bowls of steaming soup, and mugs of homemade hot chocolate and Olympus tea. Definitely food for the soul.