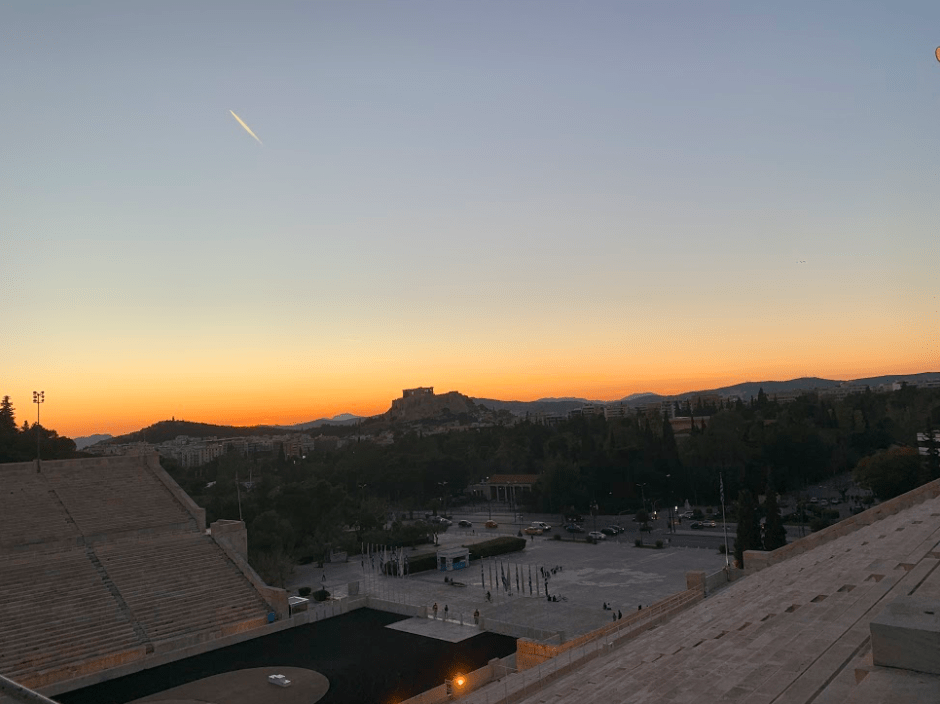 My Last Day in Athens: Reflections on an Early Departure

Going into the week of midterms, I had no idea what would be in store for the next few days. I was stressed out studying for my exams and had pushed all other thoughts to the side. Even on that Wednesday, when Donald Trump had announced the first of many travel bans from Europe to the United States, I wasn’t thinking about the possibility of having to go home. However, the next day I was forced to face reality when my home institution sent the dreaded email which told me that I was now required to leave my new home. Friday morning I woke up and was determined to make my last day in Athens a day worthwhile.

Over the course of the semester I had been pressing flowers into my journal from my favorite places that I had seen in Greece: wild flowers from Mycenae, violets from Olympia, and daisies from Messene. However, I realized that I had yet to collect any from Athens. I set off in pursuit that morning and was lucky to find some small white flowers as I passed by the Zappion. I sat on a bench for a while there looking up at the building that I had passed on my way to Syntagma Square so many times and hadn’t given much thought to. But I had to keep walking to my real destination; I crossed the street and walked past the Temple of Olympian Zeus, past Hadrian’s arch until I was finally at the steps that led up to the Acropolis.

It was a very hot day, perhaps even the hottest it had been since we’d arrived in January, and I felt the warmth on my back as I started the journey up. I used my ICOMOS card one last time, able to appreciate the value that it held with the free ticket in my hand. And I don’t know what I was expecting to happen when I got to the top; are there even flowers on the Acropolis? I couldn’t remember. But my question was answered quickly as I spotted some yellow flowers just as I walked through the Propylaea. And as I reached down to retrieve the flowers, I looked at the Parthenon up close for the first time in a long time and realized that this was the first time I had ventured to the Acropolis alone. And even though I was surrounded by hundreds of people, I felt like I was the only one there.

I spent my time that day just walking around the Acropolis again and again, taking in every last second of how incredible this city was. I looked out onto the view and tried to see if I could pick out all of the places I had been. The Panathenaic Stadium looked so small from a distance, but I felt the large hold that it had on me. I’m not sure when I decided to leave, but eventually I found myself walking back past the entrance and back to Pangrati. By the time I reached my apartment I was a sunburnt version of myself. As I started packing up my room, the sun started to set through my window and as the day started to slip away I realized that there was one last thing I needed to do: I needed to see one last sunset over the stadium.

I left my apartment in a hurry and walked up the street to the back entrance of the stadium, but to my disappointment found that it was padlocked for the first time this semester. Perhaps to encourage social distancing and prevent people from using the park? I wasn’t sure but just as I was about to walk home defeated, a group of guys my age walked up to the gate where I was. They looked just as disappointed as me but then one of them looked optimistic and beckoned the others to follow. I don’t know if I was just losing it at this point but I thought it would be a great idea to follow them. Sure enough, I saw them climb through an area of the fence and walk down a hill towards the stadium. When I reached the fence, I realized that I had climbed through this same opening the very first day that I was in Athens—a friend and I had gotten lost and decided to go through to find ourselves back at the stadium.

As I watched the sunset with the Acropolis in the distance, I realized something very important. Even though I could be sad right then, I chose not to be, because even though I had been acting like this was my last day in Athens it didn’t have to be. Of course, it was still a bittersweet moment. After all, I’m not sure when I am going to be able to return, but this city has been here for thousands of years, and it can wait a little longer. And even though our experience may have been cut short, that doesn’t make the time we had any less incredible or valuable. It’s just different than we expected. My only regret is that I didn’t spend my time in Athens like I did the last day: appreciating every part of what I loved about the city. But no matter what, I will always look back at this time in my life and know how lucky I was to have experienced all that I did and I will always be grateful to CYA for that.