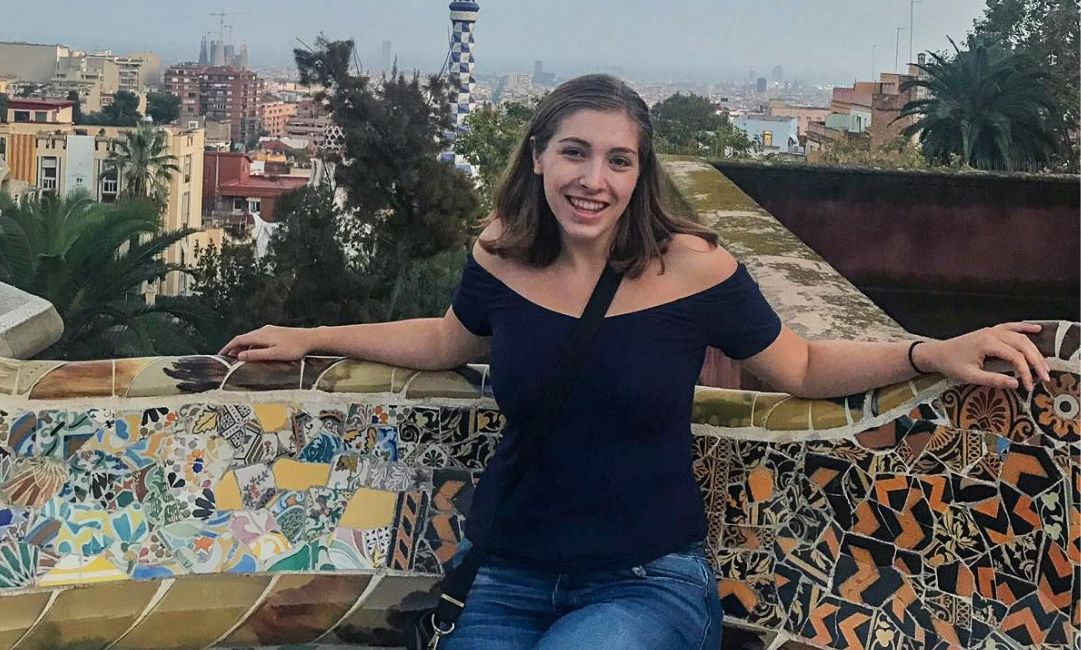 One of the biggest perks of studying abroad in a European country is that there are so many different cultures just a short plane ride away! While I’ve spent many weekends this semester exploring Greece, I’ve found that my favorite trips have been those to other countries. These trips have allowed me to learn about new places, try new foods, and have a change of scene  which has ultimately helped me to appreciate Athens even more.

Barcelona
Talk about a change of scene!

My first trip outside of Greece was towards the end of October, when I went to Barcelona. Talk about a change of scene. What people often forget about Greece is how new the country really is. Modern Greece as it is today was really only established in the mid-1800s after the Greeks declared independence from the Ottomans. Although the ruins of ancient Greece are still present around the city, most of the infrastructure is comparatively new. In contrast, Barcelona is an incredibly old city with a modern history.

The structure of the city as a whole makes you feel transported back in time, with its cobblestone streets and winding alleyways. While in the city, I got to visit the Gothic Quarter, where the infamous Ferdinand and Isabella of the Spanish Inquisition had their palace. I also got to learn more about the divide that still exists between Spain and Catalonia even though the two are technically the same country.

Additionally, I saw many architectural works by Gaudi, the famously brilliant architect, and got to visit his house in Park Guell! We even found some underground ruins from when the Romans had taken over the area, which was very cool and pretty unexpected. Not to mention that the food was amazing! We had the best paella and the tapas style of eating really reminded me of eating in Greek tavernas.

At the beginning of November, I then went on the optional CYA trip to Cyprus. This trip was my second CYA optional trip, the first one being to the beautiful island of Andros in September. The CYA optional trips have most definitely been some of my favorites because you don’t have to plan anything and your professors basically act as amazing tour guides! 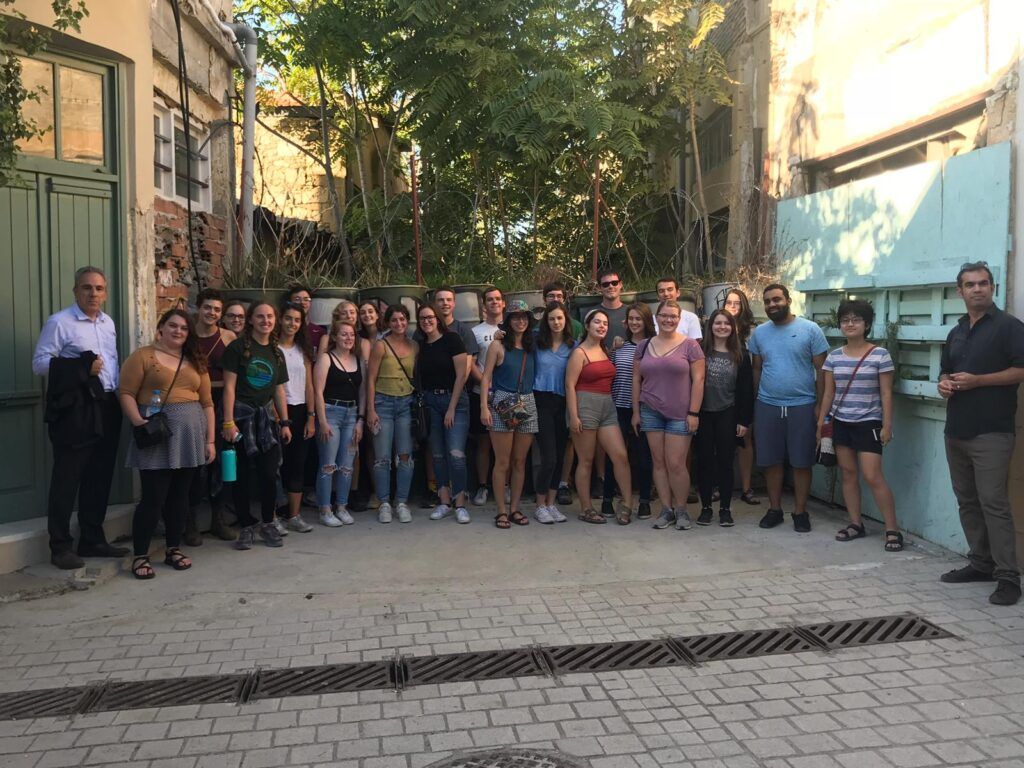 In contrast to Barcelona, which has a lot of history, Cyprus was all about the frozen conflict on the island between the Greek and Turkish Cypriots. Since I’m taking an international relations course this semester with Professor Dokos, who joined us on part of the trip, it was so interesting to see the buffer zone between the two regions and to learn about the issue while being there.

We also got to visit a museum, where we saw how different ancient civilizations such as Egypt and Greece impacted the life of ancient Cypriots, and we passed by the rock which marks Aphrodite’s birthplace! One of my favorite sites was the Hala Sultan Tekke mosque that we visited, which is one of the holiest places in the Muslim world.

The food on Cyprus was probably the biggest surprise to me because they are not known for their food, and it was amazing. The meze style of eating is very big on the island. Meze is very similar to tapas and basically means that there are many small plates shared between a group of people. But when I say many, I mean many! My friends and I went to a meze restaurant and were given twenty plates of food to share. We definitely didn’t make it through all of them but what we ate was delicious. But my favorite experience on Cyprus was seeing the sunset. It was redder than any sunset I’ve ever seen and a perfect ball in the sky. It was absolutely gorgeous.

Italy
I don’t think I will be able to eat non-homemade pasta ever again!

My next trip out of Europe was for Thanksgiving break, when I travelled around Italy for a week and then went to London to visit my friends from school. I have never eaten so much pasta in my life but I’m also not sad about this indulgence.. Throughout the week, we visited Naples, Rome, Siena, and Florence.

Our first stop in Italy was Naples where we also visited the ancient city of Pompeii. Being in Athens and traveling around Greece with CYA, we’ve all seen our fair share of ruins. But because Pompeii was covered by ash for a couple of thousand years, the entire city was incredibly well-preserved and we spent hours walking around it.

I was so excited to be in Rome because they had autumn there! Living in New York and going to school in Connecticut, I have never gone a year of my life without seeing the leaves change and it was something that I missed very much. So, being around the colors made me feel very comfortable and at home- I knew I was going to love the city from the beginning.

We stayed in Rome longer than we stayed anywhere else, so we got to try so much of the delicious food! I am now obsessed with Italian hot chocolate and I don’t think I will be able to eat non-homemade pasta ever again. And don’t even get me started on the cannolis and gelato. The only reason I didn’t gain twenty pounds on this trip is because we walked so much! But, we eventually had to leave.

Off to Siena! The town is situated in the Chianti region so of course we had to go to a wine tasting! We had a private tour of the La Lastra vineyard and learned all about what goes into making Chianti wine from how to plant the grapes to the percentage of Sangiovese grapes that have to be in a wine for it to be considered a Chianti.

The tour was very interesting, the views were beautiful, and the food was delicious.

After Siena, we went to Florence. Out of all of the places I’ve been in Europe, Florence was definitely the most beautiful. The river in the middle of the city makes for great pictures and the food is definitely insta-worthy.

We went to the Uffizi Gallery to see the Birth of Venus and then to the David only a few minutes away.

I had the most amazing panino, and Florence is known for its mushrooms, so I had some fantastic mushroom ravioli as well. For the sunset, we climbed to the Piazza Michelangelo and saw the gorgeous view.

I traveled alone from Florence to London which was a new experience in itself. I was very excited for London because I was visiting friends from my home school and even though they had come to visit me at the end of October, I missed them so much! I liked London more than I thought I would, probably because I was fairly homesick at this point and London feels like a more European New York.

We went to the palace to see the changing of the guards and did all of the typical tourist things, but my favorite part of London was the Christmas markets. They were so much fun! There were all sorts of Christmas things to buy and so much food that it was overwhelming. We also went to tea which was an amazing experience and I am now a strong believer that anything eaten from a fancy plate simply tastes better.

Overall, my time exploring Europe has been wonderful. Next weekend, I’ll be going on my last trip to Berlin and I can’t wait!