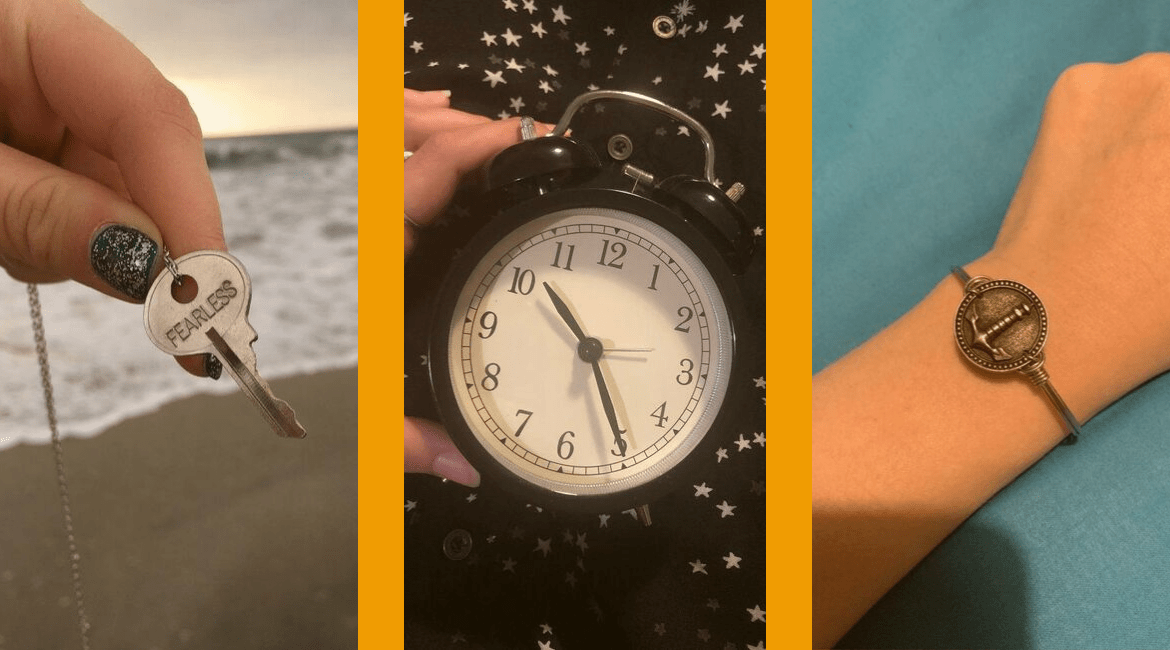 Reminders of Home for a Semester Abroad

What did CYA students bring from home?

One month ago, CYA students packed their bags and headed to the airport to come to Greece. While they all (hopefully) packed the essentials when they left home, what else did they save room for in their luggage? Jewelry, sporting equipment, instruments? Thousands of miles from their normal schools, what did students feel would help them feel at home in a new country? Read these excerpts about some of the unique items brought to Greece by students to catch a glimpse of some of the personalities here at CYA this semester.

Blaike brought a Giving Key, which is a necklace with a key charm and a word stamped on it that means something important to you. Her parents gave her a key that says “fearless,” encouraging her to challenge herself to be brave and try new things – important skills for spending a semester studying abroad! She says that the key has served as a reminder to push herself and remember that she is loved by her friends and family back home.

Andrew brought his boxing gloves in order to keep up his training while abroad. Back at Notre Dame, he is a member of Bengal Bouts, a boxing club that has been raising money for Holy Cross missions in Bangladesh for 90 years. This summer, Andrew spent eight weeks serving at one of these missions, teaching English and living in community with the Holy Cross priests and brothers.  Bengal Bouts hosts their main fundraising competition in February, so he brought his gloves in order to continue training so that he can compete for the third year in a row when he returns to ND.

Melissa brought her childhood teddy bear! She says that his current name is Ross, although she likes to pick a new name every few months just for fun. Ross has been keeping her company since third grade, reminding her of home during all her travels. Not only is he a cute and cuddly memento, he’s got practical uses too – like a pillow for the long plane ride to Greece! Ross’s shirt is even washed in the laundry detergent Melissa’s family uses at home, so she can take a little of the feel and smell of home no matter how far she goes.

Breanna brought her guitalele all the way to Greece! Though it’s the size of a ukelele, the instrument still has six strings like a guitar. She has had the instrument since middle school, and says that playing music has long been one of her key methods for coping with stress. While she wanted to continue playing music during her time abroad, bringing a full-sized guitar would have been difficult, so the guitalele provided a perfect solution! It still didn’t quite fit in her luggage, so she held it in her lap the whole plane ride to Greece!

Ariel spent hours making room in her luggage for her old school alarm clock! Every morning when she wakes up, she uses the alarm clock to check the time instead of her phone. In a busy day and constantly surrounded by technology, this simple clock gives her eyes and mind a break from all the bright screens. She started this habit about two years ago, and has been using the clock ever since. For Ariel, the clock was an easy item to bring that makes her feel at home.

Sela brought a bracelet given to her by her mom for her high school graduation. The silver bracelet features an anchor in the center, and the shaft of the anchor is actually a lighthouse. Since her graduation, Sela has spent a lot of her time traveling. She has traveled across the US, backpacked through Europe, gone to Africa, and now to Greece. Through all of these adventures, she has brought this bracelet with her as a reminder to always stay anchored, but never stop being free and adventurous.

Joey brought his Carolina Panthers keychain to carry his apartment keys around! Not only is it a banner of his favorite NFL team, but a reminder of home as well. When Joey was sixteen, he wanted the keychain for the keys to his future car. His parents bought him the lanyard for his 16th birthday, and told him that one more present that couldn’t be wrapped was waiting for him. While Joey immediately assumed it was a new car, his parents revealed that they had tricked him. The other present was not a car, but a subscription to Spotify premium. While he’s abroad, the lanyard is a practical way to carry his keys and remind him of fun stories of home.