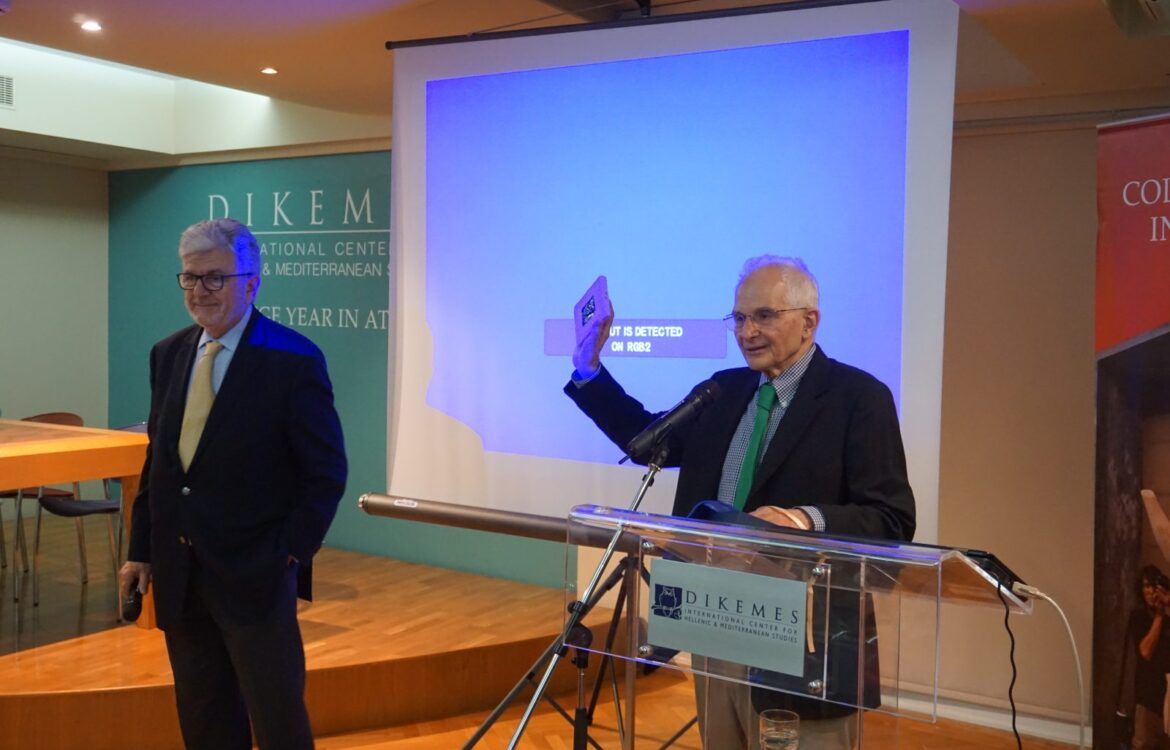 Revealing the Urban Realities of Athens

An article by Constantine S. Sirigos which recently featured in the Greek-American newspaper The National Herald gives an interesting insight into Vassilis Sgoutas’ keynote lecture: The Urban Realities of Athens as part of CYA’s 2nd Annual Student Conference on the Concepts of Urban Design and Public Space in Greece Throughout the Ages.

Here’s the article: Nature and Man, Chaos and Some Planning Shape Modern Athens into a World-Class City

Of one thing there is no doubt: Athens has changed dramatically through our lifetimes. A lecture recently hosted by College Year in Athens at its headquarters next to gleaming Kalimarmaro Stadium, as part of the CYA 2nd Annual Student Conference addressed the good and bad – past, present and future. Titled “The Urban Realities of Athens” and presented by Vassilis Sgoutas, distinguished architect and author of the recent book “A Journey with the Architects of the World,” the lecture packed Daphne and George Hatsopoulos Hall with CYA students and Athenians.
CYA President Alexis Phylactopoulos welcomed the guests and introduced Sgoutas and CYA Ancient History and Archaeology Professor John Karavas, who also addressed the theme. After a
lively Q&A, the guests enjoyed rooftop reception with a wonderful view of the Acropolis and Athens at night.

The talk was lightly structured but packed with insights. Sgoutas began by saying Nature has done its part, rhapsodizing about the survival of fauna described by ancient writers – oleander, shrubs and flowers, olive, cypress and pine trees – and bemoaning overbuilding that has led to a loss of the God-given glorious light of Attica. “Green space is diminishing,” sometimes by design, said Sgoutas, adding that in development plans anything that is not a building counts as “green space” – streets, paths, etc. so citizens are fooled by the developers and the politicians who approve the
plans.

He adores the natural colors of the region – ochre, terracotta, a variety of shades of green and, of course, the stunning Hellenic blues of sky and sea. But seemingly uninspired by nature, the architects of modern Athens were criticized for their lack of color in exteriors and exteriors – although Sgoutas says that is changing, especially inside buildings. There was a welcome digression into the use of color by the ancients, presenting those images that always surprise moderns. The building of a city is a blend of architecture and sociology. The story of the development of Athens, as is well known, is one of expansion and action without permission. “A self-regulated, self-evolving city” has seen a shrinkage of public and green spaces – the disappearance of sidewalks is a plague on residents and tourists alike, discouraging the latter from exploring off the beaten tracks. As with contemporary politics, anarchy has its place in the debate, and with a positive side. Many great cities, Sgoutas said, have a “disorderly chaos and richness that contributes to people falling in love with their theme. “Let ordinary citizens be the judge and not the purist critics – they tend to be dogmatic.” In the dialectic of illegal building and government response there is a kind of “urbanism of negotiation,” he said. That provoked the question of what would happen if laws and regulations were strictly enforced (something neither he nor the audience truly fears, however).
His slide presentation shed light on the question. An image depicted the hustle and bustle, and even disorder of ancient Athens.

“So we are truly their descendants. Athens would not be Athens without some disorder… Our DNA is not suited” to straight lines and blocks and programmed spaces, and strict regulation might lead to losses and gains. The age-old discussion about the place of Greece among nations followed: Is Athens an Oriental or a European City. It is obviously neither Sgourta said. “We are both,” with the Mediterranean being perhaps the best label as he pointed out that Athens is at the midpoint of the line between Zurich and Cairo. He said the great Manos Hajidakis, composer of the beloved anthem “Athena” believed Greeks are a special brand of Westerner, with special traits in which Mediterranean identity dominates everything else.

“We should play to our own strengths,” Sgoutas concluded, and briefly reminisced about the heydays of modern Mediterranean urban centers: turn-of-the-century Smyrna, Constantinople, Alexandria before WII – all with vital Hellenic populations – and post- WWII Beirut. Yes, Athenians love to complain, he said, but they would never trade their city for any other. And he sang the praises of EU-helped development like the Athens Metro, where every platform is accessible and which makes it a much more livable city. Addressing Athens’ run-down areas, he said they can be regenerated, citing recent successes in Paris – but emphasized it cannot happen overnight- nor is it desirable. Sgoutas distinguished good and bad graffiti – a topic picked up during Q&A – saying murals “add fun to a city.” He noted neighborhoods like Metaxourgeio, an area with a lively theater and artistic life but warned developers are poised for gentrification. He approves of the decline of the “anything but Athens” attitude that long dominated tourists and visitors from the diaspora alike, and he urged all travelers to Greece to spend a few days in the capital exploring its traditional charms and its multicultural elements and cosmopolitanism.

Link to the National Herald