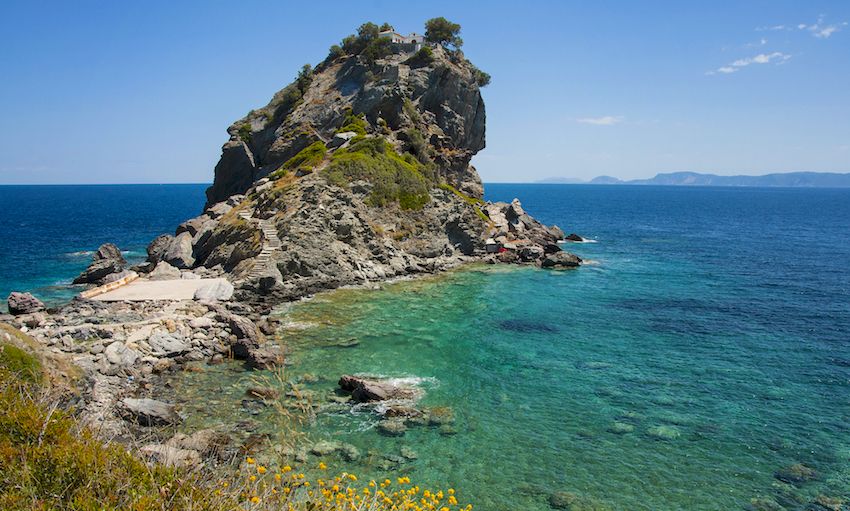 Greece is known for its breathtaking islands, where the water is so blue that you can see straight to the bottom, no matter how deep it is. There are so many islands that it’s overwhelming to find just one to travel to. We’ve narrowed it down for you by asking CYA students, staff, and faculty what their favorite islands are!

“It’s a large island on the east coast of Attica, it’s accessible by bridge and the thing is that different parts of the island have different terrain and offer different things to do. The northern part is the most beautiful – very green, very lush. It has a town that is famous for its thermal spas in Aedipsos. The main town, Chalkias is connected by bridge to the mainland, and it’s on the strait of Evripos where they have a unique tide where the waters seem to be boiling when the tide changes.”

“Because it has everything. Mountains, beautiful beaches, very good food, it’s not expensive and there’s a lot of tradition.”

“It was beautiful and the temple of Aphaia was cool because it was really well-preserved. We were able to walk around and see the beautiful views. There was also a pistachio festival going on while I was there so it was great to be able to partake in a little bit of Greek culture. It was a very different experience from being in Athens even though it was only an hour away. It was a very manageable get away from Athens.”

“I feel like when you go to Poros it’s like a weeks-worth of mental health days wrapped up in one day. So for me as someone who’s from a landlocked state, the open sea was really beautiful. I walked 14 miles across the island and there were spectacular views and small, adorable beaches.”

“It’s not very touristy. It has these positive vibes, it has an amazing monastery, the water is extremely blue and clean. And it has this lovely atmosphere that’s inspiring. It’s very relaxing and amazing!”

“It is less-known than some of the most popular islands like Santorini and Mykonos. And because it was less crowded I got to experience the island in a more authentic way. And it was beautiful.”

“It’s really pretty and it’s different from the Cyclades. More green, more trees. The pines are near the sea. You sit on the beach and on the beach there are pines.”

“It’s the island that my grandparents came from a hundred years ago. It is very wild with lots of undeveloped parts. Many of the people are slightly antagonistic to tourism which makes it fun. It has an interesting history as a place where communists were exiled and the people of the island took the exiles in. So that history of hospitality is a nice one. And it’s beautiful. The people are interesting.”

“It has a beautiful sunset, better than Santorini. There are also beautiful temples and they have catacombs which is very unique.”

“There are nice beaches, good food, nice landscape. There are trees and sandy beaches, and I think it’s very particular in terms of the mentality of the people. And it’s not overcrowded.”