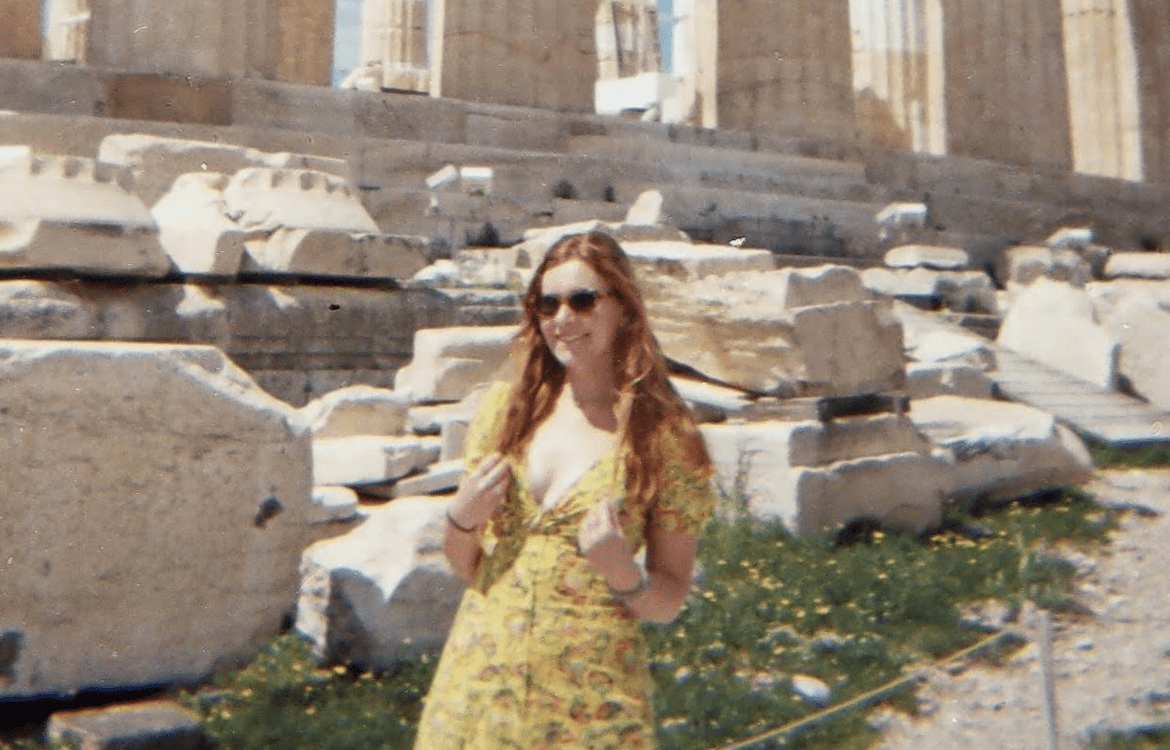 What happens when the kids who were way too into the Percy Jackson books grow up and decide to study abroad? They come to Athens, take CYA’s Greek Myth & Religion Course with professor Nina Papathanasopoulou, and become 100 times more obnoxious- at least I did. Since I was little, I loved learning about the unique and iconic Olympian gods, their favorite humans who became heroes, and their adventurous tales that included every beast or magical creature I could dream of. I took this course expecting to relearn the stories I knew as a kid, and that I would maintain the same interest and enthusiasm I had when I first read them. Now, at the end of the semester, I am blown away by how much Nina’s course reignited and added to my fascination with Greek mythology.

The tales I thought I already knew were brought to life in this course, under a new lens of societal and feminist analysis, through dissecting the words that make up myth to gain etymological understanding, and in adventures throughout Greece during field trips to the settings of the stories and sanctuaries of the gods. Nina prompted us to evaluate ancient Greek deities beyond their religious roles, and helped us in uncovering continuous themes under the surface of the stories. She gave us the floor for open discussion of why certain messages were ingrained so deeply in these myths, and she reminded us how important it is to use our personal experiences and contribute our individual takes- they all add new depth to the original work. This class made evident the deeper meanings in Myth that I never would have otherwise noticed: the evolution of the patriarchal power structure, the relationship between mankind and the various environments it inhabits, and the feelings of this ancient society towards the unanswerable philosophical questions that permeate our lives (the meanings of life, death, love, and free will were brought up, to name a few).

The name of Aphrodite took on new meaning as a story all itself and a tribute to the fear-inspiring and all-encompassing power of love. The paradoxical characterizations of motherly love and vengeful wrath in the goddess Demeter made new sense under the context of the unpredictable agricultural seasons experienced by ancient Greek farmers: bounty one year and famine the next. Nina led organized trips to sanctuaries like Eleusis and Delphi, early morning class held in the incredibly rare setting of an empty Acropolis, and my personal trip to Sounion all connected the fantastical celestial gods to the relatable experiences in the monotonous daily lives of earth-bound humans.

It was impossible to stay uninterested in class, and that interest was persistent outside of the classroom; I left each day armed with at least one new hot take, deep question, or fun fact that my roommates could not avoid unpacking with me. Class discussions felt like teamwork- in listening to my peers and voicing my own contributions, I was playing a part in the centuries-long attempt to understand the true meaning of the lasting works from the ancient Greek society that still affects us today. At the overdue push of assigned reading, I finally read the “classics” that I had previously considered the exclusive property of English majors, and I was shocked to find how much I enjoyed them. From ancient works like The Iliad, The Odyssey, The Oresteia, and The Bacchae came an innate desire to understand these original Greek myths and expand that understanding to their modern retellings. I sped through Madeline Miller’s The Song of Achilles and Circe on weekend trips to the same Greek islands the characters visited. Disney’s Hercules became a subject for accuracy analysis (it is not accurate, but so many small details come from ancient Greek truths and the songs are fun!). A pretentious, critical re-reading of the Percy Jackson series jumped onto my summer to-do list.

Every American who comes back from studying abroad thinks they have had the unique experience of discovering the secrets of the world; the key difference between myself and the millions who came before me is that when I say, “you won’t understand unless you study abroad”, I am correct. It is significantly due to my enrollment in this course that I feel enabled to so confidently claim that I am built differently. Obviously, I gained a lot academically from my Greek Myth & Religion class, but, in total honesty, the most powerful takeaway is a justified superiority complex towards courses on Greek myth taught in the United States. Conceptually, the content of this course may be covered, but there is nowhere better to learn about Greek myth and religion than its birthplace.

To put it plainly, learning about mythology just hits different here. Linguistic analysis coming from the mouth of your professor the native speaker is just more authentic and makes more sense. Socratic seminars in the states? Mid. Discussing ancient philosophical concepts in the city where Socrates himself lived? Elite. Oh, you looked at pictures of the sanctuaries of the gods? Delphi was (respectfully) my playground, I touched the poppies that symbolize Persephone at her mother’s sanctuary, and I can tell you firsthand how magical sunset over the Aegean sea from the temple of Poseidon is. Regardless of previous knowledge (as mine was limited to children’s books) or field of study (I am a neuroscience major who does not, and probably will never understand the minds of my Classics-major peers), professor Papathanasopoulou’s class has value and brings an incredible, unique perspective to a truly interesting subject. I came to Greece as a self-proclaimed annoying mythology nerd. Still, thanks to Nina and the eternal relevance of some really old books, I am leaving with the self-awareness that my current attachment to Greek mythology makes my pre-study abroad interest in the subject look like child’s play.