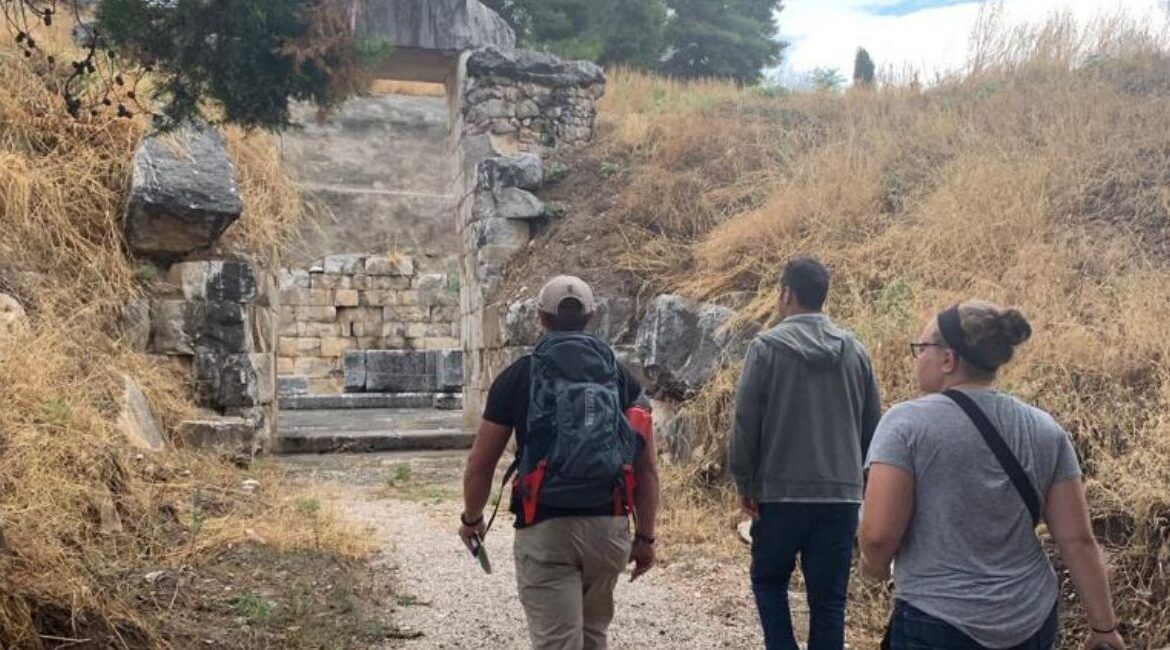 From Student to Intern | Following a Class Visit to Thebes

As a CYA summer 2015 student, I took two classes: Excavating in the Aegean: The Despotiko Field School and When Egypt Meets the Aegean: Interconnections in the Bronze Age Eastern Aegean. This summer I returned to Greece to serve as the MediaLab Intern here at CYA as part of my Master’s degree from New York University. For one of my tasks, I was fortunate to follow CYA professor Angelos Papadopoulos and the When Egypt meets the Aegean class -the very class I took as a student!- on a site visit to Thebes and Orchomenus.

Since I took the class in 2015, the syllabus has changed. Thebes was not a trip we took and instead we visited Aegina and the site of Kolonna. Being able to not only expand upon my own class experience but observe it through the eyes of the students was very rewarding. On this trip, I was able to photograph students at Orchomenus, a Bronze Age site with the largest Tholos tomb, the Tomb of Minyas. This tholos is special because it is large and its antechamber has a beautifully decorated ceiling with reliefs of spirals, rosettes, and papyrus flowers. Having visited the Treasury of Atreus at Mycenae, while I was a student, I found the visit very comparable and this suggests the importance of Orchomenus during the Mycenaean Period. As a Classical Archaeology graduate from the University of Michigan, I was excited to learn about this Tholos, as it was barely touched upon in my Greek archaeology classes.

Next stop Thebes, a place I’ve always wanted to visit as it was a familiar name from reading about Oedipus and learning about other mythological stories in my Greek Mythology class. The new Archaeological Museum of Thebes opened in 2016, the year after I was a student at CYA. On this site visit, we were able to learn about Egyptian, Minoan, and Mycenaean influences in the region through the exquisite wall paintings, stirrup jars, and cylindrical seals made from Lapiz Lazuli, which were likely gifts from the Egyptians. These seals are the only of their kind found in Greece and suggest the wealth, importance, and power of the region.

As a Classics grad and a CYA alumna, it was a unique experience to follow around a class I took as a student. It was intriguing seeing the way the class has changed and hearing from CYA professor Papadopoulos about the new course additions. Being able to capture this field study as the MediaLab intern was amazing. While I may no longer study archaeology, my interest in the field and my memories of both my CYA summers will remain.