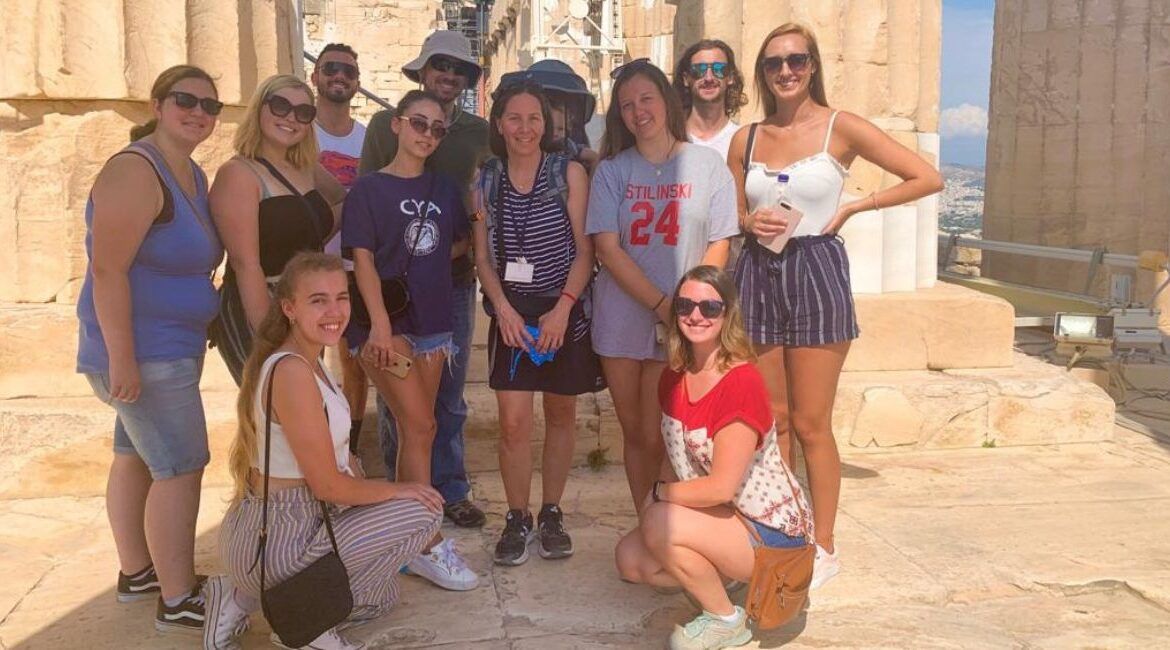 Going Where Few Go | Behind the Scenes at the Acropolis

The stares. This is what happens when you step over the rope into the spaces few go, but many wish to visit. Students in the “Illegal Antiquities” class, led by CYA professor Zoë Κοntes ’95, climbed the steps of the monumental entrance and then entered the Propylaea by stepping over the rope all wish to pass.

Inside the Propylaea students were able to observe and discuss the restoration work being done on the Acropolis. They also had the opportunity to compare this work to the restoration of other sites they have visited, such as the Minoan palace of Knossos.

Students were fortunate to have a special guide show them around the Propylaea. We ran into Giannis Moraitis, an old acquaintance of Professor Kontes (he was her gym trainer in 2003 when she was a graduate student at the American School for Classical Studies). Moraitis now works full time as a restorer on the Propylaea, and he showed us around the different parts of the building while explaining what work they are doing and why.

For me, one of the most interesting parts of the tour was hearing from professor Kontes about the reconstruction advancements of the Acropolis. She described the differences she noticed with both the Propylaea and the Parthenon. The last time she was in the Parthenon was in 2002 and much has changed as most major reconstruction projects have concluded.  Her discussion of the reconstruction of the Temple of Athena Nike is what truly stood out to me. Would you believe that on one of her earlier visits to the Temple of Athena Nike, it was simply a platform? Today it is a completely reconstructed temple!

Students also visited the Parthenon where they went inside to observe more closely the reconstruction works. This visit complemented their class discussion on the so-called Elgin Marbles and the looting and removal of antiquities. Their class also had a debate about whether or not the marbles should stay in London or be returned to Athens. While the debate ended in a tie, the class consensus was that the marbles should be returned to Athens and be installed in the Acropolis Museum, which students also visited as part of their class.