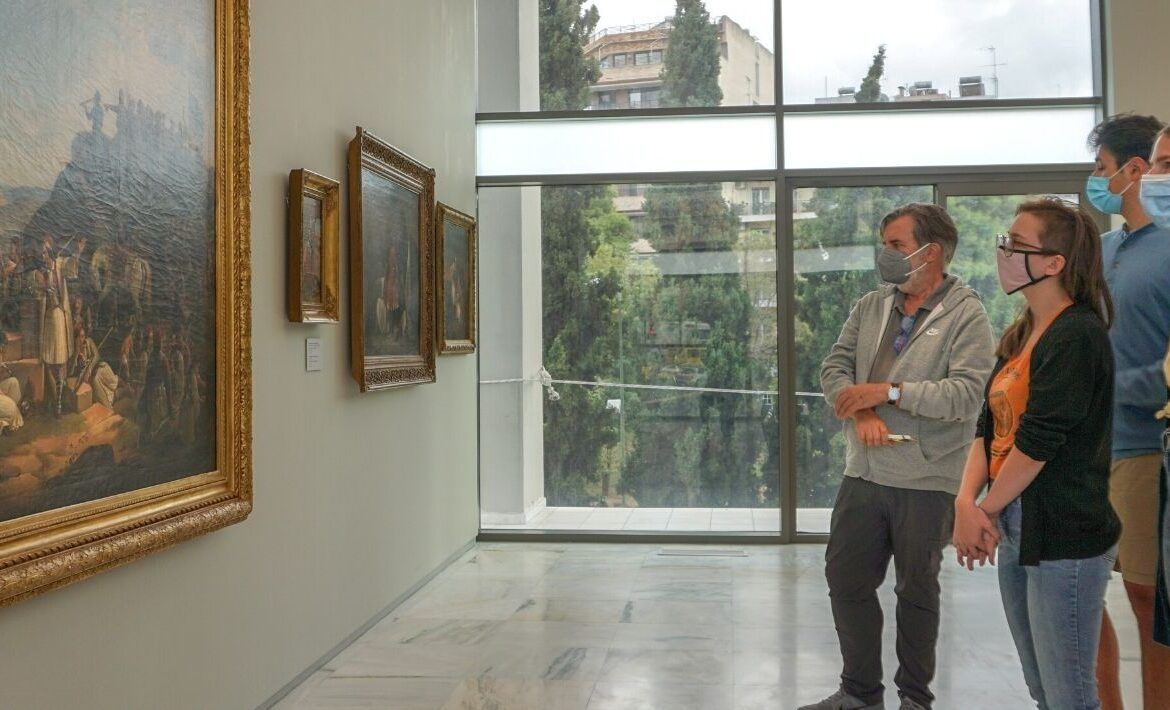 Exploring the Greek Revolution, American Philhellenism, and Beyond

What were the motivations of the American Philhellenic movement? What types of support did Americans offer the Greeks? Why did many of them go on to join the Abolitionist movement? These are some of the questions explored in the CYA course Americans & the Greek Revolution: from Philhellenes to Abolitionists, taught by Alexander Kitroeff.

Class meetings focus on the analysis of sources, with an emphasis of conversation and exchange of ideas. But out-of-class visits are just as important.

Earlier in the semester, the class had the opportunity to visit the newly opened and refurbished National Gallery of Athens. The Gallery displays paintings by European and Greek artists and stands out for its nineteenth and twentieth-century Greek paintings and sculpture collection. The students were impressed with the exhibits and especially the work by Eugène Delacroix’s ‘Episode from the Greek War of Independence’ and Nikolaos Gyzis’ painting about the destruction of the island of Psara.

The class also visits the Athens Museum of Philhellenism, the exhibition on American philhellenism at the Gennadius Library of the American School of Classical Studies in Athens and the monument to American Philhellenes in Athens.

Prof Alexander Kitroeff, DPhil (U of Oxford), is a valuable member of the CYA Faculty. His research focuses on identity in Greece and its diaspora. He is involved in different exciting CYA projects around his area of expertise. One of them is the CYA Hellenic Executive Program – a series of online educational seminars offered to people who desire to further their knowledge on all topics associated with Greece, from ancient civilization to modern-day development.

The first seminar of the CYA Hellenic Executive Program, a unique initiative formed in collaboration with the Hellenic American Leadership Council, was taught by Prof. Kitroeff. ‘The Emergence of the Greek State’ followed the evolution of Greece from the eve of the revolution through the consolidation of the modern state in 1821. The second seminar, titled Greece Enters the Twentieth Century, which is scheduled to begin on November 6, follows Greece’s independence and the consolidation of its government and political system achieved between 1821 and 1863. It is during this time that Greece enters a new period in its history.

Alexander Kitroeff was born in Athens and educated in the United Kingdom where he received his doctorate degree in modern history from the University of Oxford.

He is a Professor of History at Haverford College in Pennsylvania. He has taught at several other institutions, including the Center for Byzantine and Modern Greek Studies at Queens College CUNY, the Onassis Center for Hellenic Studies at New York University, The American College of Greece, and College Year in Athens. He served on the editorial board of the Journal of the Hellenic Diaspora from 1980 through 2013, when the journal ceased publi­cation.

Kitroeff has published extensively.  His most recent books are The Greeks and the Making of Modern Egypt (2019) which is also being published in Arabic and in Greek, and Greek Orthodoxy in America: a modern history (2020.) He has also collaborated with film director Maria Iliou in several documentary films, the most recent being “Athens Between East & West, 1821-1896”, the first of a 5-part series on the city’s modern history.

Kitroeff is currently working on two book projects, a history of the American Hellenic Educational Progressive Association (AHEPA) and a history of Greek-owned diner restaurants in America.