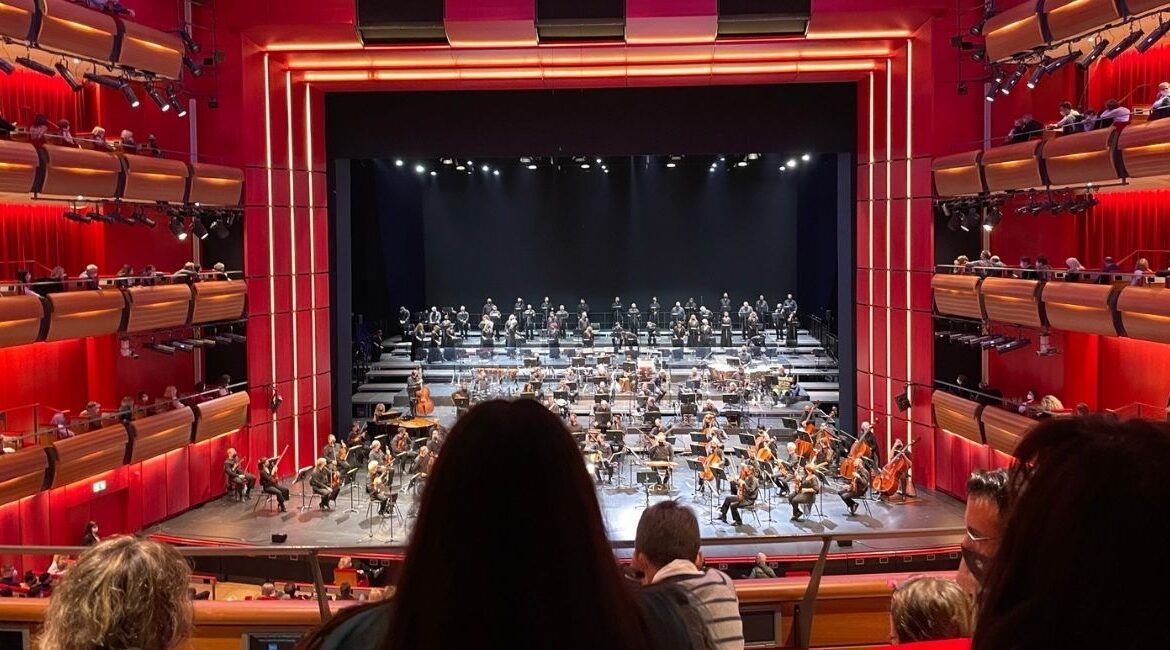 From the Stage to the Court: the Embrace of the Greek Crowd

Athens has a way of stealing my heart no matter what it is I am doing. Athens is special, from its streets to its cotton candy afternoon skies, I spend my days wondering and waiting for the next experience, the next detail that will enamor me completely. I expected to find this in the arts, as I have always been artistically inclined, coming from a very musical family and loving performing arts myself. I had the opportunity to attend the closing night of a film festival dedicated to Italian director Federico Fellini. That night, the place was fully booked, and our names were put on a waiting list with others, hoping that a spot would open up. Fortunately, it did, and we were able to watch the screening. The movie was La Strada, considered to be one of his masterpieces. As I sat there, I could not help but feel the importance of that moment; it was truly a multicultural experience. There I was, little, old, Dominican me, sitting in this theater. Next to me, my dear French friend, watching an Italian film, with English subtitles, in the heart of Kerameikos, Athens, surrounded by Greeks. I thought at that moment that my mission was complete. If, for whatever reason, life made it so I had to get on a plane back home the next day, I would be content. That moment right there, that hour I borrowed, symbolized so much of what I expected of my study abroad experience. Or rather, of the experience of living abroad and belonging to an international community.

Since then I have had multiple encounters with the artistic scene around Athens. I mean, here there’s art everywhere (and yes, I also mean this figuratively. To be honest I find everything around this city to be extremely beautiful, even the way people say παρακαλώ to me, always emphasizing that last syllable). I have been able to watch incredible theatrical performances, from Ancient Greek plays such as Orestes at the Odeon of Herodes Atticus to more modern plays in contemporary stages, Athens revealed a vibrant theater scene. But no moment touched me as deeply as the ending of Axion Esti, at the National Opera. My theater class took us to the Opera on Halloween night to watch this performance, with music composed by the late musician Mikis Theodorakis. Theodorakis passed away just a few days after our arrival, and since, I have been able to see how deeply loved he was by the people. I felt this respect and admiration towards him when, after the main performance ended, the orchestra performed Theodorakis’ song Tis Dikeosinis Ilie. Everyone, and I mean everyone in this opera house rose from their seats. Young and old, everyone joined the performers in their singing, honoring Theodorakis. Suddenly, hundreds of voices filled the air beautifully. Even though I didn’t understand the lyrics beyond a few words, it was impossible not to be moved by the sheer joy that covered the room for those few minutes.

I wondered if I would be able to see that contagious, collective enthusiasm again, and so I sought it out. And what better way to find an excited crowd than attending a sporting event? The first time I made my way to the Athens Olympic Sports Complex, my friend had secured us really good seats for a Panathinaikos vs Fenerbahçe game. She was friends with one of the players and he was generous enough to get us three tickets. Even though the courtside wasn’t as rowdy as the seats in Gate 13th, reserved for the most enthusiastic fans, as the game progressed I could feel that energy simmering around me, coming to a boil. By the end of the third quarter, everyone was at the edge of their seats, regardless of where they were sitting in this stadium. I promised myself I would come back and sit with the crowd. My mother, an avid sports fan always says “en Los bleachers es que se goza”, or “the bleachers are the most fun”, so I decided to follow her advice and got myself and a friend tickets to another Panathinaikos match, this time against Anadolu Efes, another Turkish team. This time, from the second I stepped into the stadium and as the seats filled up, I felt like I was about to be a part of something exciting. This time I didn’t just see the chanting, the dancing, the screaming and the jumping from afar, but was encouraged to participate in it myself. Once again, young and old, women and men, everyone would stand up in anticipation before a player shot the ball, and jump with excitement every time they scored. A sea of singing green swayed in waves, up and down as people got up and sat back on their chairs, and as they roared in joy or in disappointment. People sang the entire game, there was never a quiet or dull moment, and I felt surrounded by such a bright energy that after the game was over I left the sports complex feeling almost floating.

I came to the conclusion that what makes these experiences so special, so memorable, is not the games themselves, nor the artistic performances, even though they are beautiful and brilliant by nature. The link between these two very different things (film and the opera and basketball are not necessarily the most common combination), is, well, the people. If there’s something Greeks will do, that is to get up and cheer. They’ll cheer for the music, they’ll cheer for the players, they’ll dance and scream and express all those emotions loudly and proudly. Oddly enough, instead of making me feel like an outsider, this energy always feels like a warm embrace, hence why I keep looking for it– and finding it, in the most random of places. In my country we say que el dominicano baila hasta los anuncios, “Dominicans will dance to everything, even to the commercials”. I would say the same thing about Greeks. And what a beautiful thing to have in common! If there is anything everyone should share or be able to express is that raw, spellbinding joy. That joy that makes you feel light on your feet and makes you tired, and fills up the body and screams from every single one of your nerve endings. I will always thank Greece for giving me that joy, may it follow me around everywhere I go.