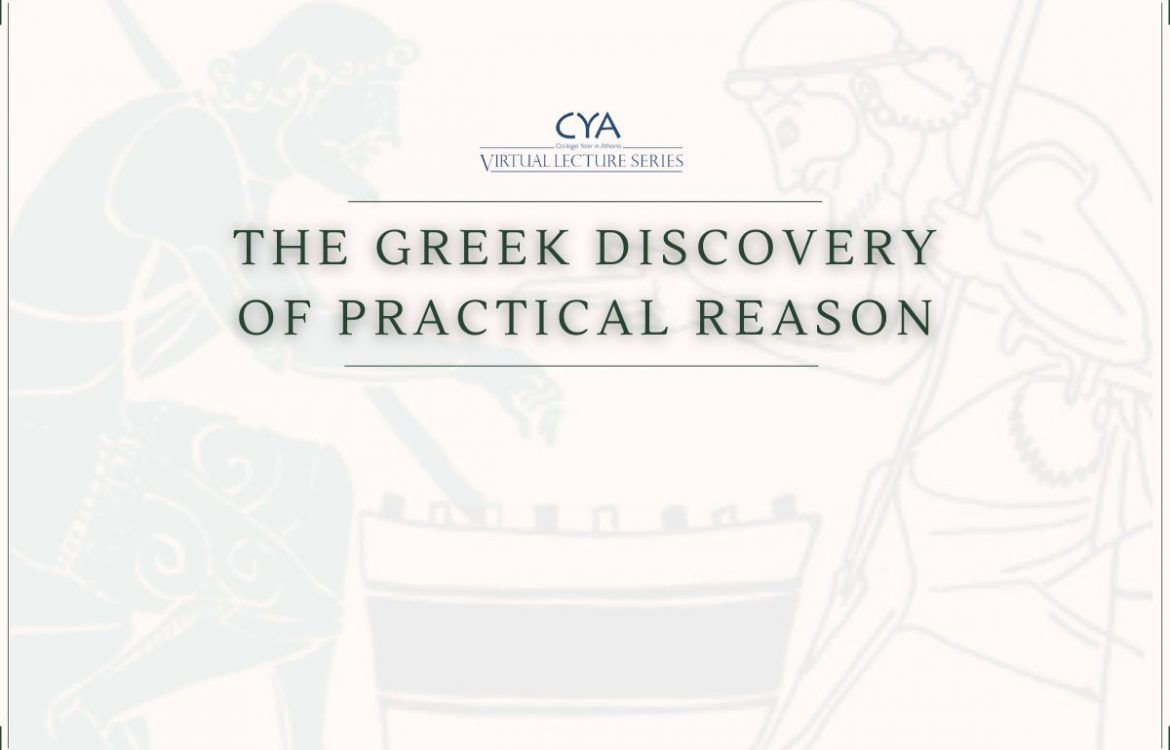 On Wednesday, November 30th, CYA hosted a lecture as part of its Virtual Lecture Series: The Greek Discovery of Practical Reason, with Prof. Josiah Ober and discussant Voula Tsouna.

The lecture focused on a case made in his latest book ‘The Greeks and the Rational’, that, counter to modern an ancient arguements, Athenian Democracy was not an institution fraught with irrationality. Instead, Ober’s analysis demonstrates that the success of the Athenian state was a result of the Politeia’s rational institutions and the constant improvement of them through practical reason.

Ober began his lecture by setting the background of his analysis on the theories of Ancient Greek Ethics and Politics, born from the question ‘How should we live’? Set by Socrates and Plato. Their answer was twofold. Ober focuses on the second part, ‘pursuing the good using instrumental reason’. The question here is ‘How can many people, as a collective agent, create and sustain a constitutional order enabling them to gain their desired ends?’

The speaker went on to analyze Socrates’ and Plato’s accounts of rationality, split between Instrumental and Ethical. Soon after he presented Plato’s case of Democratic irrationality, based on the argument that freedom and equality, unlike honor or wealth, are not rational elements.

“As a result of the interaction of freedom with equality, each of many goods catches his [the Democrat’s] attention momentarily. Each is avidly pursued, then easily dropped in favor of some other freely available and equally desirable alternative.”

Ober then went on to present the continuation of the argument of Democratic Irrationality after Plato, citing modern and even contemporary thinkers like Joseph Schumpeter, William Riker, Brian Caplan and Jason Brennan.

“And yet, Democracy does deliver certain goods” says Ober, beginning the analysis on his case of that Democracy did not suffer from the described forthcomings and was in fact based on Rationality. Ober’s arguments here are best summarized by Voula Tsouna during her ending remarks:

“First, Athenians value and pursue, consistently and above all other things, security, welfare, and the avoidance of tyranny.  Both collectively and individually, they make choices on the basis of beliefs informed by experts and act in accordance with hierarchically ordered preferences.  Second, Athenian democracy promotes or facilitates what Josiah Ober calls ‘bargains’, which I understand to be productive compromises between the interests of competing groups – a feature that presupposes rational articulation and a certain consistency of preferences over time.  Third, the norms, institutions, and mechanisms of Athenian democracy in the post-classical era both presuppose and express instrumental rationality.”

Through Ober’s lecture, the audience received his strong case of Democratic Rationality, and at the same time understood his recognition that the selfish pursuit of interests can also prove a threat to the survival of the community. Ultimately, through his analysis, Ober addressed a deep social truth: that cooperation is “a choice that must be made time and again if people are to live well, together”.

A Q&A session followed with many engaging questions from the audience.

We would like to thank Prof. Josiah Ober and Voula Tsouna for this event. You can view the full lecture on our Youtube Channel.