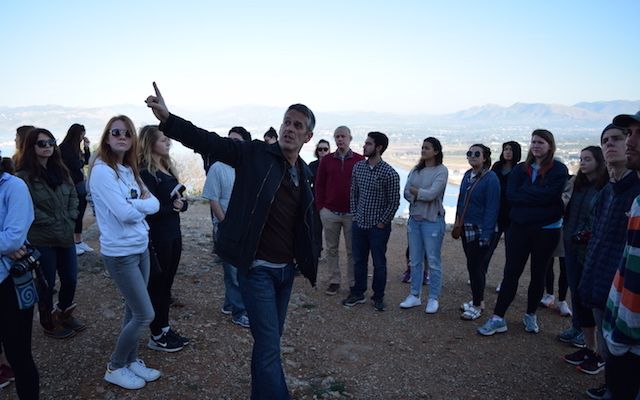 A young Alexander The Great passing by…

I can vividly recall the look and the awe on my student’s faces when we enter the interior of ancient buildings such as the Parthenon, the Propylaia or the Temple of Hepahaistus. Or their joy and astonishment when they get to run on the ancient tracks of Olympia or Nemea.

I have been a member of the CYA faculty for almost 14 years now and, for my part, this has repeatedly proven to be a life altering experience for me. Much of what makes this experience so worthwhile has to do with the reaction and the feedback I get from my students, be it in class or more often, on site.

I can vividly recall the look and the awe on my student’s faces when we enter the interior of ancient buildings such as the Parthenon, the Propylaia or the Temple of Hepahaistus. Or their joy and astonishment when they get to run on the ancient tracks of Olympia or Nemea. There happen however, to be certain incidents or memorable moments that I would still single out as perhaps the most memorable ones.

For my Ancient Greek athletics course, I tell my students from the very beginning about the enviable, prestigious, almost divine like position that Ancient Greek athletes enjoyed within their contemporary perspective. Being an athlete is a title they should carry with pride. One of my students took this a little too literally… When in the Panathenaic Stadium and as we were preparing to “re-enact” the Stadion race (ancient sprint) within its track, a group of tourists approached us and asked said student what we were doing and, most importantly, if they could participate; She turned around and replied, rather nonchalantly, “No, sorry, you can’t; this track is only reserved for Ancient athletes – only we deserve to run on it”!

Another incident I fondly recall happened during a visit to Pella, the capital of Ancient Macedonia and the birthplace of Alexander the Great. After guiding the students around the site, I gave them the customary 15-20 minutes to roam around by themselves. After a while I noticed one of my students, sitting near the Villa of Dionysus, head between legs and almost in tears. I asked him if he was OK and he replied:

“Professor, the first book I ever remember reading was on Alexander the Great. Ever since then, I have read all there is on Alexander, both ancient and modern; I know all there is about him and one day I hope to become an Alexandrine scholar. Yet, nothing could have prepared me for this: being on the very spot where Alexander grew up, where a young Alexander lived and dreamed of future greatness. I think that if I close my eyes, a young Alexander will pass by… If you don’t mind just let me sit here a little while longer…”

* A graduate of the Universities of Oxford and Durham, Dr. Karavas’ main areas of interest lie in the fields of Hellenistic and Roman History, Roman provincial archaeology (with a special interest in Roman frontiers) as well as ancient warfare. He has been associated with various research groups and institutes both in the U.K. and in Eastern Europe. Forthcoming publications include The Evolution of Roman Frontier Fortifications in the Province of Moesia Superior (1st-6th Century A.D.) and War and Peace on the Danube: A Documented History of Roman Military Involvement on the Danube Frontier Region (1st-3rd Century A.D.). In 2005, he became a regular contributor to the Lexicon of Greek and Roman Placenames, a publication series that aims to provide up-to-date information on all ancient sites in the Eastern Mediterranean from the Archaic period up to late Antiquity. Over the years he has participated in many excavations in Serbia, Romania and Greece and is currently the Co-Director of excavations at Halmyris, a Greek/Roman/Byzantine military and civilian site on the Danube Delta in Romania and the Co-Director of excavations at Drajna de Sus, a Roman legionary fort in central Romania.