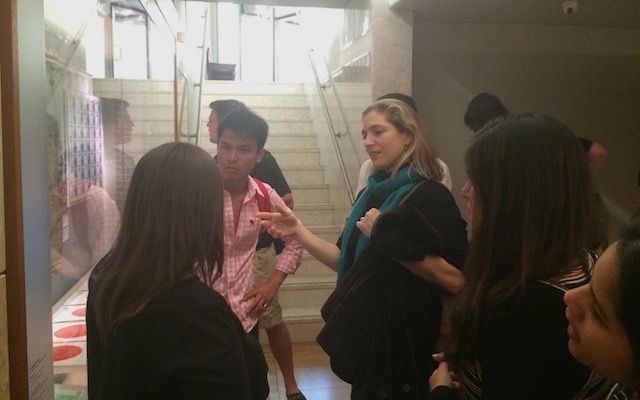 Living and studying in Greece during these most difficult and challenging times seems to have brought out the best in many of my students. They have shown an interest in seeing and experiencing first hand the social repercussions of the ongoing crises…

My students often tell me they feel like they are experiencing history in the making during their stay in Athens. My classes – on European integration and the crisis in Greece and Europe – certainly have a ‘breaking news’ quality, inevitably. Every day there is something new, some latest development concerning the issues we are studying, leading to lively class discussions and debates: new austerity measures being discussed in the Greek Parliament, visits from representatives of the Troika in Athens, the very visible economic and social impact of the Eurozone crisis, the influx of refugees into the country, the impact of Brexit, the rise of terrorism and extremism in Europe… all interlinked and interdependent. We frequently joke with the students about how often I have to change and update the readings in order to keep up with current events and that our class has turned into an academic cliffhanger with so much suspense – Athens being the epicenter of History in the making in Europe and the Middle East.

Living and studying in Greece during these most difficult and challenging times seems to have brought out the best in many of my students. They have shown an interest in seeing and experiencing first hand the social repercussions of the ongoing crises: they have witnessed anti-austerity demonstrations, engaged in lively conversations with Athenians hit by the crisis, volunteered at various non profit organizations such as Doctors Without Frontiers, visited refugee shelters, spent their weekends interacting with and entertaining refugee children. My classes are inevitably combining both theory and action in a hands-on, unique way.

When my students write to me after they leave Athens, their most common expression is “I can’t even begin to tell you what a life changing experience this was”. Without exception they tell me that they have been so moved and so deeply affected by what they have experienced and seen during their stay in Athens, that they long to come back, to work (teaching English) to volunteer, or just to visit. Their love affair and knowledge of our contemporary world started in Greece, at CYA!

* Ritsa Panagiotou is currently a Senior Research Fellow at the Centre of Planning and Economic Research in Athens. Her research interests include European political economy, the political and economic development of the Balkan region, and the European Union’s Balkan enlargement. She has published in many scholarly journals, including Communist and Post-Communist Studies, Journal of Balkan and Near East Studies, and Journal of Southeast European and Black Sea Studies. Dr. Panagiotou holds a BA (Cum Laude) in Political Science and Russian from Wellesley College. She spent her Junior Year at the Institut Etudes Politiques (Sciences Po) in Paris, where she received the Certificat d’Etudes Politiques (Distinction). She earned an MPhil and a DPhil in International Relations from Oxford University (St. Antony’s College). For several years she worked as a Research Associate at the European Business School (INSEAD) in Fontainebleau, France. She has been a Visiting Professor at the Athens University of Economics and Business and at the University of Athens Postgraduate Programme in Southeast European Studies. In 2011 she was a Visiting Research Fellow at the European University Institute in Florence, Italy.