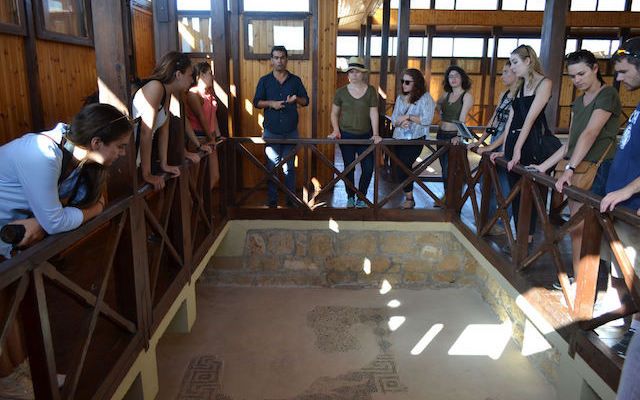 Personal experiences reveal the human element: the craftsperson behind a black-figure vessel, the oarsman on board the trireme, the mason or the potter who left a mark on a building or a vase respectively.

As an Athenian, who was educated in the U.K. and currently working in Greece and Cyprus, I strongly believe that the best teaching method is the one that includes experiential activities.

My interaction with students from various educational and social backgrounds and traditions has made me a strong supporter of hands-on actions, site visits, the exchange of views and ideas with skilled individuals and specialists. Having that as a central idea, the students experience a great variety of activities (depending on the course) from working on metal, such as copper and lead, following Mycenaean techniques, to making their own colours and applying them on the plaster in order to create a Minoan-style wall painting. The combination of a) reading about an object, let us say a small metal horse statuette made in the 7th century BCE with the ‘lost wax’ technique, b) examining the object from a close distance at the Museum and then c) recreating the actual technique itself within the CYA facilities, definitely gives the students the full picture as they become part of its manufacture process.

This approach can be applied to greater features as well, not just portable works of art. A recent class visit to the replica of the 5th century BCE ‘Olympias’ at the Floisvos Harbour, after discussing its construction in class, really boosted the students’ enthusiasm and at the same time it helped them understand and remember easier when, how and why such a warship was made.

Finally, these personal experiences reveal the human element: the craftsperson behind a black-figure vessel, the oarsman on board the trireme, the mason or the potter who left a mark on a building or a vase respectively.

As a student myself I was fascinated by the magnificent mural paintings found at the site of Akrotiri on Thera (a town of the 17th c. BCE that was covered by the volcanic material during a major eruption) to the extent that this is the reason why I became a prehistoric archaeologist.

Several years later, here at CYA, together with colleagues and collaborators, I am teaching the fresco technique to students who really feel like a Bronze Age painter, as they are truly find themselves in his shoes.

* Angelos Papadopoulos holds a BSc in Archaeology from the University of Bournemouth and an MA in Archaeology from the Institute of Archaeology, University College London. After receiving his PhD from the University of Liverpool he was employed by the Department of Antiquities in Cyprus. He has been involved in a number of research projects in Greece, Cyprus and the UK, while working on museum exhibitions, excavations and various publications. His research interests focus on the prehistory of the Eastern Mediterranean (especially the interconnections between the Aegean, Cyprus and the Levant), Bronze Age iconography, warfare and burial practices and his publications deal with these topics. Dr. Papadopoulos has co-organised three international conferences in Dublin, Athens and Nicosia and is currently a postdoctoral researcher at the National and Kapodistrian University of Athens working on the unpublished material from the Bronze Age cemetery of Kourion in Cyprus.