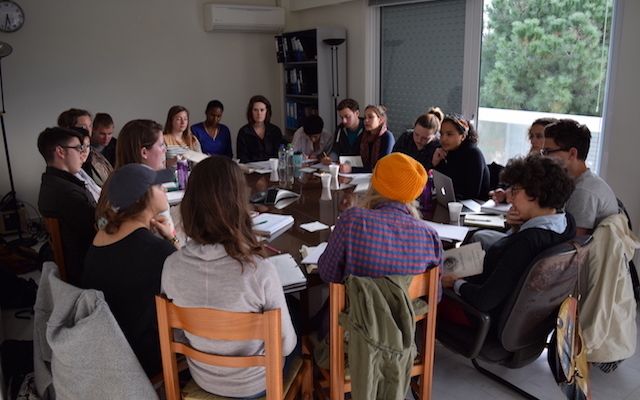 Living life as a Socrates’ fool

Students can move between the Scylla of a museum tour in the stuffed wonders of ancient thought and the Charybdis of the fantasy of a lived experience of ancient Greece itself.

The philosophy classes I teach at CYA are designed so that students can move between the Scylla of a museum tour in the stuffed wonders of ancient thought and the Charybdis of the fantasy of a lived experience of ancient Greece itself.

To communicate the thought of the ancient thinkers as a living albeit old and foundational philosophical reality, I follow a double route: I teach students how to treat the texts as at once the object of interpretation, and an answer to questions we should still be asking ourselves.

To teach interpretation I do the following: I assign free and uncensored reflections on the readings before each class; I often focus class discussion on belaboring an interpretation of a specific bit of text; I invite scholars to give guest lectures on their latest research; we attend philosophical events together, etc.

To teach philosophical activity, I build each class as a dialogue (in the first part I guide students to raise the questions of the texts themselves, then to see what the texts’ answer is and, finally, what their own answers might be); I encourage students to co-shape the class by presenting material they think is relevant to our questions after prior consultation with me; In the syllabus I include modern and contemporary works of philosophy and art, which relate to the questions of the class. In this way students see ancient philosophy at work not only in its historical but also in its synchronic dimension, thus relating both to the field of philosophy itself and the contemporary realities that make philosophy urgent.

This is a small part of what a student wrote in one of his reflections on the class as a whole: “You have asked us to provide “one final reflection, but this time on the class itself. Your free, unreserved, genuine feelings/thoughts about whatever is on your mind in connection to our class.” I have one glaring problem with this request, and that is the implication that the class has ended. Regardless of whether or not twenty-something students of philosophy will be meeting in an Athenian classroom twice a week, or whether or not we each fly away with some kind of letter grade to add to a growing list of classes we call “college,” I don’t think any of us can truly call this course finished. You have done irreparable damage to my attempt to live life as Socrates’ fool, and I don’t think I can thank you enough…

* Evgenia Mylonaki studied philosophy and history of science at the University of Athens, and received her PhD in philosophy from the University of Pittsburgh (2010). Her doctoral dissertation, entitled “From Conflict to Unity: Motivation and Practical Reason”, is an attempt to recast in contemporary terms the Platonic argument for the division of the soul in the Republic. Currently she holds a three year post-doctoral fellowship funded by the Greek State and the EU and her post-doctoral research project is on “Moral Perception and Practical Knowledge”. She also teaches at the program “Plato’s Academy” of the University of Athens. Her main research interests lie within the fields of ethics, politics, theory of action in ancient and contemporary philosophy. She is currently working on the nature of representations of life and practice, on practical reason in ethics and politics, on film and philosophy and on neo-Aristotelianism in business ethics. www.evgeniamylonaki.com