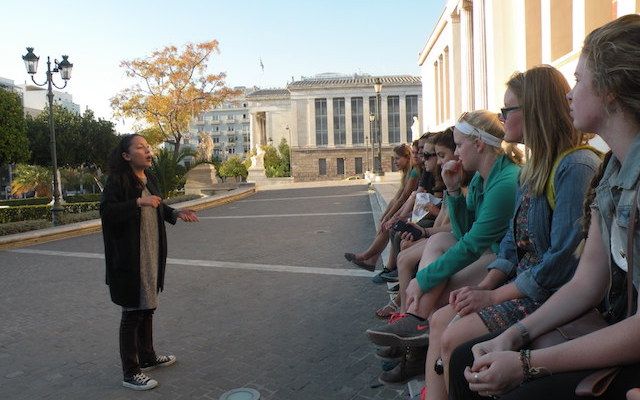 Engaging with the City of Athens

Through a cultural studies lens the students critically engage with the material and cultural artifacts of the city as well as different social spaces and histories.

As a performance theorist I have found that teaching a class at CYA on the history and urban cultures of modern Athens has enriched my thinking and research practices in profound ways.

Through a cultural studies lens the students critically engage with the material and cultural artifacts of the city as well as different social spaces and histories.

Beginning from its founding in 1834 to the present the emphasis of the class is to approach the city as a process and the ways in which it performs its different identities. Thus students are particularly enthusiastic when we walk through the city and find that they are equipped with the tools provided by our readings and in- class discussions to analyze the ways in which, for example, nationalism and modernity can be discerned in neo-classical architectural forms and choreographies such as the changing of the national guard, to how a history of migration and persistent connections to the east can be heard in everyday music or tasted in their taverna meals.

The importance here lies not only in encouraging a more fluent academic capacity for producing knowledge about their objects of study but also, vitally, in a deepening of their experience living in the city as it is felt in the present amongst the inhabitants of Athens.

Furthermore, what is particularly exciting is the manner in which students make their own connections between what we learn about the beginnings of the modern Greek state and its capital city, its 20th century history, and the current national economic and social crises.

This was exemplified in a particularly creative way by a student Ariadne Skoufos, who last year presented to her fellow students on the final day of classes a bust she had made out of papier-mâché of a marble head of Athena covered in newspaper headlines regarding the economic and refugee crisis.

I have found that the visiting students’ imaginative, committed and energetic engagement with the city and our shared time studying together have opened my own eyes and deepened my theoretical readings in new and refreshing ways.