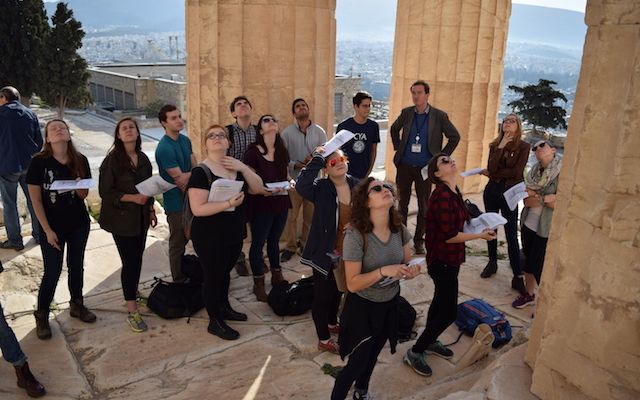 In meeting an architect inside the Parthenon to discuss new discoveries made while restoring that great symbol of Athens, or in having pointed out to them some previously unidentified graffiti on a wall block, our students are faced with the physical remains of those ancient people whose writings they know, but who until then seemed somehow distant and unreal.

Arriving in Athens with a single suitcase as a student on the hunt for Greek inscriptions, I was little prepared for the hold that Greece would take of me, and could not have imagined the intellectual stimulus that being in day to day contact with my material would bring to my career.

Ten years later, apparently having forgotten to pack the case and leave, I try to get across to students the immediacy and tangibility of the ancient world here through contact with the archaeological and epigraphical remains they too encounter each day. It must be the easiest job in the world, and one of the most rewarding. Students with a background in Classics or Ancient History already feel a close bond with the ancient Greeks, having sweated for years over dictionaries and grammars in order to read their great literature.

In Greece that knowledge comes alive in the places they visit, whether following in the footsteps of Thucydides over a battle field, or standing on the same speaker’s platform on the Pnyx where Demosthenes stood long ago to persuade the Athenian democracy of his policies, or reading the ancient names carved into the seats of the Theatre of Dionysos and wondering about those ancient spectators and the plays they had watched.

In our teaching at CYA we endeavour to introduce our students to the latest research, and to engage them with recent excavations perhaps decades before that information ever reaches the standard textbooks.

I hope that such direct contact will bring to life the ancient Greeks to our students as it did for me when I first started sitting down in front of inscriptions and realising that I was reading words carved millennia ago but still speaking to me just as clearly as when some anonymous letter cutter sat in the same spot and set to work.

* Robert Pitt is a Greek historian and epigraphist of the Classical and Hellenistic periods, whose research interests include the Athenian Empire, Athenian Topography, and the financing and administration of public building projects in the Greek world. He is currently working on a book on the construction project to build the Temple of Zeus Basileus in Boeotian Lebadeia, as well as a volume of the inscriptions of Lebadeia for the Berlin Academy’s Inscriptiones Graecae series. As a site epigraphist, he has worked on excavations in Greece, Turkey and Albania. Robert joined the CYA faculty following a posting as the Assistant Director of the British School at Athens from 2007-2014, where he overhauled the School’s teaching programmes and played a prominent role in the establishment of the British – French online digest of all recent archaeological work in Greece, Archaeology in Greece Online.