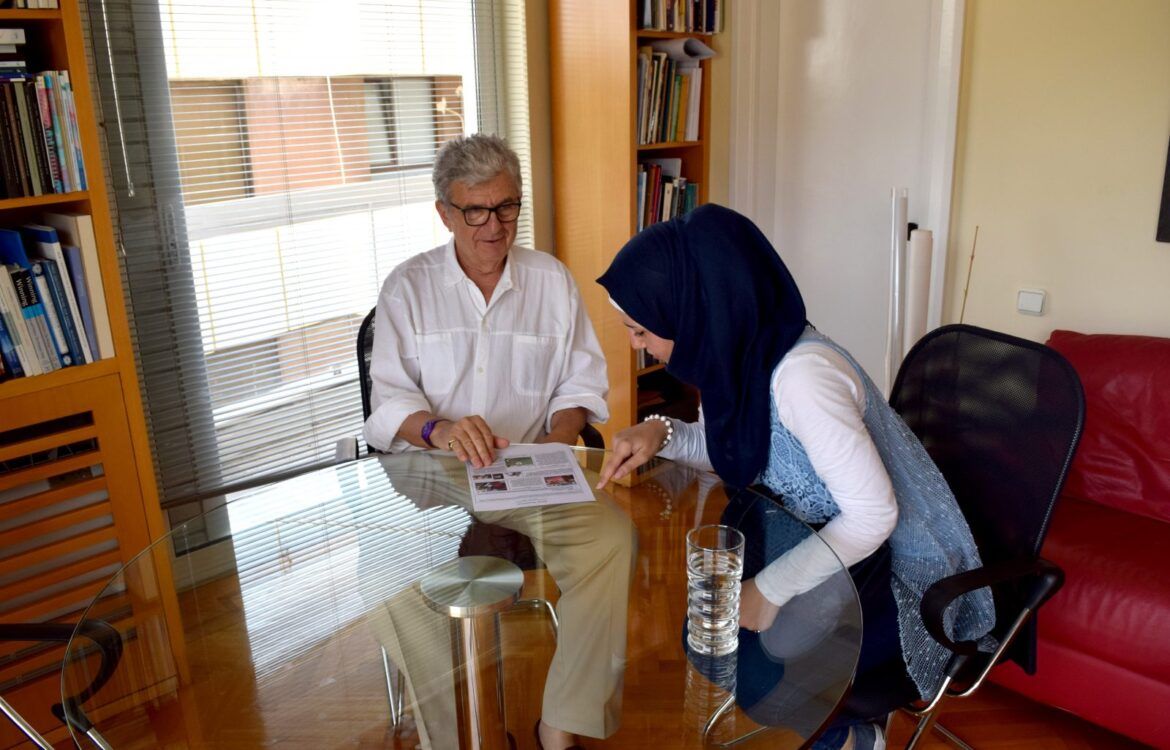 Kitab student, Amar Alsham Douro visited the Academic Centre to interview CYA President Mr. Alexis Phylactopoulos, about his mother Ismene’s story as a refugee. We are pleased to share this piece which was originally written by Amar for the Kitab Newsletter, it is especially beautiful and moving, as it resembles Amar’s own story as a refugee.

To be a refugee isn’t a reason to stop your dream or to think you are a different person. You don’t choose to be a refugee and you don’t think that you may be someday.  When you insist on following your dream, everything will be ok wherever you are and whatever your situation. Just trust yourself and remember you have survived a lot and you can survive anything that will happen.  This is the story about a great woman; she EXCEEDED everything that happened to her and grew into the person she long dreamed of becoming.

The woman is Ismene Phylactopoulou, a Greek woman who was born in 1907 in Smyrna (Izmir) Turkey.  She was raised there, living with her family, which was composed of the parents and three boys and two girls.  They were living their lives normally and happily together until the war between Greece and Turkey came. The Greek-Turkish War was from 1919 – 1922. On 13 September the Great Fire of Smyrna destroyed much of the 17 miles of the port city.  The fire didn’t stop until 22 September. Then the Turkish forces regained control of the city on 9 September 1922 effectively ending the war.  The outcome was the exodus of the Greek and Armenian population of the city and destruction of their quarters, houses and property.

Ismene’s family was one of the many families who were displaced and deported to Greece.  She crossed over on a small boat with her family to Greece.  They arrived on the island of Chios with nothing but their clothes.  The family stayed in a park for two weeks while on Chios, then they traveled to Athens to start over again and to rebuild themselves.[su_carousel source=”media: 2513,1162″ height=”300″ items=”1″ pages=”yes” speed=”700″]

Ismene had a dream and she sought to achieve it.  She studied a lot, and spoke English well, and was given a scholarship from Wellesley College in America.  After four years she finished her degree in the Science of Biology, proof that you can do anything you want to do.  She returned to Greece and founded the College Year In Athens in 1962, and married and continued her life beautifully with her two children, a son, and a daughter.

When she felt homesick she went with her husband and her son to visit Smyrna in 1960, to find her old family house.  It was difficult to find her house because during the war the Turkish forces had burned so much.  After a great effort, she located her family home, which was occupied by 2-3 Turkish families.

Mr. Alexis, her son, told me it was a very influential and emotional moment for her to remember when she lived with her family there.  She cried for all the memories that she remembered then. They left and returned to Athens where she had established her successful life.

In 1983 she died, after having had so many achievements in her life.  Ismene was such a strong woman and she went beyond the war and all the bad things, and she created a great college that has been here 55 years.  We must remember her to learn how to be strong and challenged, to get the conditions we want.

Don’t ever forget that to be called a refugee is the opposite of an insult. It is that badge of strength, courage, and victory.

Thank-you to Kitab for kindly allowing us to share this story.

The Kitab Newsletter is produced by Kitab students and mentors. Kitab is an international non-profit organization dedicated to working with refugee teens and young adults residing in Greece. Kitab students are provided with the resources and mentorship for continuing education, certifications and skills for job readiness and productive world citizenship.