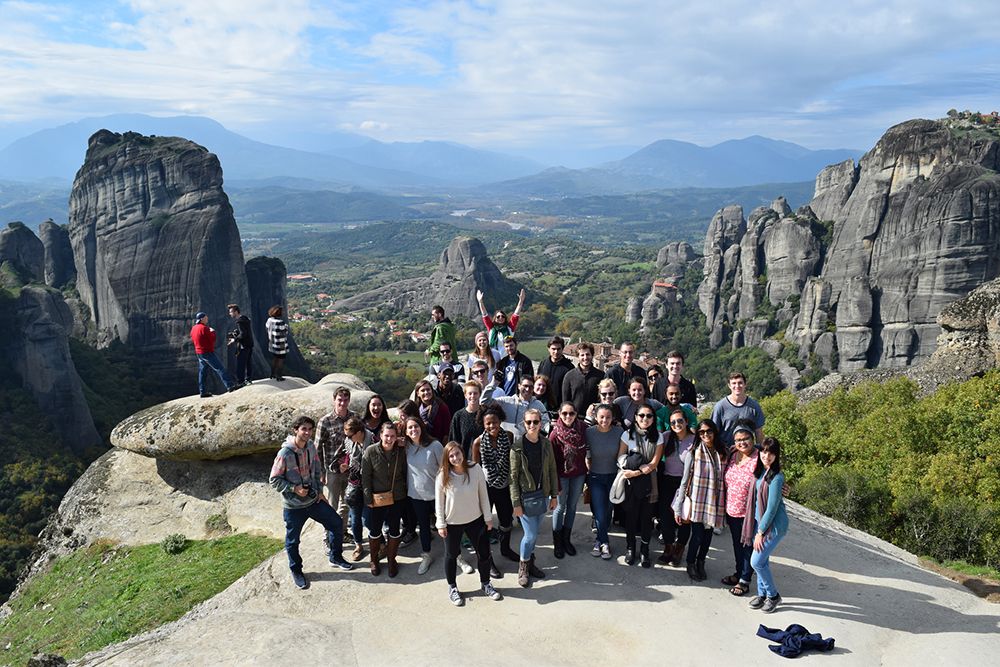 55 Years and Counting… Kathimerini Features CYA, in Honor of its Legacy

CYA celebrates its 55th birthday this year, to mark the occasion, Kathimerini has published a wonderful article honoring our long legacy in education and study abroad.

Now 55, College Year in Athens continues to teach and inspire

Who would have thought that a 15-year-old girl who crossed the Aegean as a refugee in a small boat 95 years ago would become one of Greece’s leading cultural and educational ambassadors? Ismene Phylactopoulou, who came to Athens with her family from Smyrna in 1922, may no longer be with us, but her spirit lives on in College Year in Athens, a program founded in 1962 on the idea of bringing foreign students to study in Greece for one or two semesters – quite innovative at the time.

Now in its 55th year, CYA collaborates with more than 400 universities in the United States and has over 9,000 alumni, more than 200 of whom teach at universities in the US and Canada. Many of the alumni who have returned to Athens to teach at CYA can be found living around its headquarters in Mets, behind the Panathenaic Stadium (Kallimarmaro), while you’ll also find students whose parents met during their semester in Greece.

“The most important thing my mother brought from Smyrna was her knowledge of English,” says her son, Alexis Phylactopoulos, who’s been the president of College Year in Athens and the International Center for Hellenic and Mediterranean Studies (DIKEMES) since 1987.

Thanks to her language skills, Phylactopoulou was granted a scholarship at Wellesley College in Massachusetts, where she studied biology before returning to Greece to teach and raise a family.

“She always maintained her ties with America, to which she felt a deep sense of gratitude since it was where she expanded her horizons. She wanted to offer other young people that same opportunity,” says the CYA president.

“Noticing Greece’s international appeal in the 1960s, she began exploring the possibility of establishing an organization that would bring American and Canadian college students to Greece. It was the time when Melina Mercouri was at the height of her acting career, Manos Hadjidakis had reached a global audience with his music and billionaire shipping magnate Aristotle Onassis was renowned for his Midas touch. Foreigners just wanted to get to know us better,” Phylactopoulos remembers.

CYA was founded in 1962 and five students from the US were the first to enroll. The school follows the American system and is especially known for its classical studies program. Aside from lessons, the program includes many excursions and experiential activities. Moreover, its collaboration with the American School of Classical Studies at Athens is close and the students are always welcome to attend excavations, most recently in Voula on Athens’s southern coast and on the island of Antiparos.

The onset of the crisis, however, brought a drop in enrollments.

“Besides domestic problems, fear of protests and strikes, as well as Greece’s geographic location stoked fear among students’ parents,” notes Phylactopoulos. “They look at a map and think we are just a step away from war zones.” Those who run the CYA program try to mitigate such fears on the other side of the Atlantic.

“Classical studies are losing ground both at home and abroad, so we’ve expanded the program to include new areas of study,” says the CYA president. “This year’s students can chose from courses about the Greek crisis, social media, sustainable development and gender relations in contemporary Greece, among others.”

The students don’t stay within the microcosm of CYA but set out to gain a deeper understanding of Greek society. “Some prefer to be housed with Greek families, but all take part in a variety of activities and volunteer projects, something that is an integral part of their culture,” says Phylactopoulos. In their spare time they teach English at refugee centers, organize creative activities for refugees and serve food at soup kitchens, among other things.

The Greek crisis, the constraints of the country’s bailout program and the economic mess in Argentina tend to send chills down most people’s spines. But for 21-year-old Madison Orozco, an American international relations student, this is the stuff a good thesis is made of.

“I collect material and do research,” she says. “You don’t notice the crisis just by visiting the tourist hot spots. Now though, I’ve learned to notice things like closed kiosks, closed businesses, the pawnshops.”

Twice a week, Orozco washes dishes and serves food to the homeless at a shelter in central Athens. In her free time, she visits museums and churches. She is fascinated by Byzantine iconography.

Madison at a visit to Ag. Spiridon as part of her Comparative Religion course

“Americans believe that Greece is just beaches, but the beauty of the country goes much further than its coastlines,” she says. “The language, the history, the landscape and its geographical location make Greece a unique attraction for any thoughtful traveler.”