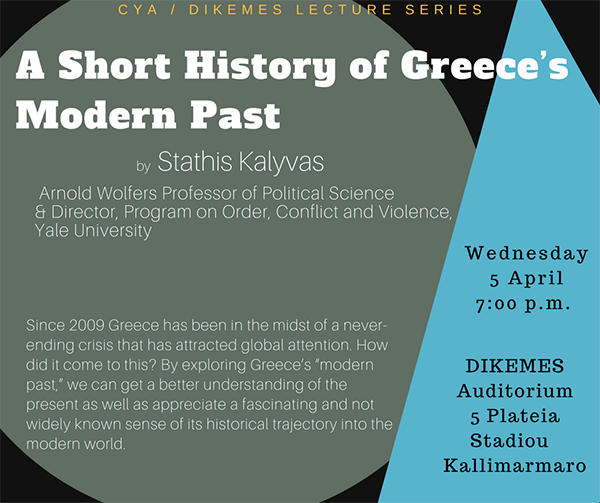 We are pleased to invite you to the lecture “A Short History of Greece’s Modern Past” by Stathis N. Kalyvas, Arnold Wolfers Professor of Political Science at Yale University. This public lecture will take place on Wednesday 5 April at 7.00 p.m. in the CYA Auditorium.

Since 2009 Greece has been in the midst of a never-ending crisis that has attracted global attention. How did it come to this? By exploring Greece’s “modern past,” we can get a better understanding of the present as well as appreciate a fascinating and not widely known sense of its historical trajectory into the modern world.

7.00 p.m. in the CYA Auditorium 5 Plateia Stadiou
Kallimarmaro
A reception will follow

His current research focuses on global trends in political violence with an additional interest in the politics of the Euro zone crisis and Modern Greece. Kalyvas has received several awards, including the Woodrow Wilson Award for best book on government, politics, or international affairs, the Luebbert Award for best book in comparative politics, the European Academy of Sociology Book Award, the Luebbert Award for the best article in comparative politics (three times), and the Greenstone Award for best book in politics and history. His research has been funded by the Harry Frank Guggenheim Foundation, the United States Peace Institute, the Folke Bernadotte Academy, the UK’s Department for International Development, and the Alexander S. Onassis Foundation. He was a John Simon Guggenheim Memorial Foundation Fellow in 2007. In 2008 he was elected in the American Academy of Arts and Sciences.