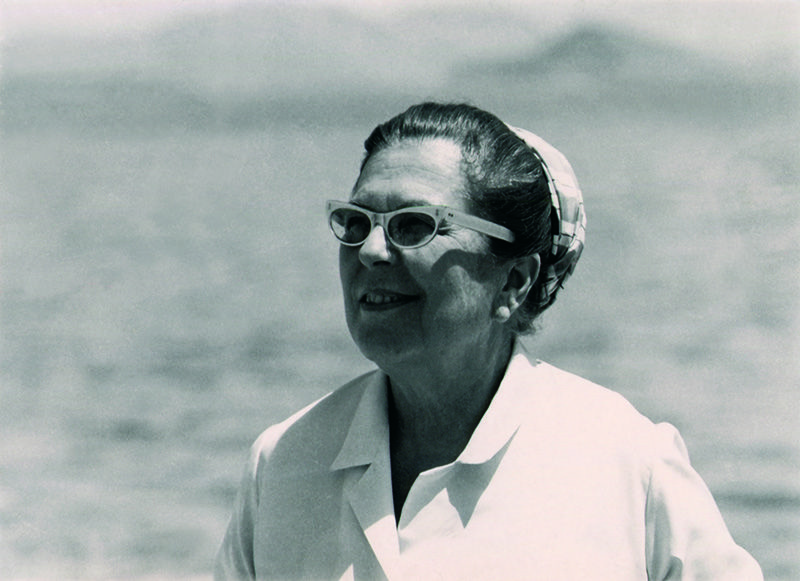 International Women’s Day is a day to celebrate the amazing contributions women make to our world and our future. One such woman, very close to our hearts is Ismene Phylactopoulou (1907-1983) founder of CYA.

Ismene Phylactopoulou had come to Greece in 1922 as a refugee from Smyrna. After graduating from Wellesley College she recognized the tremendous historical and cultural importance of Greece to liberal arts students. Ismene’s innovative idea for the time – studies for foreign students in Greece taught in English, became a reality in 1962 when she established College Year in Athens.

Here’s the story of how it all began, as told by George Phylactopoulos, Ismene’s husband.

…I’ve been asked to tell you how it all started.  It was in the spring of 1962.  One day my wife said to me: “Phyl, please don’t go to your office this afternoon.  The sunsets are so lovely these days.  Let’s drive to Vouliagmeni and have dinner out.”  It developed during that occasion that what was uppermost in her restless mind just then was not so much the beauty of the setting sun as an idea to start a program for American college students.

It’s true that some of our friends in the States had written to her expressing a desire to send sons or daughters to Greece for a year’s study.  She argued that foreign study for college students had expanded greatly after the Second World War and yet there was no learning center in Athens where American undergraduates could study for a year.  Instruction in the Greek universities was entirely in Greek.

I listened to her argument patiently but my reaction was definitely and categorically negative.      I told her that I was clearly, definitely, and strongly opposed to introducing another headache into our lives.  I was head over heels in my work at Athens College, she was teaching at both Athens College and Pierce College, and I counted on her to help me with the social aspect of my job.  There just wasn’t room for anything else, you see, and I had always been under the impression that as a good Greek husband I was to have the last word in everything.  And I did have the last word with the difference that the last word was always “Yes, darling.” “Mrs. Phyl,” as she was affectionately known, maintained high academic standards, and always displayed a genuine concern for each student’s educational and personal growth. She was the Director of CYA for nearly two decades and received the Doctorate of Humane Letters from DePauw University in recognition of her achievements in study abroad. CYA which celebrates its 55th “birthday” this year, collaborates with over 500 universities in the US, has more than 9,000 graduates, of which more than 200 are now professors at universities in the USA or Canada.

Fueled by Ismene’s vision, determination and will, CYA has earned its place as the leading study abroad institution in Greece. Today it continues to thrive and play a tremendous part in the lives of coming generations of students as it has since its very humble beginnings.