Twenty-two CYA spring ’18 students with a keen interest in politics, globalization and world affairs had the unique opportunity to attend the Delphi Economic Forum. Now in its third year, it has been loosely described as Greece’s “mini Davos’. 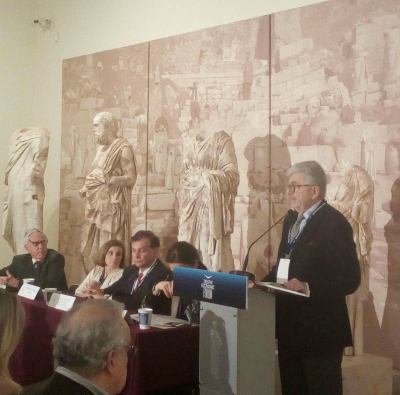 This year the Delphi Economic Forum hosted over 400 speakers spanning the fields of politics, economy, business, diplomacy, and academia, as well as think-tank and media representatives. Among the guests was Alexis Phylactopoulos (CYA President) who presented his topic “Greece: International Education hub” on the panel dedicated to educational policy which took place within the impressive Delphi Archeological Museum.

Led by Professors Romolo Gandolfo and Ritsa Panagiotou, CYA students were afforded this excellent opportunity to be at the center of this prestigious international conference, to network with other young leaders and participate in meaningful discussions with key presenters. Our students left a positive impression on other forum goers by showing keen interest and actively participating in discussions. Many of the students who attended the Forum are currently taking courses on “Crisis and Recovery in Greece and Europe”, “European Union: Challenges and Strategic Choices”, and “Immigrants, Citizenship and Nationalism in Europe” and were naturally eager to learn more about current issues and challenges in Greece and the world .

With this year’s theme focusing on, “New Globalization and Growth Challenges”, Prime Minister Alexis Tsipras and the opposition leader Kyriakos Mitsotakis addressed issues of structural reforms, new leadership strategies and the model of governance. According to students, the experience gave them a better appreciation of the economic crisis in Greece.

Many of our students were attracted to panels on immigration in Europe, and the refugee crisis. Former Polish minister, Marek Belka spoke in one of these sessions raising topics extremely relevant to those studied in our courses, and hot issues in the U.S., too. Glowing Faces! CYA Students and Marek Belka (Former Prime Minister of Poland) and Claus Sorenson (Special Representative of the Danish Representation to the EU) after an exciting session on Migration

“The most rewarding experience was meeting the former Polish Prime Minister and talking briefly with him about current US foreign policy under the Trump Administration and what effects this is having on Poland and Eastern Europe.”    Reilly Rastello CYA SP ’18 University of Notre Dame

Students found discussions on education and the existential youth crisis in Greece eye-opening, as well as talks on the USA/Russia/China trilateral connection. The panels were very dynamic with intense interaction between speakers producing fascinating questions from the audience and discussions. The experience helped students develop their skills in how to best phrase questions especially ones that push buttons.

“I left every panel eager to learn more. Attending this forum has raised new questions for me and motivated me to read and research more to gain a deeper understanding of the many issues.”  Holly Bahadursingh CYA SP ’18 University of Notre Dame

Some of the most popular and well-attended panels covered issues such as:

Professor Ritsa Panagiotou commented that everyone was extremely impressed with the level and quality of the speakers and the discourse in general and how gratifying it was to see students so focused, enthusiastic and organized in planning out the panels they wanted to attend. Overall it was a very enriching as well as fun experience for all.

CYA Spring ’18 student Holly Bahadursingh who is studying Political Science with a minor in Public Policy at the University of Notre Dame summed up her experience at the Delphi Economic Forum:

“It gave me unparalleled insight into the economic, cultural, and political questions Greece and the global community are currently facing. To hear experts in the field discuss various issues and solutions, demonstrated the complexity of the geopolitical order and gave me a new perspective with which to approach my studies.”

Reilly Rastello also from the University of Notre Dame summarised the benefits of going to the Delphi Forum:

“I got a chance to network with professionals. I was able to chat with a former State Department official and current journalist who offered me some good advice regarding my pursuit of a career in public service. I also was able to ask him questions regarding current U.S. foreign policy, particularly towards Europe and Greece. “

“I would recommend future CYAers to attend the Delphi forum because it is an excellent opportunity to hear from experts from around the world who are discussing solutions to political and economic problems facing different parts of the globe.  I learned a great deal about various topics, and I will use this knowledge in my classes at CYA and once I return home to the States.”

DEF was a rewarding experience for all involved, we look forward to extending this great International Conference opportunity to our students again, next spring!

Find out more about DEF here