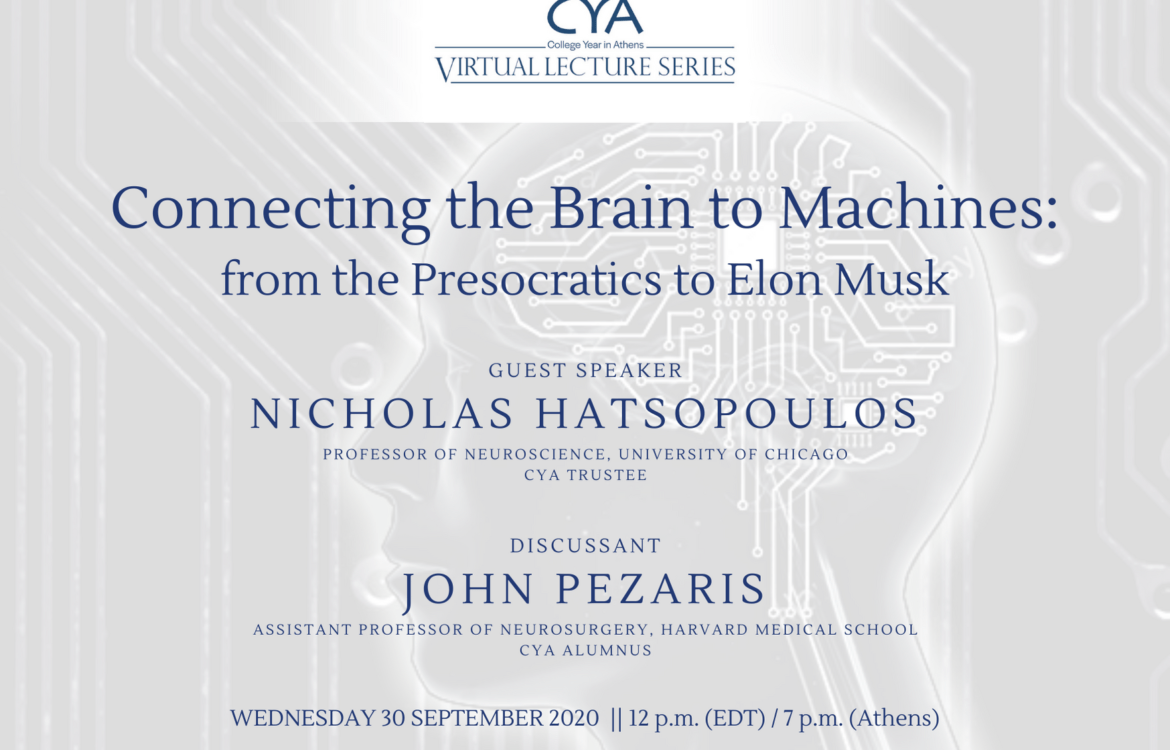 CYA Virtual Lecture Series: Connecting the Brain to Machines: From the Pre-Socratics to Elon Musk

CYA Trustee and alumnus, Nicholas Hatsopoulos, Professor of Neuroscience at the University of Chicago, presented the second illuminating discussion in the fall season of CYA’s Virtual Lecture Series.

In the discussion, titled “Connecting the Brain to Machines: From the Pre-Socratics to Elon Musk,” Professor Hatsopoulos explored the Ancient Greek origins of neuroscience and tied the history of the field to the development of cutting edge technologies to be used in neuroscience.

Professor Hatsopoulos, along with a team of scientists and researchers, study machine-brain interfaces, connecting the brain with machines to help patients with severe motor disabilities improve their quality of life.

Dr. Pezaris currently runs the Visual Prosthesis Laboratory at Mass General where his team uncovers secrets of the visual system in order to restore sight to the blind.

Exploring the ancient Greek origins of neuroscience, Professor Hatsopoulos highlighted both the misconceptions the Ancient Greeks had about the nature of the brain, as well as the accurate theories they developed. Notably, Aristotle, although considered a pioneer in science, believed that the heart was the source of knowledge and thought, rather than the brain. This is despite the fact that Aristotle studied under Plato, who believed that thought was housed in the brain.

Many Pre-Socratic philosophers, such as Alkamaion and Hippocrates, the father of medicine, believed that the brain was the seat of knowledge and perception..

It was not until Galen, a Greek philosopher, and physician from the 2nd century AD, that neuroscience became a field of its  own. Galen conducted the first neuro-scientific experiments and mapped many regions of the brain.

Working in the most cutting-edge fields of neuroscience, Professor Hatsopoulos studies the ways how machines can be connected with the brain  to help those with severe disabilities.

Brain-machine interfaces do not always stimulate nerves to produce the desired effect, such as cochlear implants, but they record neural patterns already present. 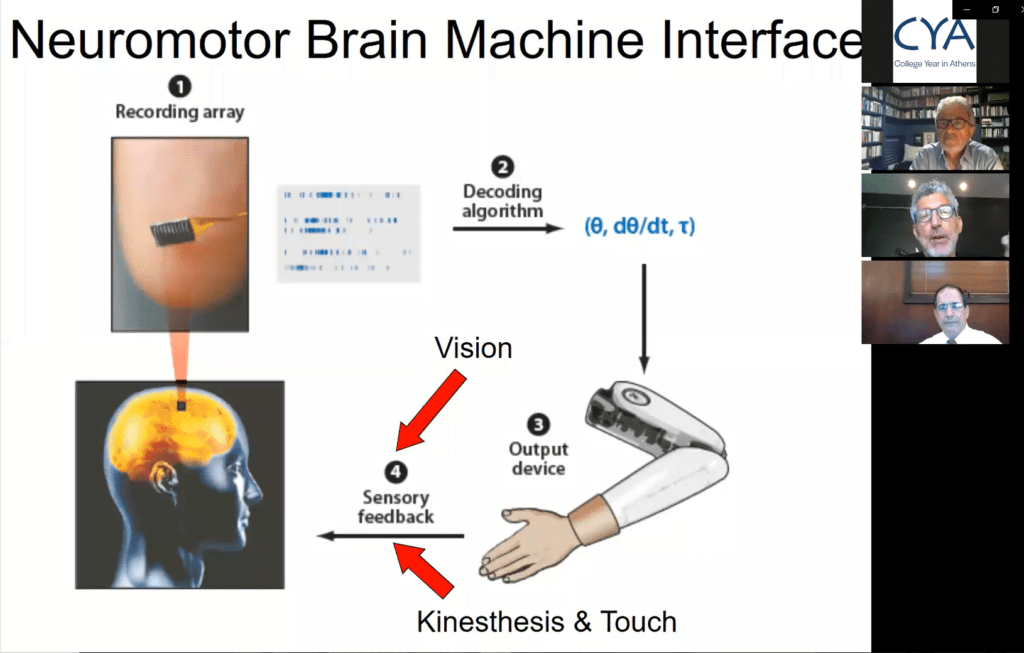 A diagram of how brain machine interfaces work.

The impulses recorded are then decoded by a special mathematical algorithm, almost like translating a foreign language. The decoded signal is then sent to an output device,  a prosthetic device, or even a computer. The output device then translates the signals into actual movement.

In a study conducted in 2013, a man with spinal cord injuries moved  a motorized arm by just thinking of the movement, without controlling it in any other way.

Professor Hatsopoulos expanded on this breakthrough by adding the element of touch. Using a combination of  brain-machine interfaces that record neural patterns (to move a robot or prosthesis), and those that stimulate nerves (to produce a touching sensation), Professor Hatsopoulos and his lab are creating prosthetics that significantly improve the quality of life for those with disabilities.