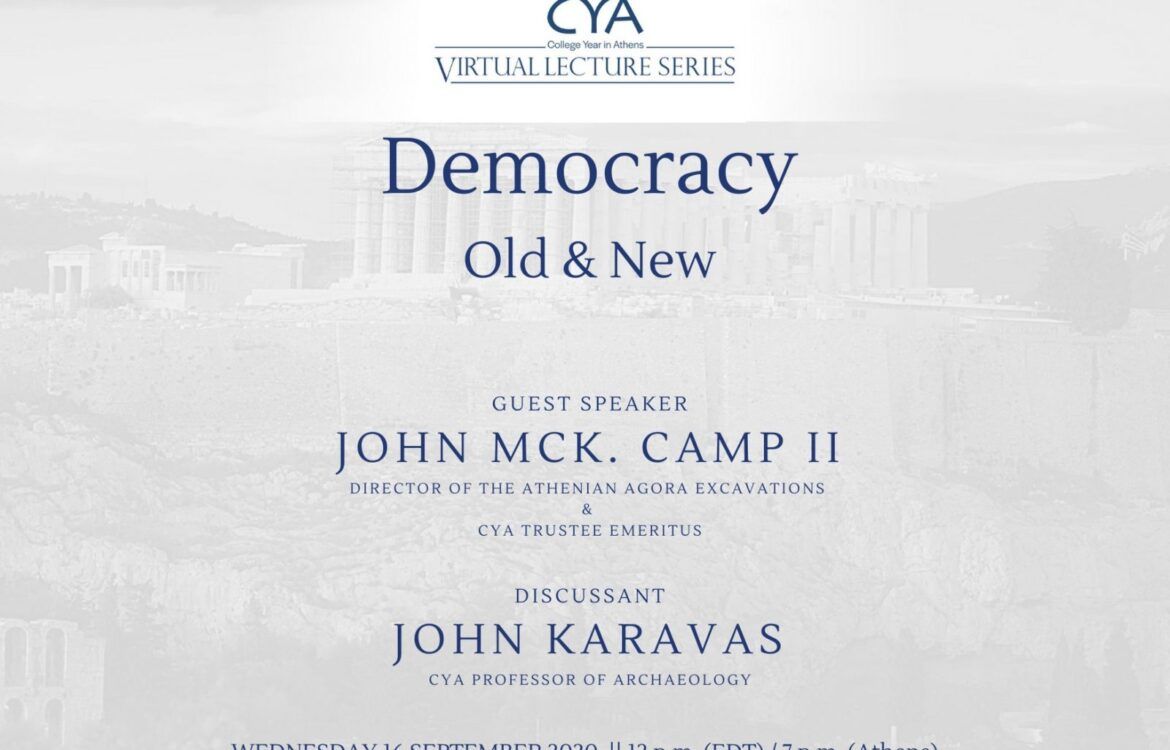 After a series of fascinating virtual lectures over the summer, CYA has renewed its Virtual Lecture Series for the fall season. The first riveting lecture featured CYA Trustee Emeritus, Professor John McK. Camp II, Director of the Athenian Agora Excavations at the American School of Classical Studies at Athens. CYA professor of archaeology John Karavas facilitated the discussion.

In his lecture, titled “Democracy: Old & New,” Professor Camp discussed the history of Athenian democracy, and what it can teach us about contemporary governments, through his archaeological dig at the Athenian Agora. Through studying democracy’s original form, Professor Camp argued, we can implement wisdom from ancient Athens to current political and governmental issues and find solutions to pressing problems.

Additionally, analyzing Athenian democracy through the lens of archaeology can provide exciting new insights into a topic that has been studied for so many years by many disciplines.

Even though the Athenian Agora has been under excavation for 90 years, it continues to reveal new, exciting finds that tell us more about all aspects of ancient Athenian society. Through multiple layers that span thousands of years, the Agora’s soil reveals an intriguing picture of the development of democracy in Athens, which Professor Camp contended was “a gradual process, not a sudden event.”

Referring to modern-day term limits for US politicians, Professor Camp mentioned ostraka found at the Agora. These small fragments of pottery served as ballots, upon which citizens wrote the name of someone who they thought was a threat to democracy. The person who received the most votes was sent out of Athens for ten years. The English word “ostracize” comes from the Greek word ostraka.

Since the ’80s, the Agora has not only served as a critical archaeological site, but also a source of education for upcoming archaeologists. Through the American School of Classical Studies at Athens, a small group of talented students worldwide is given the opportunity to hone their skills as archaeologists in one of the most important sites in Greece.

CYA not only helps this mission by housing the young archaeologists, but also by providing a steady stream of students for the program. Such students have already developed a love for archaeology and an appreciation for onsite, hands-on education from their experience at CYA, making them a perfect fit for the program.