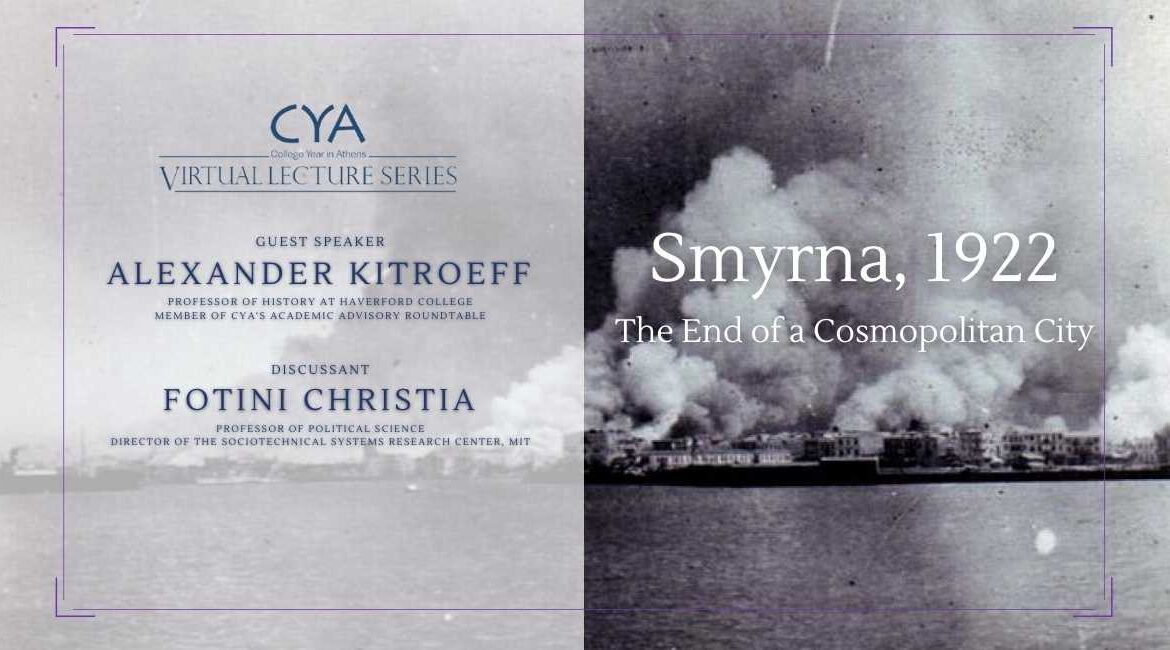 On Tuesday 15 March, the Consulate General of Greece in Boston and College Year in Athens co-hosted a lecture, as part of the CYA Virtual Lecture Series. The lecture, with guest speaker Alexander Kitroeff (Professor of History at Haverford College and CYA) and discussant Fotini Christia (Professor of Political Science and Director of the Sociotechnical Systems Research Center at MIT), was a tribute to the city of Smyrna (modern-day Izmir) and the 100 years since its destruction on the coast of Asia Minor.

Consul General of Greece in Boston, Stratos Efthymiou opened the event, starting with an expression of concern and solidarity regarding the current war in Ukraine. He offered a mention of his own family’s history of life in Asia Minor, welcomed the speaker, and yielded the floor to CYA President, Alexis Phylactopoulos.

Before presenting the guest speaker and discussant, Phylactopoulos took a moment to congratulate Efthymiou for the amazing work done at the Consulate General of Greece in Boston under his leadership. Efthymiou’s tour of duty in Boston is ending this summer.

Phylactopoulos continued to speak about the lecture topic:

“It is of great importance to me personally and to the Hellenic community as a whole to present today a lecture inspired by the centennial of the Smyrna catastrophe. The events of 1922 are significant also to CYA since our Founder and my mother, Ismene Phylactopoulou, was a refugee from Smyrna.”

Then, Fotini Christia shared her thoughts on the significance of this lecture, an element of which was a contemplation on the way history is told:

“This lecture is intended to get us thinking of what a commemoration of such an event can look like. How to remember and teach the history of this and the realities that came from it”.

Alexander Kitroeff thanked the participants and hosts of the event and began the lecture by sharing one of the most iconic photographs of the burning of Smyrna.

“This event, looking beyond that smoke that we see on this photo, is the end of a cosmopolitan city,” he remarked, setting the scope of the discussion.

Kitroeff then went on to offer an incredibly lively description of the city that was Smyrna before 1922. By sharing relevant maps and historical accounts, he described how the city was populated by different ethnic groups, the majority of which were Greek, vividly describing what we know about Smyrna’s Greek community life at the time.

Towards the end of his presentation, Kitroeff compared Smyrna to other cosmopolitan cities like Alexandria, Constantinople, and Thessaloniki, and reflected on the legacy that these great examples of cosmopolitanism offered our world.

“Let’s take that cosmopolitanism with us and not let it fade away, while of course remembering all those people that were tragically lost,” he remarked.

A very lively Q&A session followed, covering topics from the integration of Smyrna Greeks, to comparisons to modern-day conflicts.

To view this interesting lecture, please use the link below: