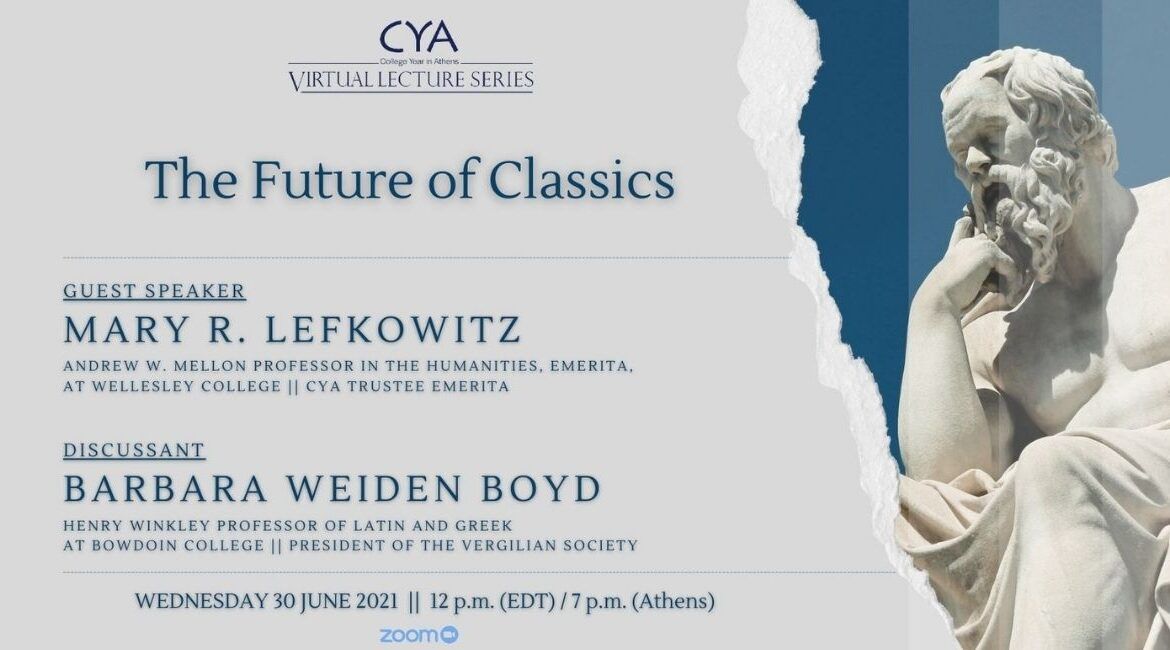 On Wednesday, 30 June, CYA hosted a virtual discussion between scholars Mary Lefkowitz and Barbara Weiden Boyd on “The Future of Classics.”  It was a fitting time for the dialogue, as the field of classics has faced an eventful year. An estimated ten programs have closed at universities worldwide, and Princeton University’s classics program recently attracted attention for its choice to make Greek and Latin requirements optional for majors.

After CYA President Alexis Phylactopoulous thanked attendees, he introduced the two discussants. Mary Lefkowitz is the Andrew W. Mellon Professor in the Humanities, Emerita, at Wellesley College, a trustee emerita of College Year in Athens, and a trustee of the American School of Classical Studies at Athens. Barbara Weiden Boyd is Henry Winkley Professor of Latin and Greek at Bowdoin College and the president of the Vergilian Society. The two scholars have known each other for more than thirty-six years since meeting in a seminar.

Lefkowitz began the discussion by highlighting her historical perspective of classics in the 1960s when there were similar concerns as in the present about whether the discipline could stay relevant. Colleges had started eliminating Latin and Greek as entrance and course requirements to keep up with new demands. Lefkowitz’s belief that classics can adapt now comes from what she and other teachers did at that time: “We didn’t make as many assumptions about people understanding or knowing what the value of the classics would be.”

From left to right: Mary Lefkowitz and Barbara Weiden Boyd in their Zoom screens.

From there, the wide-ranging conversation touched on many of the key concerns in classics today, including improving the discipline’s accessibility and the loss of other humanities programs. Both Boyd and Lefkowitz agreed that classics has failed to “sell itself” in the university, especially to students who are encountering it for the first time and are unsure of its value.

Viewers’ comments drove the conversation towards the role of ancient languages in classics, especially after the Princeton classics department’s new policy. Lefkowitz noted that studying Latin and Greek had been critical in her own learning experience: “As someone who really got into the classics through language, I do appreciate so much and care so much about the study of language as a way to get out of one’s self.” However, she and Boyd both acknowledged that students today may have their first encounters with classics through other pathways, from pop culture to philosophy.

Circe by Madeline Miller and The Silence of the Girls by Pat Barker were among the recent works of fiction with classical themes mentioned by Lefkowitz and Boyd.

Following that, both scholars brought up examples of classics’ relevance in the modern world. Lefkowitz was reminded of Thucydides’s description of the plague at Athens as the COVID-19 pandemic raged on, while Boyd noted how studying the ancient past can build empathy for different perspectives. “We see courses that engage with the subject of slavery, with the subject of sexuality & gender in the ancient world…these are all subjects that are integral to the study of classics today,” Boyd said.

If you are interested in a full recording of the lecture, please use the video below: