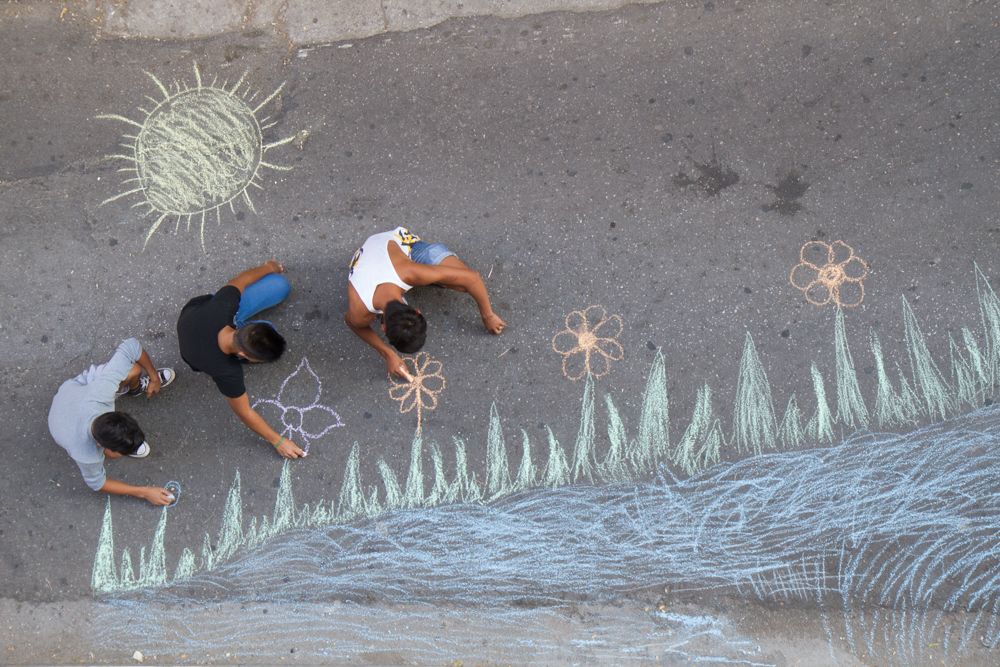 Caroline Barnes and Sandro Cocito ( Spring ’18 CYA alumni) volunteered teaching English all summer at FAROS, a non-profit organization that provides care and humanitarian support to unaccompanied refugee children and youth, in Athens. They prepared their own teaching program that is now continued by fall ’18 CYA students. Find out more about their experience, in the following deeply moving article they prepared for CYA:

“Φταίει η κρίση” was one of the very first phrases I learned in Greek.  Roughly translating to “it’s the crisis’s fault,” it’s a beautifully sardonic catch-all that I often overheard used an excuse for everything from arriving late to work thanks to yet another transit strike; to an explanation for the loss of a job in Greece’s slowly improving  economic climate. Although on the surface it appears to be a deeply cynical statement about the current situation in the country, there is also something fundamentally hopeful about it that encapsulates the experience that Caroline and I had while living in Athens as part of the College Year in Athens program and then during our summer internship at the Greek NGO, Faros.

The crisis, in the confines of the joke, suggests a political event that is by its very nature temporary. Over the course of our semester, we came to understand that the phrase also contains a self-aware acknowledgement of the part that Greece played in creating the current situation and its continued exacerbation caused by certain decisions of politicians and policymakers alike. The seemingly snail’s pace of the country’s economic recovery continues to make daily life tough for millions of ordinary Greek citizens.  What took us longer to fully understand was that the joke also contains a signpost for charting a way out of the toil of everyday life under the effects of EU-imposed austerity measures. These measures have effected change mainly from the top down, often at the expense of ordinary people. By acknowledging that there are larger geopolitical factors at work that are out of their control, the joke helps ordinary Greek citizens develop a sense of distance from the crisis in order to develop an effective plan of action to ameliorate its effects.

Both Caroline and I came to Greece with an academic interest in migration and the ways that it interacts with the current economic and social realities of Athens and Greece.  CYA provided us with engaging classes and a balanced approach to studying these topics abroad. From Professor Karpozilos’s Modern Greek History: From Revolutionary Ideas to the Crisis to Professor Gandolfo’s Immigration and Nationalism in Europe, we were offered an opportunity to engage these issues at a rigorous academic level.  Outside of the classroom, CYA provided an opportunity for us to attend the 2018 Delphi Economic Forum, a trip which offered us an invaluable real world lens into policy making at its highest level.

“It’s the crisis’s fault” took on an even deeper shade of meaning during our work this summer with the Greek NGO, Faros.  Faros provides social and legal services to unaccompanied boys, ages 11-16, who are separated from their families by the current global migration crisis, and is part of a large wave of social service networks in Greece that have sprung up to fill a void that governmental and humanitarian organizations have either been unwilling or unable to step into.

Located in the shadow of the Acropolis and on the fringes of Exarcheia- the old anarchist neighborhood now dominated by the scores of new immigrants awaiting resettlement assistance from the European Commission and UNHCR- Faros is helping redefine what hope looks like for these children. For us, our work at Faros put a human face on the global migration debate, one that is too often couched only in the security language of terrorism or in the economic language of costs and benefits.  Although the aftermath of what’s undoubtedly been one of the largest humanitarian crises in world history has cast a deep shadow over the situation of these children, there’s also something about working with them that’s fundamentally hopeful.

One of our primary responsibilities has been to teach English to the boys.  Tasked also with writing a curriculum for future volunteers, we wanted to know why the boys at Faros wanted to learn English in the first place. “I want to go to Norway to see my mother and sister again, and English is very important for that,” was 14 year old Reza’s answer.   Each and every child had a similar response. While on the surface, this may seem like a deeply sad acknowledgement of family separation at the hands of forces beyond their control, it was also a staggering example of the power of hope. Whether it’s by learning English or wanting to become an engineer to be able to rebuild his home country as one boy put it, Faros’s work with these children is the very embodiment of Vaclav Havel’s statement from another tumultuous political time: “Hope is not a feeling of certainty that everything ends well.  Hope is just a feeling that life and work have a meaning”.

From Reza’s petition to join his family in Norway to the community the boys have formed in the NGO, the children at Faros are forging a way forward. These children are confronting the reality of their situations and working with tenacity and courage far beyond their years to come up with effective plans of action for tackling the challenges they face.  Faros’s recent partnership with MIT to provide technical workshops in things like 3D printing and woodworking to the boys at the center has been a huge boost to their technical skills- and to their sense of purpose and ultimately, hope. Learning English as a way to communicate with a wider audience- to tell their stories and to give them meaning- has been another.

For our part, one of our main summer projects has been to establish a community partnership between CYA and Faros to provide a steady source of English teachers for the newly revamped English program. With the help of Nadia Melionitis and the entire organizational team at CYA, we were able to write an English course (complete with daily lesson plans, worksheets, and activities) that 4-5 CYA students will follow to ensure that the kids will continue to have access to native English speaking volunteers dedicated to learning about a different side of Athens and a crisis that will continue to impact both Greece and Europe for generations.  We thank the staff of CYA and Faros for the incredible experience we have had. It has been a privilege and honor to work with them and their generosity with time and advice is something we will never forget. Above all, we thank Faros for the profound and ultimately immeasurable ways they helped us understand the true meaning of “Φταίει η κρίση.”