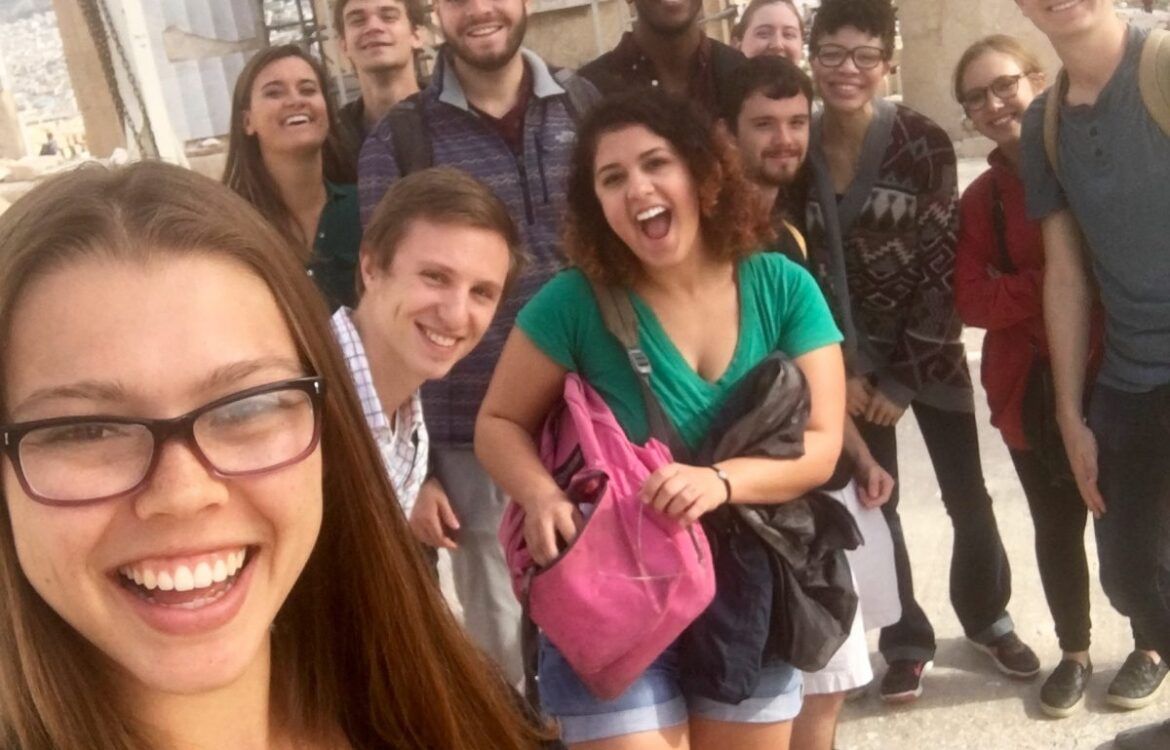 Class Outside of a Room

This semester, students at College Year in Athens have gone on some amazing field-trips: from Delphi, to the Peloponnese, all the way to Crete. We’ve enjoyed tours through amazing archaeological sites and wandered through sunny beaches, rainy mountainsides and a plethora of monasteries and museums.

While these overnight trips are incredible, I think one of the neatest aspects of this semester is the ability to field trip throughout Athens as well. It’s usually a normal Monday or Tuesday; everyone is on campus. We don’t have to pack a bag or make a big deal. We just hop on the metro with a professor or two and go. We don’t hold class on campus; we get to have class outside of a room. The city of Athens is packed with ruins, remnants and reconstructions, and I very much appreciate touring some of these sites with our knowledgeable professors! Definitely at the top of my “wow” list is our class lecture on board the Olympias 2. The Olympias 2 is the only

successful reconstruction of the ancient trireme (meaning, “three”), a naval warship that basically marked Athenian Naval supremacy during the 5th and 4th Our class was the first at CYA to bus down to the harbor, and we were the first group ever granted access to explore below deck! It’s a huge deal for nautical archaeology, and was an incredibly exciting morning for me. Dr. Papadopoulos on the lower deck with students sitting at the oars. Trireme Olympias

One day, we met our professor at the Monastiraki metro station and walked over to the Agora, where we were sent on a scavenger hunt to find the ancient structures that so heavily influenced daily life in ancient Greek. Some groups set off to find treasuries or stoas; my team and I headed for the Temple of Hephaestus, the only really intact structure left at the Agora. After discussing this area for years in class, all of the maps I’ve studied suddenly came to life, while standing under the Athenian sunshine. CYA Students in class at the National Archaeological Museum Athens

The assigned classroom for Ancient Greek Sculpture Class is located on the second floor of the “Classroom Building” at CYA. However, our actual classroom for the majority of the semester was at the National Archaeological Museum, Athens. Most classes, we meet on the steps outside the entrance, obtain our free student tickets, and spend the next hour or so discussing everything from kouroi to marbles to bronzes. When we have presentations, we don’t make Power points and stand at the front of the room; instead, we get to talk about the pieces while standing/sitting right next to them (I’m giving a presentation on the Artemision Bronze Horse & Jockey next week). It makes researching and learning so much more interesting when you can look the statue in the eye. On-site Class from inside the Parthenon. A rare opportunity for CYA students

When you think of Athens, the Akropolis should come to mind. What you may not think of, however, is a professor taking you through the Propylea, then obtaining a permit to go behind the ropes and into the Parthenon itself. Imagine standing in the middle, hearing about the construction methods of such a marvelous feat and thinking about its vital importance. The Parthenon housed the chryselephantine statue of Athena, was the site of the Panathenaic festival, and its existence all but defined Athens itself. The ability to walk around such monuments, or walk through the museum and see artifacts, compare pediments/statues/metopes, and analyze building techniques really brings antiquity back to life when we’re standing there, living in