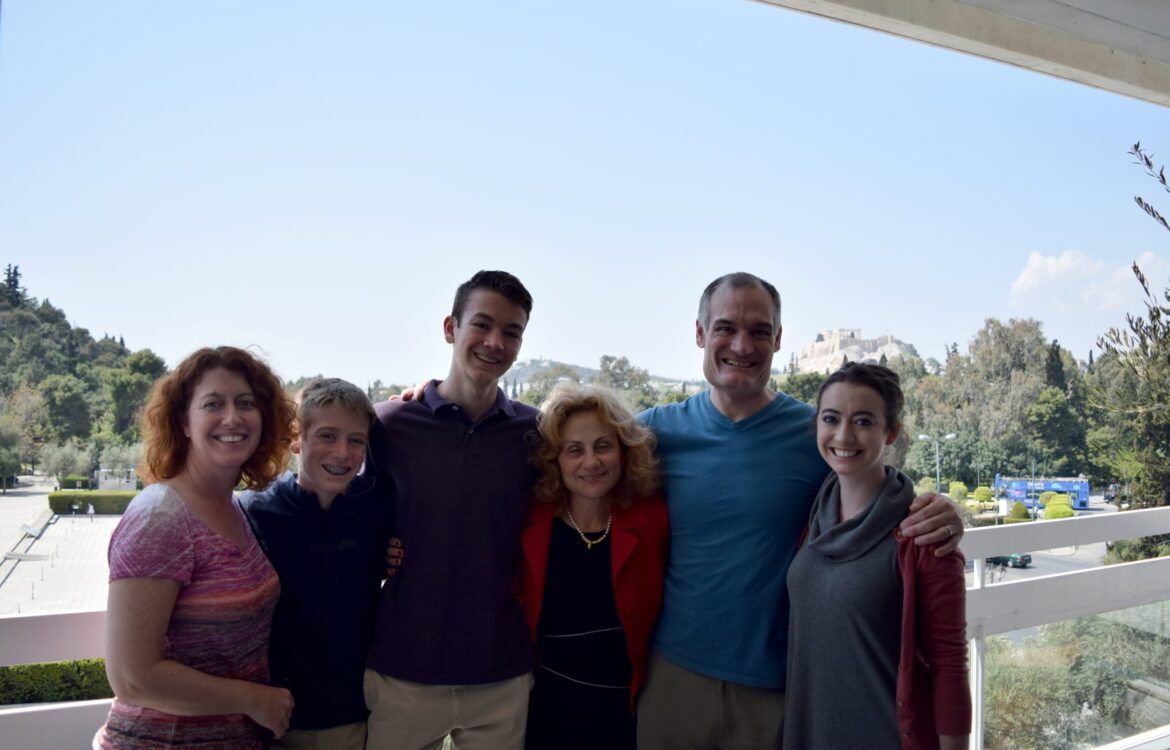 CYA through a Family – Meet the Gallaghers

In the fall of 1990, just a few months after their engagement, Christine and Gordon Gallagher embarked on an adventure – they left North America to study abroad in Greece, with College Year in Athens. The experience was life-changing, and they returned home with a deep love for Greece.

27 Years later, they find themselves once more in the CYA academic center, sitting in the lounge area, gazing at the captivating view of the Parthenon. They have come with their two younger sons, Noah and Gabriel, and this time they are paying a visit to a very special Athenian: Their eldest daughter, Rachel! Rachel studied in CYA during this Spring Semester and has lived her own Greek tale! When the Ghallaghers met, past memories mixed with news of exciting new adventures. Happiness was overflowing.

We spoke to Rachel about her family, herself, and her CYA experience.

What had you heard about Greece before coming here?

So many amazing things, I just grew up hearing about how much my parents loved Greece. One of the best parts is my mum falling in love with Greek cooking! So growing up we would have a lot Greek food.

When my parents came back for the reunion trip in 2007, mu mum also learned how to make Galaktoboureko – it’s been great. I’ve heard about the amazing people, and the culture! Christine and Gordon Gallagher in Hydra, 1990 Were they the ones who encouraged you to study in Greece?

No. I always grew up hearing about it but I really wanted classes taught in English, without wanting to go to England. I wanted to do something that was totally different. So that narrowed things down. I also loved that in CYA I could have a political and philosophical focus and take classes that went towards my major. Greece is gorgeous, my parents obviously loved it so much and they talked to me about it, but I would’ve discovered it on my own!

What were your Parents’ impressions of Greece then and now?

They came three times – in 1990, 2007 and now – so they have seen three very different times in Greece. The first was before the Eurozone, the second was the hype of everything right before the crash, and now, post-crash. They said it just felt entirely different each time. In 1990 it felt more middle-eastern, the Drachma was still used, to make a phonecall they used phonebooths at the kiosk…after visiting in 2007 they said everything was very expensive! And now the prices are a lot lower but it’s so much more modern than the first time they were here. It’s so interesting to observe these changes over different periods of time.

What are your impressions of Greece and CYA? Rachel during the Delphi field trip

I think that I have the same great feelings about it as they did. (It’s crazy that Nadia and Mr Phyl were here when they were here! They said Nadia looks exactly the same! ) Such wonderful people and country, I love the culture and the food – Oh my God. I also love how close Greece is to everything, I’ve travelled almost every weekend!

I think when I go back home it will take a little while to process everything, I’ll say to myself “wow, I’ve done all these cool things!”. Right now I’m on the run but when you finally stop you can look back at it and be like “wow. That was such an adventure!” – and that’s the beauty of CYA, that it’s been an adventure. Rachel and fellow CYAers during a trip to Rome

A lot of us have been travelling around the islands too, which has been so much fun! Not to mention Europe – I went to Rome, Brussels, Vienna, Budapest, Tel Aviv, then Croatia. And it feels like we just got here!

Do you think your little brothers will also come to Greece to study in CYA?

I hope so, it would be fantastic if they did! The Gallaghers in Aegina, Spring 2017