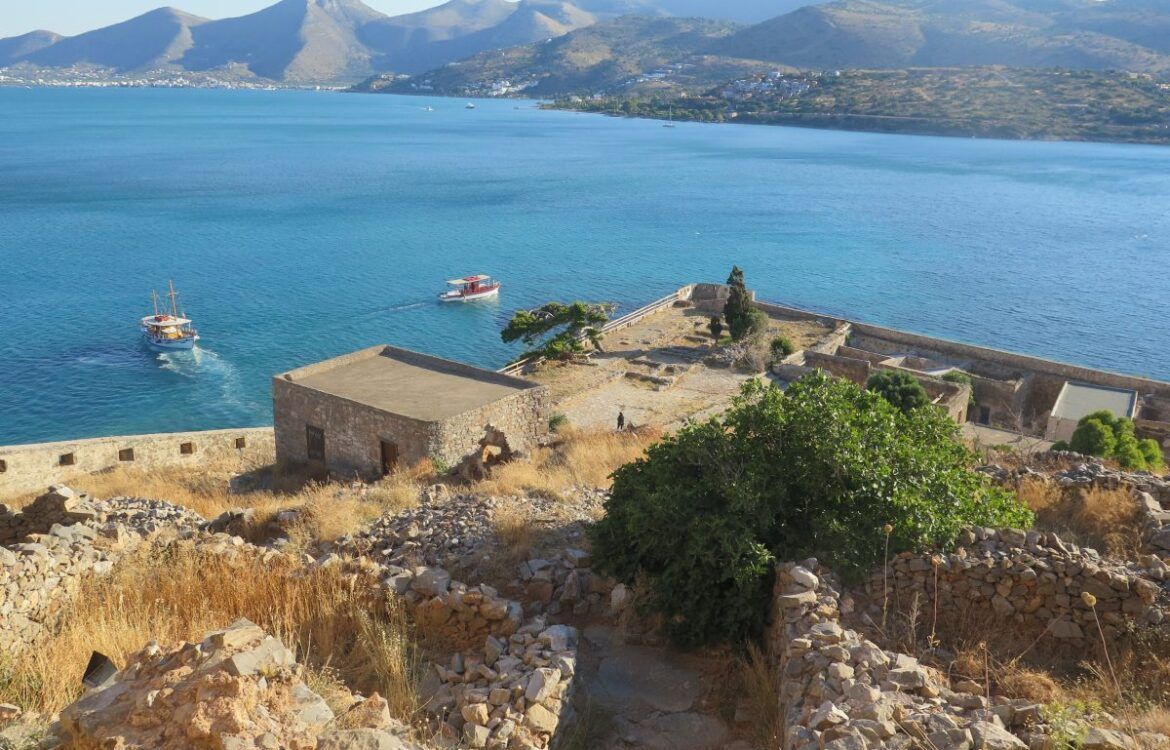 How I Ended Up at a Concert on Spinalonga, the Abandoned Leper Colony

Around four in the afternoon on June 22nd, I departed from Heraklion in a car with musicians and a conductor from Athens. We were on our way to Spinalonga, the once-Venetian, later Ottoman, later leper colony settlement, a small island just off the coast of Plaka in Northern Crete. In commemoration of the fifty years since the closing of the leper colony, the municipality of Agios Nikolaos organized a concert to take place within the archaeological site, performed by a youth orchestra comprised of musicians from all over Crete. The concert was to take place in different locations on the island: within one building, in the Ottoman market area, in one corner near the sea. Organized this way, the music was made to interact with the impressive and historic atmosphere and landscape, making for an incredible performance.

The story of how I got in this car and ended up at such an unforgettable event epitomizes the easy and welcoming sociability and memorable experiences I stumbled into so often while in Greece. One assumes that spontaneous and memorable encounters will happen regularly in a big city one and less frequently in places with fewer people. Surprising then that I ended up in many more unforgettable situations while in Greece for six months than in New York for three years. I believe this to be because what Greece (comparatively) lacks in population, it more than compensates for in sociability and openness

While moving about Greece, I often found myself in highly social spaces: places, events, or groups that would, through some easy interaction, lead to other social events or places. One place that I consider a hub for such spontaneous and memorable interactions is “O Kafenes tou Kagiampi”, a taverna in Heraklion, Crete. Dimitris, the welcoming and loquacious owner, creates a communal feeling by befriending his customers and encouraging them to make discussion with others. It is this warm and inviting atmosphere, more so than the delicious food, that guarantees his taverna is full on most evenings. My first time here, I sat alone at a table facing the street and ordered goat meat over pasta. I pulled out a book to pass the time, but I hardly read a page because Dimitris, the owner, talked to me for a while, asking for my story and what brings me to Crete. Immediately upon telling him I was conducting anthropological research in a nearby village, he insisted I meet an anthropologist working in Rethymno. On a subsequent visit, he called this man on his cell phone, bringing him in so we could meet over yogurt, kefalotiri, and some glasses of raki.

It was in this taverna that I met the musicians who would take me to Spinalonga. I sat alone drinking a Greek coffee, waiting to be joined by a friend, when Dimitris introduced me to a group of musicians sitting at the table opposite. Two of them work and teach at a music school in Heraklion and told me about their upcoming concert on Spinalonga, inviting me to come along.
Over the next few weeks, I hiked, camped and traveled all over the island and didn’t have the chance to reach out to the musicians again before the performance. As the date neared, I feared that I wouldn’t go – New York has inured me to the disappointment of plans that fall through. Yet, a few days before the event, I received a message telling me at what time to be at the cultural center of Heraklion to begin the journey.

On the 22nd, I arrived at the cultural center in the afternoon heat and quickly moved to the shade where stood a violin teacher I knew and the conductor of the largest performance of the evening. In the courtyard, under the sun, a swarm of young musicians bustled about with music stands, instrument cases, and chairs, lugging them to waiting cars or the van which would take them to Spinalonga. We arrived in Plaka around six in the evening. The bus with the performers had just arrived, and they, with their parents and instructors, gathered at the port to wait for the small boats to ferry us across. The atmosphere was playful and full of excitement. As trucks drove down pilled high with chairs and music stands, a percussionist jumped into the bed of the truck and yelled jokes as he rode around. Everyone and everything was ferried across with four boat trips. The musicians and performers set about their tasks of organizing seats and stands, and I took the time to walk around the island, exploring the abandoned buildings and hillsides. When I made it back around the circle of the island, perhaps two hundred people were milling around by the port, having just been ferried across from Plaka. When the concert started, this large group walked through the dark tunnel into the archaeological site. The first performance of three flutists took place within a building with three wide windows and an open doorway around which the onlookers gathered. Subsequent performances took place all around the island, with the largest taking place by the old Ottoman period market; here audience members sat on old walls and outcroppings surrounding the seated orchestra. In the distance could be seen the sea with village and mountains beyond. The last of the pieces were performed in the waning light of dusk. After the concert ended, everyone slowly gathered their things, stood around and talked with one another, and moved back to the port to wait for the returning boats. As we waited under one large tree, we shared apricots and pleasant conversation with the many musicians and guests who came to congratulate the conductor and crack jokes with the instructors. Before heading back to Heraklion, we stopped in Elounda, a seaside village, for a late night dinner of seafood with the organizer of the event.

Though this afternoon and evening stand out in my memory as particularly beautiful and vivid, my time in Greece was full of such spontaneous and unexpectable excursions. Of course, something has to be put down to good fortune, but I attribute so much to the welcoming and open-hearted character that I found in abundance while traversing Greece.